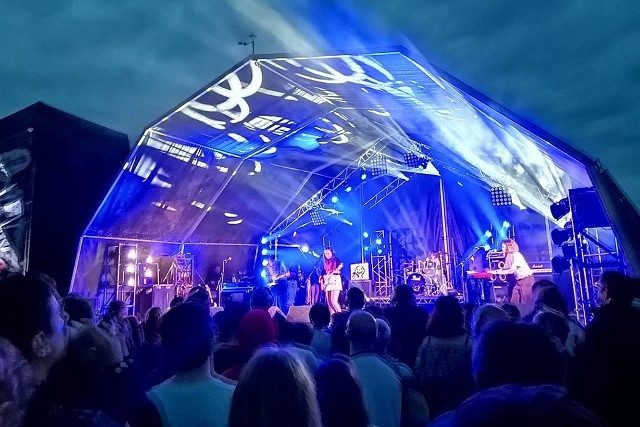 At a time when our daily lives are swamped with stories of hate crimes, transphobia, online abuse… Indietracks is a celebration of something more than ‘just’ music. It’s a safe space, with an ever increasingly diverse line-up, and more women, queer and trans acts than ever before.

From the campsite disco to the train carriage bar – it’s a complete escape from reality for a few days, where everyone is friendly and on the same page. A sort of utopia…based around vintage railway infrastructure. It’s as brilliantly bonkers as it sounds.

It all kicks off on Friday night, when Bis put on a joyful, festival-defining performance. Tracks from their recent album, Slight Disconnects, get an airing, but its the classics – Kandypop, School Disco, Secret Vampires – that get everyone dancing like it’s 1994. They’re followed by The Orielles, whose storming, funk-infused Bobbi’s Second World ripples through the crowd long after they’ve left the stage.

If Friday night is a gentle warm up, things really kick off on the Saturday, when all stages come to life. No one has a better day than Kathryn, of Cheerbleederz and Fresh. First on the outdoor stage with the former – an indie pop supergroup of sorts, featuring members of Happy Accidents and Finish Flag. Dressed in matching jumpsuits, their MO is infectious, melodic, upbeat punk pop. It’s feel good, singalong stuff that’s pretty much exactly what you’d expect from this grouping. Later on, clearly on a high from her earlier set, Kathryn’s vocals soar through the the indoor stage, beaming through lyrics that while sounding upbeat can make for tough listening. Now with two albums under their belts, Fresh feel like the new pretenders to the throne, which Martha have sat upon for the last few years.

Witching Waves win the award for most dramatic set, with original members Emma and Mark forced to take the stage late and minus new addition, Big Joanie’s Estella, who arrives late at the site, and runs on stage, grabbing her bass to join in mid-song, half way through the set. It’s well worth the wait – her influence is felt in tracks from their recent album, Persistence. Their most coherent record to date, its shifted their lo-fi indie up and notch, keeping a few new fans back from the bombastically loud, and much hyped, Porridge Radio, who are playing across the track. 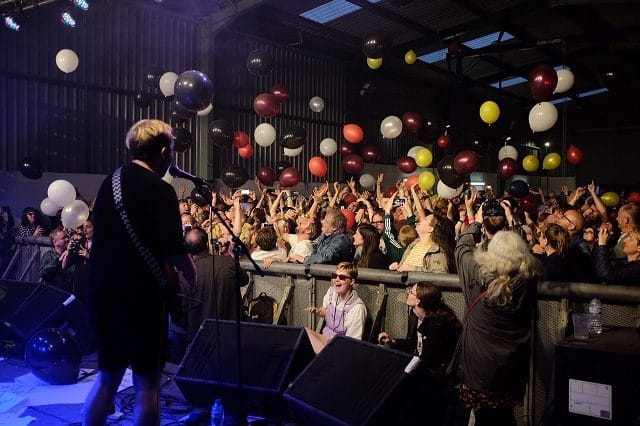 This weekend was a big one for The Spook School. Earlier this year they announced their split, which will come after a series of farewell shows in September. But Indietracks feels like their true au revoir. As architects of the queer indiepop scene, this is their stomping ground. As Niall, their ever-chattering drummer puts it, when they played back in 2012, he was volunteering as a steward too, so it’s a place close to their heart, and there were plenty of tears for a set that felt like a real end of an era – the bubble of blistering hyper-pop that has influenced many bursting on Saturday night.

In fact, it was so important that after a glorious set from the ever brilliant Martha, the band’s Naomi sailed through the crowd on an inflatable dinghy – first into her audience, eventually was carried all the way to the front of the indoor stage in time for Niall and co. When The Spook School sign off with a reworked version of The Just Joans’ tear-jerker ‘What Do We Do Now’ there’s not a dry eye to be found. Niall’s still on good form when, the following morning, his new band Squiggles, play their first ever show. “This is a project to help with our mental health – and I hope yours”, he says. Acting as lead singer, a role he was surely always destined to assume, he bounds about the stage dressed as a low budget super hero, still emotional about the end of The Spook School, but perhaps a bit more hopeful for the future now.

The merchandise tent – or Church of Merch as it’s more commonly known here – plays host to a handful of ‘secret’ acoustic sets a day, and this year’s highlight was Onsind, whose refrain “Never trust a Tory” drowned out all other sound across the festival. Politics echoes throughout this year’s Indietracks, and not just the predictable. Thud, a beautifully spacey, dream-pop band produced by Yuck’s Max Bloom, talk in unnerving terms about the terrifying goings on in their native Hong Kong, while in between the hard thrashings of Molar, the band talk about similarly frightening censorship in Venezuela.

Sunday’s schedule was generally more chilled – with the lo-fi electo pop of Advance Base trickling into the acoustic queerpop of Adult Mom. An exception being Kermes, whose raucous set in the Church earned a standing ovation.

Withered Hand were at their absolute best, with a ‘best of’ set pitched perfectly. From Black Tambourine to King Of Hollywood, they’re campfire singalongs that just get better with age. On the outdoor stage, Stealing Sheep put on a slick show, reflecting the electro-focus of their recent album, Big Wows. Dressed in gold capes, they’re choreographed, with recorded, robotic demands played in between songs. It shouldn’t work at a DIY festival, but somehow it does. As does the hyper dream-pop of headliners Kero Kero Bonito, who are a like a sugar-fuelled, trippy dream, all laid back, spacey vocals over loopy electronics.

And that’s it – apart from the obligatory campsite disco. Two and a half days of perfect escapism, with everyone looking longingly towards next year already.

The Spook School MP3s or CDs

The Spook School on Spotify