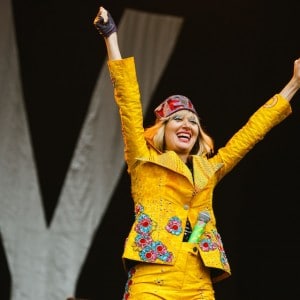 Samstug um Latitude. Anyone wondering exactly how you’d manage to equip 30,000 punters with the requisite eyewear to appreciate multi-dimensional German headliners Kraftwerk were presented with the prosaic answer when wandering through the front gate: one at a time, by hand, from a box.

It must be odd for an artist who could conceivably be top of the bill had he brought his mates, to be first on the bill of the second stage. But if Gaz Coombes is at all uncomfortable with his lot in life though he isn’t showing it. His curtain-raising set is brisk and massively enjoyable. Nonetheless, the best reaction is saved for an acoustic run through of Supergrass’s Moving. As Prince will concur, there are worse ways to start a day than wishing it was 1999.

Steve Mason is running late. He’s the Marcel Proust of the Obelisk arena. But while the time pressures are forcing him to curb the rhetoric, it isn’t totally preventing it. “I’ll keep the political speeches to a minimum… Bastards”, he says, summing it up rather succinctly. It certainly helps that beyond the soapboxing, Mason is a man in fine voice. He rattles through material from his solo career, with a delicate All Come Down and a brilliant Seen It All Before standing out.

We’ll tell you now, of all of the performances we see across this festival, Bo Ningen are the best. They’re the only band who after they’ve finished make you feel the need to turn their name into a verb in order to describe what just happened.

Latitude. You’ve just been Bo Ningen’ed. These four guys, dressed like druids with hair like, um, druids are just amazing. The noise is other worldly. A circle-pit forms part way through; dust begins to rise. Lead singer Taigen Kawabe grasps the air and whispers viscous murmurs as the music rises and swells and envelops everyone present. It is totally brilliant.

There’s something in the air for Daughter. Rain. There’s rain in the air. So there is a slight hint that it isn’t just the band which has caused one of the 6Music tent’s biggest non-headline crowds of the day. Ah, the humble roof. Attracting people inside since neolithic times.

But no doubt, Daughter are a big deal these days. Although they seem visibly astonished by the numbers present, the London trio are one of the highlights of the entire weekend, the performance swinging from moody and intense to feather light, occasionally within the same song. Endearing and enthralling in equal measure, this feels like a band whose time has come.

Torres finds herself lonelier, but no less intense. Introspective, confessional and with a burning fire raging inside of her. It’s a wee bit difficult to watch her wrestle these seemingly oh-so personal songs from just electric guitar and her soul, but it’s hard to forget.

Latitude has smartly mixed up the more serious acts on day two with some more radio-friendly artists, and while Jessie Ware does sometimes project the demeanour of a T4 presenter on heat, it’s very difficult to deny the quality of a clutch of the songs she turns in. Many of the slower, less distinct album tracks are only carried through by the force of her personality, but Running and Wildest Moments are like catnip to the sun blushed crowd.

It’s difficult to get too worked up about Everything Everything‘s appearance on the 6Music stage – which can feel astonishingly intimate when presented with a wonderful band and slightly desolate when watching a middling one. Despite the band’s USP of falsetto lyrics and oscillating between genres, it doesn’t feel that for a group with pretensions of innovation, there’s anything new here. It feels a little lumpen.

Back on the Lake Stage, Australian psych-rockers Jagwar Ma seem designed for hazy, sweltering afternoons like this. Their set is punchy and swathed in woozy harmonies that do nothing to dispel the idea of the band acting as a missing link between Sgt Pepper-era Beatles and Madchester bands like the Stone Roses. While the band may not quite have a full enough repertoire to pull in a sizeable crowd, there’s hope that they may not simply be a bunch of revivalists looking for a new idea.

Talking of new ideas, here’s Karen O’s wardrobe. While Kraftwerk and, slightly more bafflingly, Hot Chip may be billed above them, the Yeah Yeah Yeahs attract the crowd and garner the reaction which suggests they are going to be the standout set for many. It takes a bit of time to get going, but from Cheated Hearts onwards, it’s a freaky, fizzy, fabulous feast. A brilliant closing salvo of Y Control and the clattering art-punk rampage of Pin and Date With The Night is delivered with such enthusiasm it makes you feel as if they’ve never done it before.

It’s to the detriment of Mark Lanegan that he clashes with both the Yeah Yeah Yeahs and Hot Chip, but that doesn’t stop America’s gruffest growl putting in a gutsy performance. At his best when he’s channelling Tom Waits over sparse blues backing, the crowd do lose some interest towards the end of the set.

Away from the bleeping iciness of the main arena, Alt-J are treated as homecoming heroes, making the leap from low-down the bill last year to second stage headliners today. This represents their stratospheric year in a microcosm – the tent jammed to the rafters with an adoring crowd singing every word back at the band, and every song treated like an old friend. It’s a wonderful, defining moment for a band that will be last on at hundreds of festivals in the future.

Closing the Obelisk arena Kraftwerk bang out the hits. If by bang you mean smoothly assemble a set of all of their best known material, shove it together with the much vaunted 3D effects and dispatch a set with no mess, no fuss and a great deal of enjoyment.

All while displaying more congenial on-stage chemistry than Bloc Party did the previous night. It contains what you might expect. A fantastic Radioactivity, a effortless meander through Autobahn and perfect recreations of Tour de France and Trans Europe Express. And yes, with the glasses on, the visuals did work. It did look like stuff was flying straight at you.

It was an efficient performance, efficiently received.