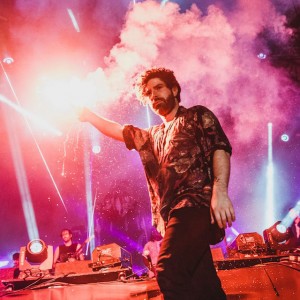 “Is it alright if I take my time, and do it right?” Bobby Womack asks the Sunday morning crowd. It’s a bit disappointing however, to see the response err more towards the “Nah Bobby. Just do what I do: get it over with as quickly as possible, then roll over and try and get back to sleep”.

The big old crowd for the bravest man in the universe is treated to a fantastic performance, but the response seems a little bit muted. The mechanical, physical signs – of waving when Womack tells us to wave, of applauding when he introduces his band – aren’t universally replicated. It feels a little sad.

Still, he sounds amazing. A great voice, a great setlist and an expert, honed approach to his performance. “You can’t do the same thing every night,” he tells us about creating music. “It’s like making love. You’ve got to surprise them”. Ms Womack’s response to last year’s collaboration with Damon Albarn is currently unrecorded.

It’s not really Laura Mvula’s fault that she’s only got one song that anyone’s ever heard of. Admittedly, it’s a great song – you know, the jazzy one with the vocoders and the people in the garden and the butterflies – but also pretty unrepresentative of the rest of her canon, which errs more on the side of soul and RnB, with a few folky touches. She puts in a cheery and spirited performance, and almost wins round a rather lackadaisical audience – yet there’s the nagging feeling that they’re cheering for her rather than her music.

The Tallest Man On Earth’s set to a by now gently baking crowd fulfils the languid Sunday afternoon hangover cure spot with aplomb. One man, a guitar, and a Bob Dylan fixation; there’s a virtuosity to his fingerpicking and a nice line in leaping about the stage and howling, but again, an unresponsive crowd staring into their pitchers of Pimm’s can’t work up a great deal of enthusiasm for the lofty Swede.

There’s plenty of enthusiasm for Hookworms though. Loud, swirling and uncompromising their set in the iArena is an eye-opener, an ear-pinner-backer and a unreservedly fine thing. A set which sees the band going about their business, of droning shock and awe psychedelia with utter conviction.

As Latitude is, frankly, rather easy fodder for a stand-up comedian, it’s a mark of either Eddie Izzard’s affection for his crowd – or more likely the fact he’s trotting out a set that he’s done a hundred times before – that he fails even to mention the sheer scale of the feta cheese available onsite. Unlike Dylan Moran’s charming and apparently pieced together on a whim set the day before, Izzard is deadpan, effete, intellectual, and only quite funny. Swerving through politics, religion and linguistics, it’s an enjoyable but relatively flat affair.

Local Natives – the most likely of the current crop of intellectual American rockers to ‘do a National‘ – have a series of genuinely affecting moments during their hour long appearance on the main stage. Apparently designed in a laboratory to make bearded men in their 30s weep onto their lumberjack shirts, the band are at times muscular, ethereal, spellbinding and slightly samey. At their best – new tracks Heavy Feet and You and ! – they inspire the kind of reverential acclamations that usually use a clumsy metaphor to about phosphorescent light to describe their music.

It seems everyone under the age of 20 in Suffolk has packed into the 6Music tent to see chart topping dance/hip-hop/dancehall/whaddever act Rudimental. They promptly blow every other act at Latitude out of the water with a performance of such utterly earth-shaking charm, gleefully earnest love for their audience and absolutely storming party tracks you wonder what on earth you were doing considering going and seeing Friends in a forest glade in the first place.

For Friends – a group whose constant line-up changes suggest they should invest in another moniker – play the kind of gruesome Williamsberg funk-revivalist dirge that really needs to get in a gondola – yes they have those here at Latitude – and travel the 200 yards to see someone actually making music that people want to dance to.

The horrifyingly fresh-faced Disclosure’s appearance can’t really be described as much of a show (none of their myriad guest vocalists put in an appearance, and brothers Guy and Howard Lawrence remain chained behind their laptops). But their brief set is peppered with songs that have already entered the lexicon, and there is an air of quiet, steely determination behind the rapturously received tracks that suggests that simply having a Number 1 album before the age of 20 is just the first step in a very long career.

Following Grizzly Bear‘s spirited but ultimately fruitless attempts to raise their set above pleasant, it is over to Foals to bring Latitude 2013 to a close. And you’ve got to say they pull it off. They’re a band with something to prove, who manage the neat trick of actually proving it. It’s fiery (literally, as Yannis Phillipakis wanders around the stage with a lit flare), impassioned and full of brilliant songs. Indeed, the encore of Inhaler and Two Steps, Twice is as good a duo as is heard all weekend. It feels like a performance that matters to them, and those watching respond in kind.

It’s a fine end to the eighth Latitude Festival, and a timely reminder that it can also be more than just the best festival for families.