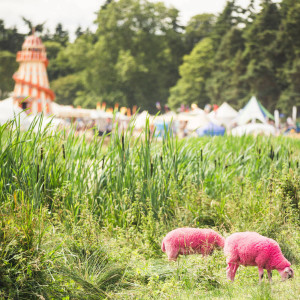 Pink sheep, a feature of Henham Park
(Photo: Dan Medhurst)
This year Suffolk’s Latitude Festival turned 10. In honour of this, we took 10 hours stuck in nose-to-tail traffic to get there.

A decade in, the temptation is to label Latitude as a safe, friendly, unthreatening festival. Which isn’t strange given that in many ways, it is. If you’re a parent, if you’re a child, if you’re a portable chair salesman, if you’re a full-on granola eating, hoummous-dipping, lily-livered liberal, it is a festival sporting much appeal.

But equally, you really could make the argument that they are one of the few festivals to take any risks with their bookings. To give acts the support to go from breaking to broken to bigger than Jesus and to be given a chance to make a step up onto a larger – literally – stage. This year it was alt-J, last year it was Foals. In 2009 a certain Florence & The Machine stepped into the breach. If you’re an act looking for that shove into the stratosphere – in music and beyond – Latitude is definitely your friend.

It’s also your friend if you like swimming in a lake, gazing at pink sheep, whittling wood or attempting to get into tiny, secret sets by megastars. Although, that’s definitely ‘secret’ in a way that makes you hope that the bookers are never granted custody of any confidential Government material, upon which the safety of the state depends.

So settle down, strap in and let us run you through the things which occurred in a dusty and sunny park in Suffolk…

Summer Camp can definitely open a festival. Being the first act on a main stage is a hard, forlorn, thankless task, but Summer Camp charmed their way through it. A fairly keen crowd are treated to a blend of melancholic sunshine vibes. It’s broken hearted, but sipping a mimosa. 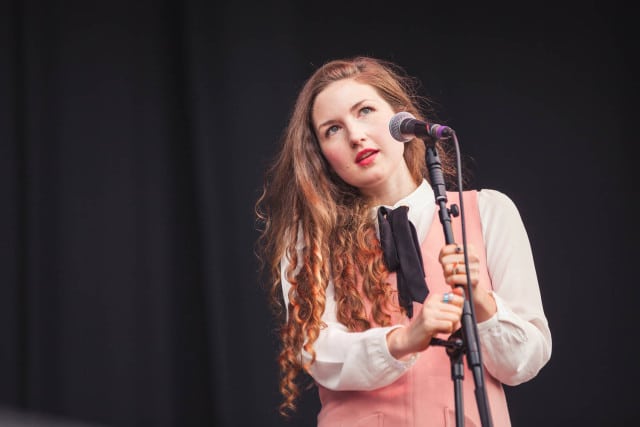 Ed Harcourt is still here. Fourteen years after the release of Here Be Monsters, he’s hairer and a little less Wainwrighty than he was back then. Furnace has a particularly emotional punch and he absolutely beams at the response he gets to a passionate performance. 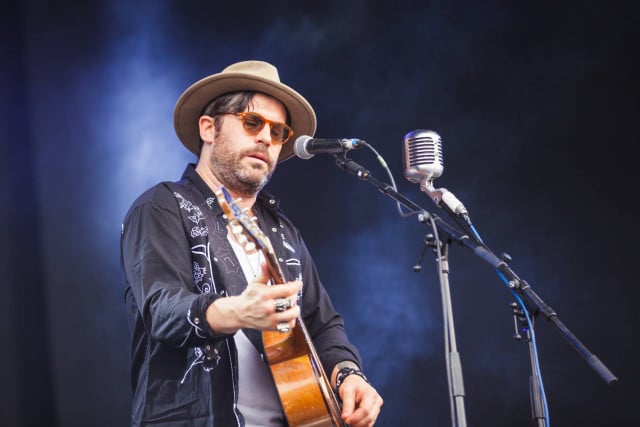 King Gizzard And The Lizard Wizard are more fun to say than to watch. They get a huge crowd in the iArena to watch their psychedelic jams, stretched and elongated to breaking point. It’s groovy. For a bit, but it does wander into directionlessness and then, sadly into boredom. Although huge amounts of kudos to them for flaunting their flautist.

Femi Kuti seems like a bank manager on Stars In Their Eyes playing Fela Kuti. If Seun Kuti is the chip off the block, it’s brother Femi who gets the old man’s band The Positive Force. But for all his energy and obvious passion, he’s oddly quiet, going through the motions. Today on the huge main stage he’s never quite the centre of attention Fela was, or that he should be. 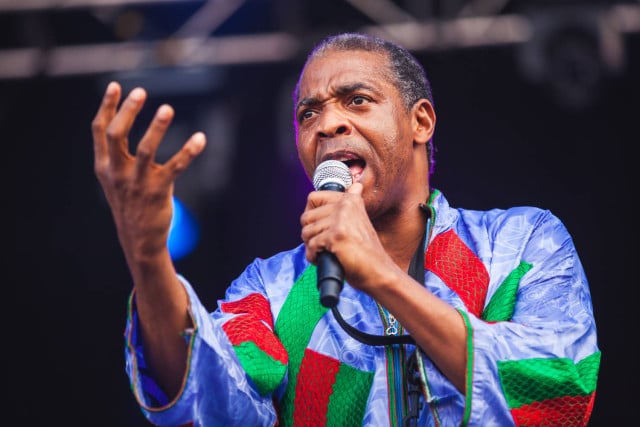 Wild Beasts seem a bit subdued. At times they sound great; Wanderlust in particular still leaves a wonderfully bitter aftertaste. But for a band who a couple of years ago headlined one of the other stages there’s something about this performance which seems like the band are wondering what went wrong.

Caribou nail it. While Dan Snaith’s occasional sideways glances betray a sense of not entirely understanding why people are all standing there looking at him, Caribou are a triumph. Can’t Do Without You is the first proper ‘moment’ of the night, a massive euphoric sing-a-long which then slides brilliantly into a storming version of Sun that leaves everyone with hands in the air. 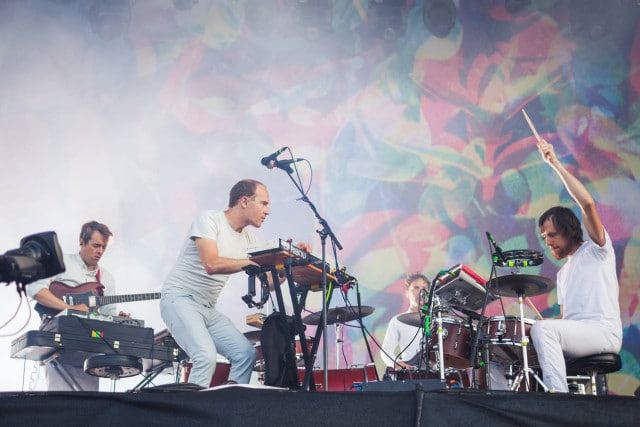 Caribou (Photo: Sam Neill)
Jon Hopkins doesn’t. Another thing Latitude are good at: pushing electronic acts high on bills, and Jon Hopkins is one at the peak of his popularity. But even despite the impressive visuals (where exactly do you get LCD hula hoops), his set in the 6music tent just doesn’t quite work out, stuttering rather than thumping, despite the huge dual presence of Collider and Open Eye Signal in the set. Odd. 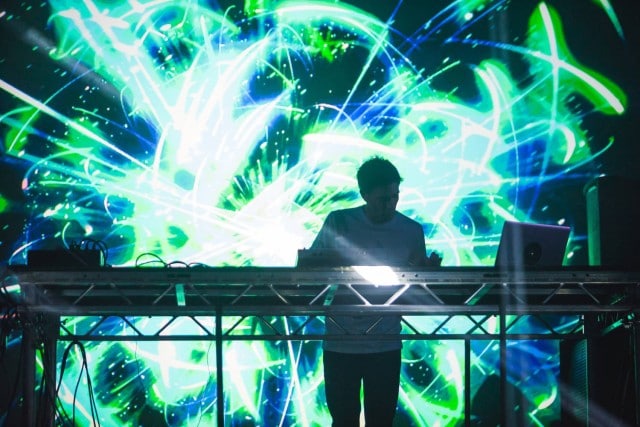 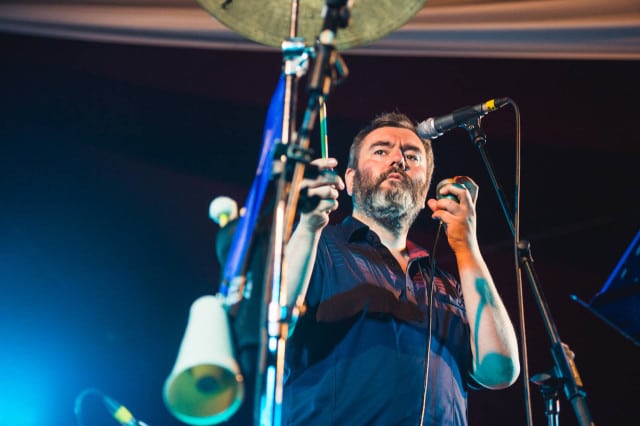 Drenge are heavier and nastier than anyone has any right to be while drinking tea. Standing In The Cold is slow and punchy, Running Wild is full of adrenalin to it, and the whole set is primeval and as purposeful and properly edgy. The tea? “Phenomenal” states Eoin, clutching his mug like a trophy.

Nadine Shah can’t quite manage to be child friendly. There are a lot of those [kids] about, so you could understand why she’s trying, but there is actually a more specific reason behind it – her drummer’s kids are watching. She nearly manages it and then makes an off-hand remark about being penetrated by her keyboard stand that leaves her clutching her mouth. So while not quite as garrulous as normal, her set is as beautifully poised as ever. Stealing Cars remains a swooning, romantic belter and it’s possible that the lurching, clanking Aching Bones is even better. Shah is someone who surely will be gracing a bigger stage before too long. 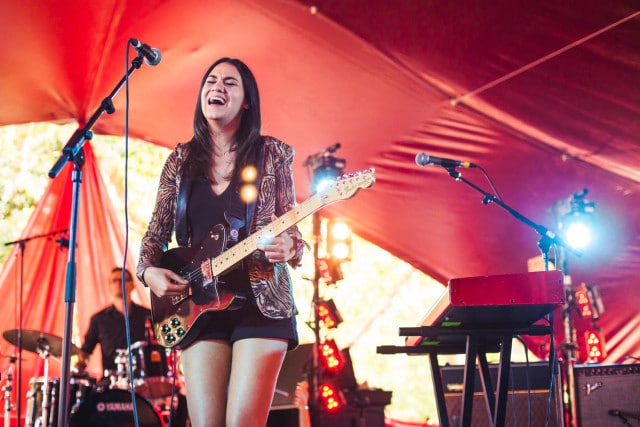 The good times are never ending for The Charlatans. Granted, the crowd may visibly switch a demographic between their set and the proceeding one from Wolf Alice, but the degree of animation doesn’t. And actually, it’s hard to think of a more joyful and effervescent performance than the one performed by Tim Burgess and co; a series of anthems delivered with vim and vigour by a band who sound totally energised. 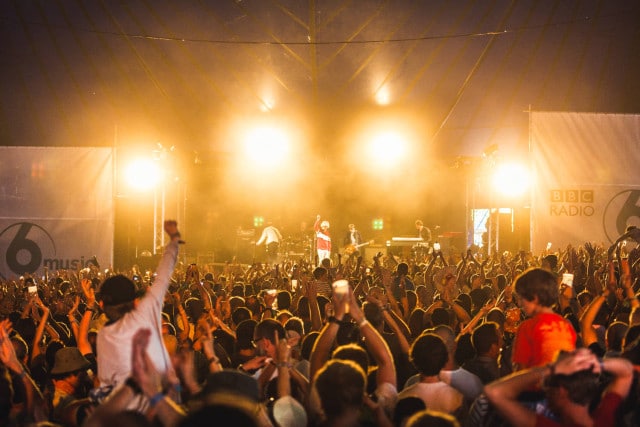 Savages are unstoppable. It’s been coming for a while, the performance at Field Day certainly signposted it, but it’s becoming hard to come up with new superlatives for Savages. The tracks from the next album sound incredible: Adore is vast and cinematic. Sad Person is defiantly menacing and of the older ones, well, let’s just say the front row of this particular crowd, treated to an audience wander from Jehnny Beth, won’t be forgetting Hit Me and Fuckers anytime soon.

Portishead are simply brilliant. They may not have released an album for seven years, they may not play any songs which we don’t already know, but there is not a whiff of nostalgia about the set. The beautiful fragility of Wandering Star leaves the Obelisk Stage audience near silent. Glory Box is sticky, woozy and unforgettable and a stunning Machine Gun is charged and full of anger. During it shots of David Cameron’s pug-ugly visage flashes up on the screens, blue lights beaming from his eyes cut alongside scenes of riots and protests and the words FIVE MORE YEARS. It’s surely the most political statement a band at this festival make.

During the encore Beth Gibbons startlingly legs it down the ramp at the side of the stage and flings herself into the crowd in an act that can only be described as surprising. But even this is beaten in the surprising stakes by the front man of Radiohead wandering on during the encore. Thom Yorke helps out on a gorgeous duet version of The Rip, and respects the headliners’ status with an unassuming bow and wave. Brilliant, brilliant stuff. 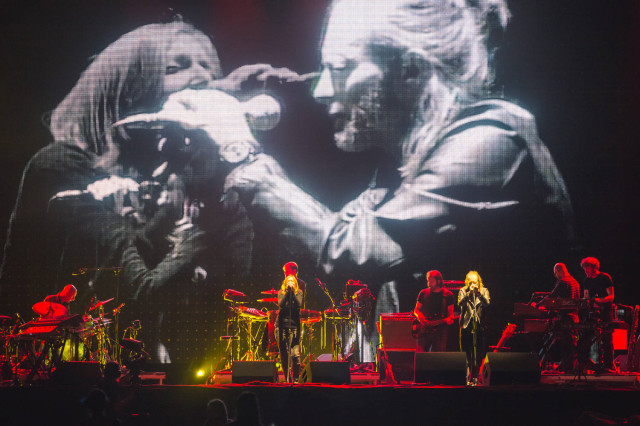 Is Thom Yorke the new Sting? He certainly doesn’t know when to stop. Having guested with Portishead, up he pops for his own not-quite-secret gig at the iArena, a little tent in the woods, and bashes through technical problems with glitches, wails and the occasional twang. This is not a rolling-out of any Radiohead works but rather a chance for the man-bun exponent’s two solo albums to shine. Periodically they do in a set that drags on for an hour and 40 minutes through till after 2am, but which still felt like an event for those who’d managed to get in before the barriers shut off the flow and the security had repaired the breached fences. 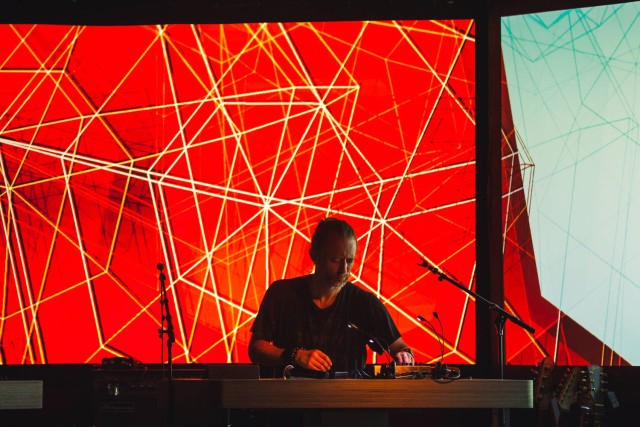 A Winged Victory For The Sullen prove that gigs can be listened to horizontally. The 6music tent on a hot afternoon is an odd place for Dustin O’Halloran, Adam Wiltzie and strings-playing associates, but their music offered a complete change of pace found nowhere else on the bill.

Boomtown Rats attract the curious and their chairs. Of course they play I Don’t Like Mondays, but the rest of the set is bemusement, with Bob Geldof making a great show of tootling away on a harmonica and pulling the audience’s collective leg. Yes, you’re wearing a snakeskin suit, Bob. Good for you, and thanks for reminding us that you’re rich. We’re fine in our shorts and t-shirts though, thanks for asking.

Gwenno accidentally Partridges herself. Introducing a song she says “Revolutions. Quite bloody. But necessary, sometimes”, and you’re transported to a Radio Norwich segue. Still, despite that, Gwenno (formerly one third, then formerly one half of The Pipettes) is one of the best surprises of the whole weekend. In spite of being on The Lake Stage, which doesn’t do anyone any favours with its unfavourable position alongside a thoroughfare, her set of dreamy, synth-laden, Welsh language kraut-pop is marvellous.

Young Fathers take no prisoners. Graham Hastings spends a lot of their first set of the day staring out with a look that suggests that anyone causing any sort of grief is going to get sparked out. It is entirely uncompromising, not entirely keeping with the general feeling of relaxed festival fun. And probably all the better through it. Maybe it’s hip-hop, maybe it’s something more tribal and primeval. But regardless of categorisation, they stand out. And not only for being the only act to play twice. 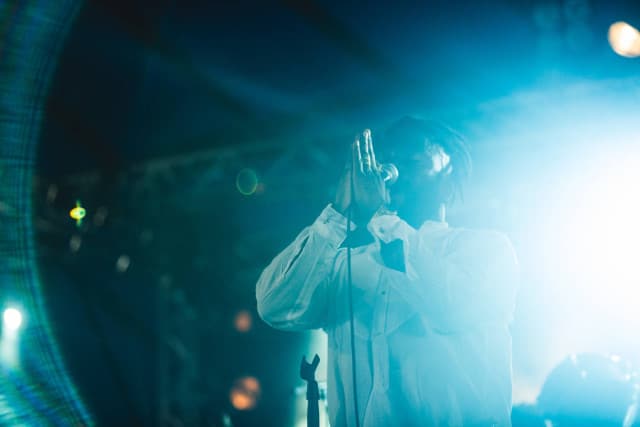 Susanne Sundfør seems quite elfin in her woodland setting. Even if her powerful Scandipop is anything but. It’s the material from her near-perfect most recent album Ten Love Songs – Kamikaze, Fade Away and Delirious amongst them – that translates best; her earlier, more reflective songs by contrast bring her momentum to something of a standstill. But for the most part she’s the poppiest act here, and she goes down a treat.

Warpaint don’t seem quite right. Their dusk set at the Obelisk is a misfire. Although it does pick up towards the end, the beginning is flat, disjointed and slightly bad tempered. The sound isn’t happening, the atmosphere isn’t conducive and the conversation is stilted. A shame, as towards the end Elephants and Disco / Very hint at what could have been. 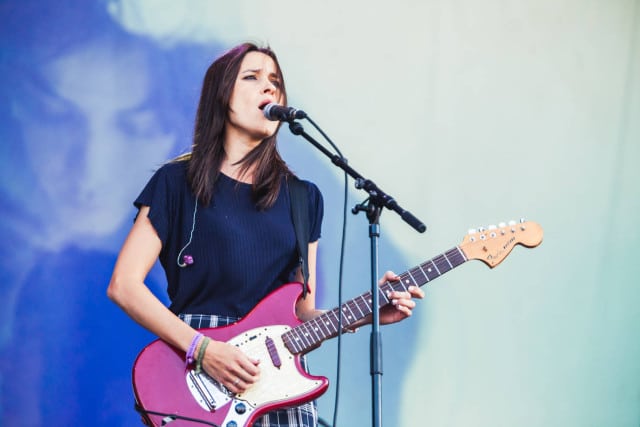 La Roux‘s Ellie Jackson is now a fully formed pop superstar. A survivor of line-up changes, waxing and waning critical interest and intermittent suggestions of ambition, as she stands motionless towards the end of a thumpingly great set while spotlights strobe crosses at her head, there’s the sense she knows it. “This time baby I’ll be bulletproof,” she sings on set closer Bulletproof, and it’s as though her best known song to date has acquired a whole new meaning. 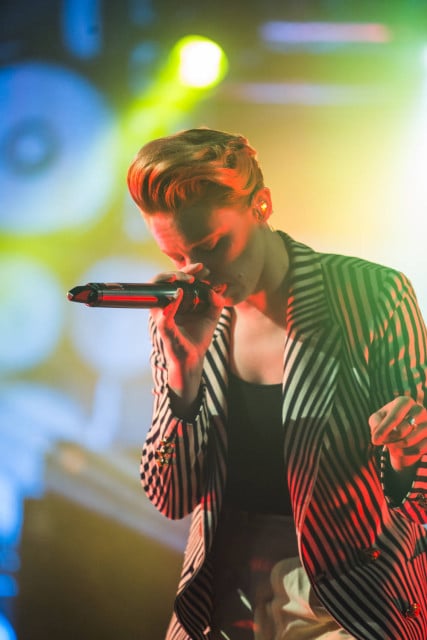 Noel Gallagher can’t stop mentioning The Guardian. On and on he goes. The backstage pass is a copy of the Guardian. The crowd look like a Guardian readers’ rally. If a Guardian reader was to name an Oasis B-side, it’d be called something else. And all this at a festival sponsored by The Independent.

Maybe he’s a massive Owen Jones fan. In between mentioning newspapers, he gives a professional and accomplished turn. The Oasis tracks he rolls out are ably sung back by the crowd, the closing Don’t Look Back In Anger in particular is a unifying moment, and he manages to also lean heavily on his solo material without anyone getting too upset. Like the man said, “just get up there and give it 75%”, which is pretty much what he does. 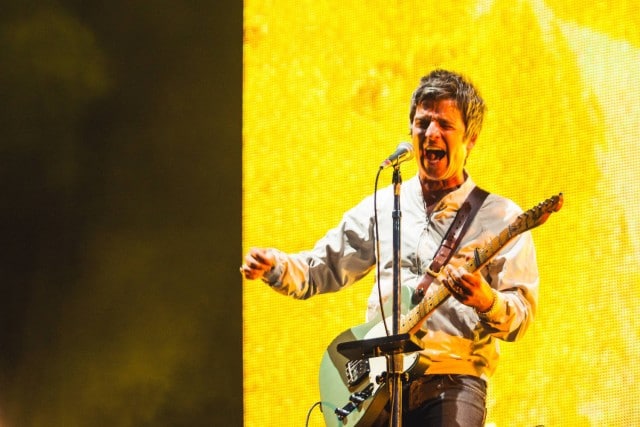 And that, is that. A decade in we may be, but Latitude shows no signs of flagging, demonstrating the necessity of having a strong voice and a strong ethos if you want to stand out. Long may it continue.