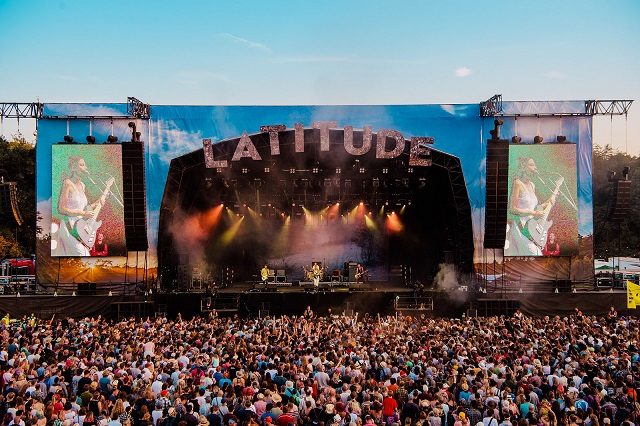 The public image of Latitude probably goes something along the lines of a collision between BBC 6 Music connoisseurship and BBC Radio 4 intellectual comedy, and immediately on Thursday night, the line-up serves to confirm such perceptions. Cambridge footlights figurehead and TV producer John Lloyd combines with QI/Bake Off presenter Sandi Toksvig for an informal ‘In Conversation With’ show, and the hour breezes by with the two regaling a fresh crowd with tales of their years hovering around the fringes showbiz, interspersed with jokes about Max Planck and Niels Bohr, such is the tone of their comedy, and indeed of much of this festival. A full QI live show follows the next morning and it draws one of the biggest crowds of the weekend.

At the other end of the spectrum on Thursday night, an unadvertised DJ set from Idris Elba is the news on the lips of those in the know. Young and hopeful revellers flock to the Sunrise Arena to break themselves into the weekend, duly jumping around to House of Pain and holding their lager aloft to Underworld. The tracks are big ones, but the crowd is being filmed for Elba’s forthcoming TV show so the reactions are as animated as could have been desired. There is no rush quite as fulsome as that first big hit of the weekend and Elba delivers that in spades.

The first chest-thudding attack of guitar aggression on Friday comes from LA’s Deap Vally, the two piece elemental blues rock band that have no time for your average group’s frills and decorations. The BBC Music Stage is amped up to its eyeballs and Lindsey Troy’s guitar and Julie Edwards’ drums are quite enough to blister your eardrums on their own, thank you very much. It’s the last day of their tour so they’re double cranked even by their towering standards, with Grunge Bond and new one Get Gone flying highest of all. 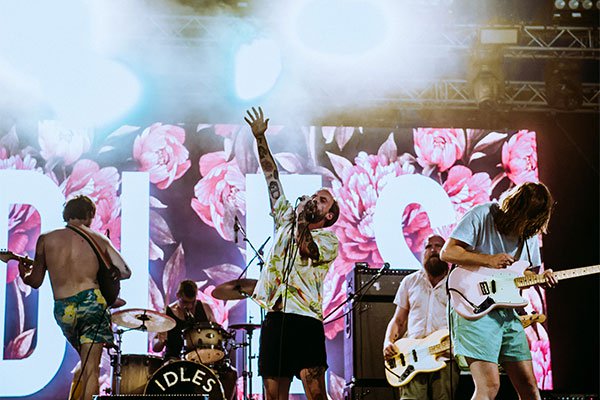 The US guitar vibes continue with the buzzy Bodega. They are hot off the angry indie rock presses, infused with the same spirit that has seen Parquet Courts and Car Seat Headrest filling recommendation lists for the last number of years. They are spiky, have a drum kit essentially split into two parts with two members each taking one part. They use hipster musical history as their playground – Can’s Vitamin C is referenced at one point, whilst they have a Heaven Knows I’m Miserable Now joke that we won’t ruin here but is genuinely hilarious. They have the unlikeliest underground singalong hit of 2018 too in Jack In Titanic, and they are without question one of the most must-see bands of the moment. They send a Lake Stage crowd skipping away.

The Film and Music Stage plays host next to LUMP, the new collaborative project between Laura Marling and Tunng’s Mike Lindsay. Their self-titled album is only six tracks long, but we get them all, in order, and no more. There is a patience to LUMP’s music, a studied attention to detail, free from the confines of reaching a chorus within the first 90 seconds or so. Their songs take their time to emerge, like Omar Sharif out of a mirage, but blossom into warm, irregular and intricately decorated things. Marling enters a new animal state when playing with this band, channelling a sultry rockstar cool, swapping between bass and guitar. The crowd seems hesitant at first, perhaps expecting some Marling solo material, but this is intoxicating stuff, a heavyweight set that marries Marling’s recent fascination with Ivor Cutler and Edward Lear with Lindsay’s experimental tendencies. If you haven’t spent time with the LUMP album yet, do yourself a favour.

The great joy of Latitude is that you can alternate between music and spoken word performances at your will. In advance of tonight’s Solange headline set, a short diversion to the SpeakEasy Tent finds a stimulating conversation between Robin Ince and a phalanx of scientists and big thinkers ruminating on the future and whether we are indeed fucked or not. On the day of Trump’s visit to the UK, it is heartening proof that discerning, rational, inquisitive minds can still draw a crowd. Intelligence may be on the ropes, but it’s not beaten yet. 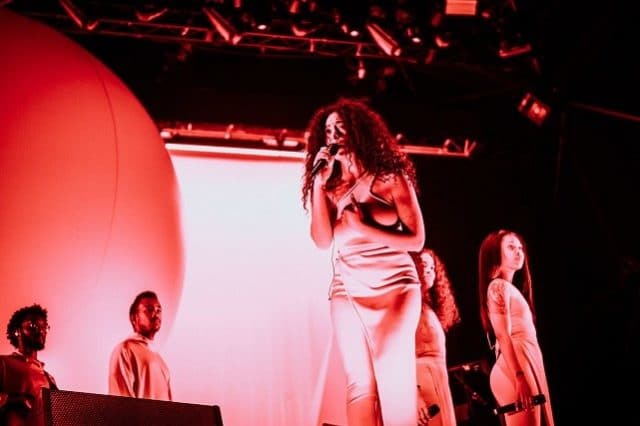 Solange is a bolt from the future, or so it seems after The Charlatans and Belle & Sebastian before her. The latter two both put in rousing, nostalgia-packed, energetic sets that are rounded off by standing ovations, but on arrival, it’s clear that our headliner has been beamed in from a different timeline. Sleek, fleek and cloaked in midnight neon light, Solange and shadow dance troupe – up to seven of them – are sub bass frequency seductive. Big tunes are unneeded, the mood is king, or queen. The audience has filtered and the millennials for the first time this weekend are running the show. The connection between stage and crowd is undeniable long before she comes down to make literal contact during ‘F.U.B.U.’, but for the giddy shrieks all around alone it’s worth it. For a festival that has recently been headlined by Mumford & Sons and The 1975, this is some forward stride. Single of the decade contender Losing You rudely interrupts the slow jams, whilst Don’t Touch My Hair is saved for the encore. It isn’t the most hit-packed set of the weekend, or the biggest crowd, but it is the most future-facing.

“We’re Parquet Courts from New York. Stand the fuck up.” Those are the words that jolt a Saturday afternoon audience out of their slumber in front of the main stage. The band are, it must be said, somewhat out of place there, and one can’t help but think that they would have better fit in on the BBC Stage. Their shouted lyrics of free market hypocrisy were, I’m wagering, lost on this crowd. They intro Master Of My Craft by dedicating it to Noel Gallagher, “everyone’s favourite member of Oasis”. They obviously know the news that most in the crowd don’t yet, that the much vaunted secret set is less than an hour away and it will be performed by the junior Gallagher brother. 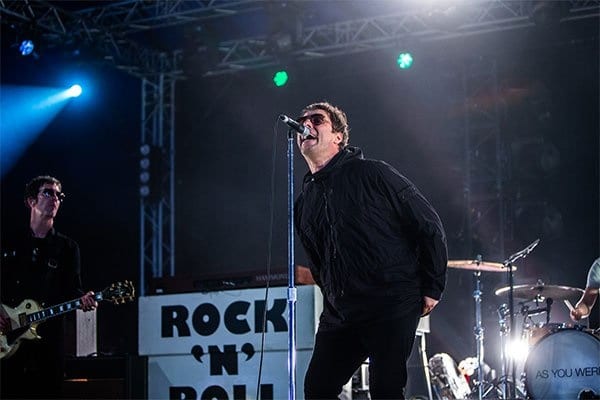 The festival organisers had dropped the word “iconic” to describe the secret performer’s identity, whetting appetites, but confirmation had been nowhere to be found. Ed Sheeran’s name was inevitably amongst the murmurs, living as locally as he does, but the cat had more or less been let out of the bag at the last minute by Liam Gallagher himself, when he tweeted a Welcome to Suffolk photo. “Surprise surprise! Rock n Roll Star” he shouts down the mic and immediately they launch into the Oasis classic. The release of energy is inebriating. Swiftly consolidating the quick start with Morning Glory, the set is already a winner. Of course, we get plenty of new tracks, all doled out in the first half hour, and it’s impressive how well established Wall Of Glass and For What It’s Worth have already become. The second half is wall to wall classics, all taken from 1994 and 1995, all throat-shreddingly reflected back at the stage from this emotional crowd. Live Forever still carries an extra level of poignancy even a year after the Manchester attacks and it finishes the set on a tidal wave of goodwill.

The Killers frontman Brandon Flowers had from his first spotty appearance a decade and a half ago all the hallmarks of a slick main-stage-commandeering besequinned showman. He has the mass communication powers and the dead-eyed absence of threat that has made his rise to travelling headline frontman inevitable. He leaves the impression that no one has enjoyed his showmanship quite as much as he has, the Bruce Forsyth of modern rock. Frequently, when playing anything from the last ten years, to mostly blank expressions and unsung singalongs, he teeters on the edge of off-Broadway self-indulgence, cheerfully oblivious of how this all comes across. The hits come thin and slow, but provide the exact echoes of nostalgia that we thought we wanted an hour ago. The crowd, easily twice as big as any other this weekend, is willing, and yet outside of the hardcore frontmost few, they appear surprised not to know more of such a popular band’s music. The most surreal moment sees Liam Gallagher stride on stage, Flowers obsequiously bowing before him. Gallagher explains that he doesn’t know the words to any Killers songs, as if that needed clearing up, and proclaims his intentions to consume some beverages and duly leaves again. A bizarre interception, but it causes cheer.  A cover of Oasis b-side Acquiesce follows, but this crowd appears not to recognise it. Nevertheless, the people came for a good time and The Killers deliver when it’s needed. They save a gauntlet run of their biggest hitters for the set’s climax.

Like Bodega and Parquet Courts before them, Idles seem a strange fit for such a genial festival. How do you marry what Latitude absolutely is – a full weekend surrounded by the friendliest, most well-meaning, bring-your-family sector of society – to what happens when you walk into a tent that is playing host to Idles? Well, you lose your shit, evidently. Beers fly like it’s a World Cup fan park and frontman Joe Talbot is loving it. A young man named Ollie manages to get on stage and is allowed to play a guitar solo too, but a lot of the crowd won’t have noticed, all too busy pogoing and shoving their fellow Latituders back into the fray.

A fraction of the same energy is brought to the main stage by Wolf Alice as Sunday nears its climax. “THIS IS A SONG ABOUT MAKING FRIENDS. I LOVE YOU GARETH SOUTHGATE” goes one intro, a song suffixed by the most tragic one-man rendition of Three Lions you’ll ever hear. It’s truly been a long, confusing summer. Unlike The Killers, they strike the right balance between rock n roll menace and main stage accessibility, and even if arms and legs are beginning to cry with lactic acid, the songs easily win through. You’re A Germ and Yuk Foo in particular fly out of the speakers. 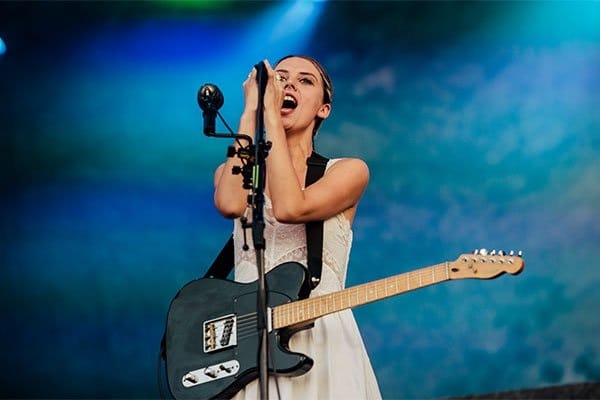 The final set on the main stage is from Alt-J. Their set up, now well established, is still curious. The band is divided up by neon railings, only fuelling some people’s suspicions that this is a technical, mathematical, empirical band that let no sound wave emit that has not been forensically tested. There is a satisfaction to this, by the way, especially when you see it working in a festival headliner environment – it may be clinical but everything has been perfected. The spontaneity of Wolf Alice is some way off, lord knows how the alt-J members would react to a glitch in the system, but mercifully we’re not faced with such an obstacle, as the Leeds lads treat us to the full range of their career. It is a warmly embraced set that summarises what makes Latitude a special place – all negativity is checked in at the entrance gates. In an over-crowded market, there will always be a place for such a friendly entry in the UK music calendar.

More on Solange
Solange – When I Get Home
Festival Review: Latitude 2018
Solange – A Seat At The Table
Solange @ XOYO, London