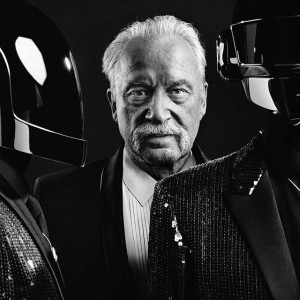 Curated by Bestival founder and Radio 1 DJ Rob Da Bank and artist manager and Association for Electronic Music originator Ben Turner, LEAF 2013 benefited from an extensive black book of contacts, from cutting edge breaking acts to bona fide legends of electronic music – and all up close, personal and chatty. That it was the first attempt at this event perhaps accounts for it being surprisingly underplayed in advance; the artists involved, and LEAF’s innovative set-up, certainly merited publicity.

A two-day Hub programme at Circus Space concentrated on installations (one from Dinos Chapman), masterclasses (how to manipulate a sine wave from Mute boss Daniel Miller), film scores (Moroder’s sountrack for Metropolis and Rob Da Bank’s rescoring of King Kong) and keynote interviews covering a wealth of electronic music living history, while DJ sets played out at both the Hub and at the Oval Space, a new(ish) venue down the road in Bethnal Green with an evocatively industrial view of gasometers. A live show apiece was allocated to the Brixton Academy (Major Lazer), the Forum (Trentemøller), Village Underground (The Bloody Beetroots) and new venue the Laundry (Omar Souleyman), a disused commercial laundry with the concrete feel of a car park and surprisingly decent sound.

The undoubted star of LEAF 2013 was a 73-year-old who has only recently taken up DJing. The man behind Donna Summer’s I Feel Love, innumerable film soundtracks – The Never Ending Story, Midnight Express – and Freddie Mercury’s Love Kills, to scratch merely at the surface, went above and beyond. Beginning with a keynote interview – following a similar set-up for New Order earlier in the day – he progressed through a Q&A, introduced his restored version of Fritz Lang’s politically pertinent silent movie Metropolis and then headed over to essentially DJ his career in a late night headline spot at Oval Space. Happily posing for pictures with fans and signing everything from t-shirts to posters, Moroder gave the impression of a man mildly surprised that so many people not only knew who he was but wanted to get to know him better. His DJing was not perfect, but nobody expected it to be. His choice of music won through; everyone wanted to hear his hits, and he could but oblige.

On stage right in front of us, with no barriers, were the creators of the Doctor Who theme, replete with giant tape reels, ancient synthesisers and enough kit to fill several studios, playing a career-spanning set early on Saturday afternoon, punctuated with stories about begging, borrowing and stealing equipment, rehearsal space and budgets down the years. The gentlemen of the BBC Radiophonic Workshop gave off an air of an enthusiasts’ club; their music is world famous, but they were only too happy to chat at the public bar afterwards. As with Moroder the day before, they contributed to the sense of this festival allowing unique public access to bona fide legends, none of whom seemed to see themselves as such.

A familiar name if not a familiar face, William Orbit is best known as a producer of other people’s music, having been at the controls for Blur‘s 13 and Madonna‘s Ray Of Light, amongst much else. His Pieces In A Modern Style album was a surprisingly big hit in the early noughties, but as an artist he seems far more comfortable in the studio than on the stage, if tonight’s appearance – part stream of consciousness, part Q&A, part mad professor at work – was anything to go by. Strumming a guitar, he took questions on Madge’s Ray Of Light sessions, offered up stories of squatting in a school, accidentally (?) revealed his performance notes on the big screen behind him, showed off some film of steam trains and fired up a computer controlled percussion robot. There was a fine line between madness and genius at work amidst the laugh-out-loud chaos that ensued, and by the show’s end we were none the wiser which side Orbit falls on. Outside having a cigarette, he was happy to talk further to fans who lined up for the chance to meet a unique English eccentric. When he takes this show on the road in 2014, go.

At new venue The Laundry, the unique music offering that is Syrian techno exponent Omar Souleyman had dispensed with the poetry readers of his earlier appearances and now forms a pair only with longtime keyboardist Rizan Sa’id, whose battered, scratched old Korg’s top A sticks up, demonstrably not renewed by money from a recent Domino album deal. The now familiar moves with the hands, and clapping, are present and correct, as are the shades. New songs are almost unrecognisable from their Wenu Wenu recordings with Four Tet; they last longer, for one. As he left the stage (more of a step) without encore, his audience – a mix of hardcore devotees and bemused beardstrokers – were left to reflect on Souleyman’s occupation of a pinhead, between niche and mainstream, and dancing to his own tunes atop it.

Harrumphy on Facebook about being genre pigeonholed, Anders Trentemøller was one of two opening night gigs – the other being The Bloody Beetroots – that took LEAF’s clientele out beyond Circus Space, in this case all the way to Kentish Town. As part of an electronic festival, a set predicated on post rock was a surprise, though not an unpleasant one, and there were enough reminders of his electronic roots to suggest his music is forward looking enough to transcend mere genres. Moving lights decked out with paper rose and fell, looking for all the world like flying saucers, and a friendly audience lapped it all up.

There was so much that was positive about LEAF 2013, but it could be better yet. It needs tighter geographical focus next year to make it feel like a cohesive event – losing the Forum and Brixton Academy would be no bad thing – and the Hub needs work on its atmosphere during the days, when rooms with DJs of the quality of Daniel Miller were scantly attended, partly due to the wealth of spoils coexisting.

Also odd was the Sunday night end, with no Sunday daytime programme, which rather left Beardyman and Omar Souleyman out on limbs. Tightening up to a two day, three night event, and using the same venues throughout more consistently, would make sense.

But it’s almost churlish to pick fault with a unique event whose ambition and vision, as well as the sterling roster of artists its inaugural outing attracted, bode very well indeed. Should the festival return in 2014, already there can be no doubt as to the quality of bookings we should expect. Just one problem for the organisers: What and who could top it in 2014?