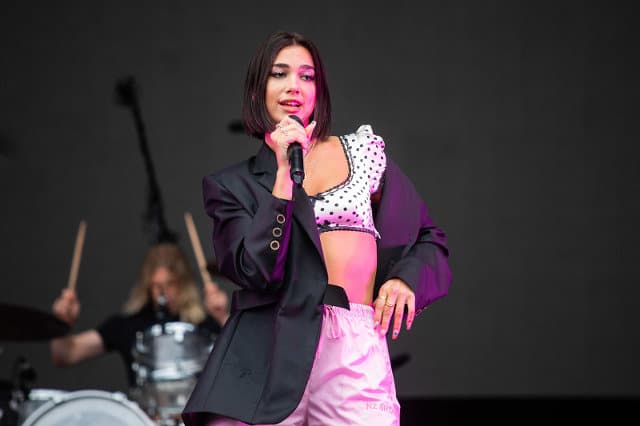 Debate has raged ever since the first wave of acts for the 2018 Reading and Leeds Festival were announced earlier this year. Some labelled the line-up the “worst ever” and many bemoaned the absence of Arctic Monkeys in a year when they released a new record. Others were less than impressed with the festival’s further retreat from its rock and metal origins.

Such was the furore around the big reveal, Festival Republic boss Melvin Benn was forced to come out in its defence. “You can’t keep drumming up the same acts and expect people to continue to come and see them,” he said. But while his point was certainly a valid one, there was no getting away from the fact that, in the context of a Glastonbury fallow year, the signature bright yellow poster felt somewhat underwhelming on first inspection.

His argument about trying to avoid recycling the same acts was also undermined by Fall Out Boy headlining again just two years after they last did so – with much aplomb, it must be said – alongside Biffy Clyro. Yet, ultimately, this year’s line-up only continued in the direction the festival has been heading in for the past few years, reflecting current tastes and appealing more to the younger Radio 1, just-passed-our-GCSEs crowd. 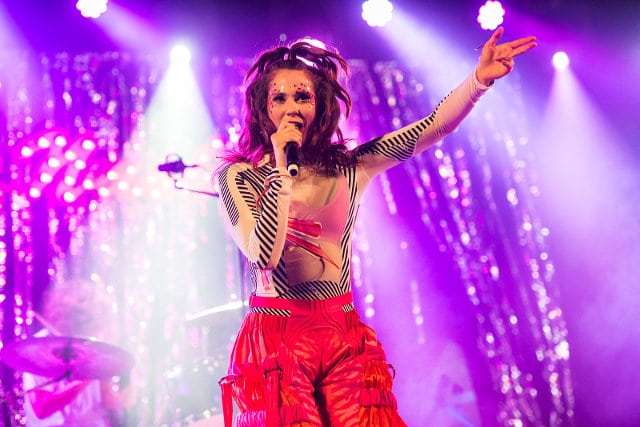 And this is no more apparent than in the decision to give a prime slot on the Main Stage on Sunday to British pop megastar Dua Lipa. Instead of being bottled off – as she perhaps* (*almost definitely) would have been in the past – the 23-year-old pulls one of the biggest crowds of the Bank Holiday Weekend. She brings the hits as well during a show-stopping set, reeling off One Kiss, Hotter Than Hell and New Rules to screams of adulation.

Not even the rain can put a dampener on her performance, which she commands with impressive authority throughout while supported by choreographed backing dancers, with the reaction more than justifying her inclusion on the bill. She is not the only pop act to thrive at Bramham Park either, with BBC Sound of 2018 winner Sigrid underlining her popularity with a cathartic set that includes a huge sing-along to Strangers.

Her reception pales in comparison to that for Post Malone, though, who owns his slot on the Main Stage at a similar time to that of Dua Lipa’s on Saturday. It’s absolutely heaving as the Texas rapper delivers his genre-shifting, angst-ridden tracks with a confidence that, at times, verges on bravado. Despite this, he has the crowd eating out of the palm of his hand as Better Now, Rockstar and Congratulations provoke fervent responses. 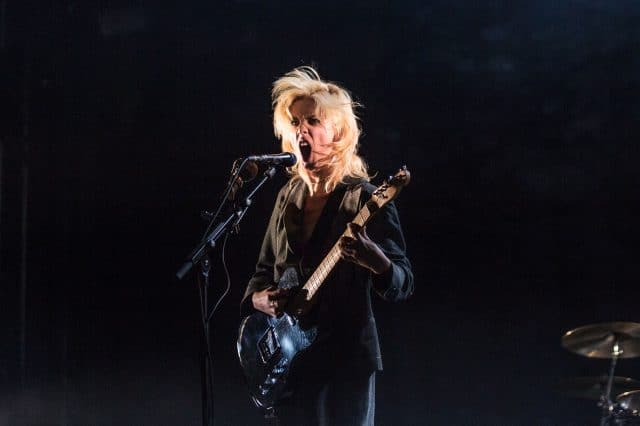 For all the focus on the new and changing face of the festival, however, rock remains the beating heart of Reading and Leeds and brings one of the highlights of the weekend in the form of Wolf Alice’s headline slot on the Radio 1 Stage on Saturday. With Ellie Rowsell’s remarkably versatile vocal leading the way, the London four-piece step it up a gear after their barnstorming half-hour secret set stole the show last year.

Having since had time to digest the brilliance of their second album, Visions Of A Life, those in attendance revel in the abrasive, in-your-face attitude of Yuk Foo; before being sucked in by the seductive Don’t Delete The Kisses and delighting in Beautifully Unconventional’s infectious chorus. Old favourites such as Bros and Silk are also enthusiastically embraced, while the colossal Giant Peach closes the set in style and leaves everyone wanting more.

Guitars are also front and central on the Main Stage on Friday night as The Vaccines deliver their latest audition to be future headliners. Four albums in, they continue to go from strength to strength and the likes of Your Love Is My Favourite Band and I Can’t Quit from latest LP Combat Sports are as well received as classics such as Wetsuit, Norgaard and Teenage Icon. It seems only a matter of time before they top the bill. 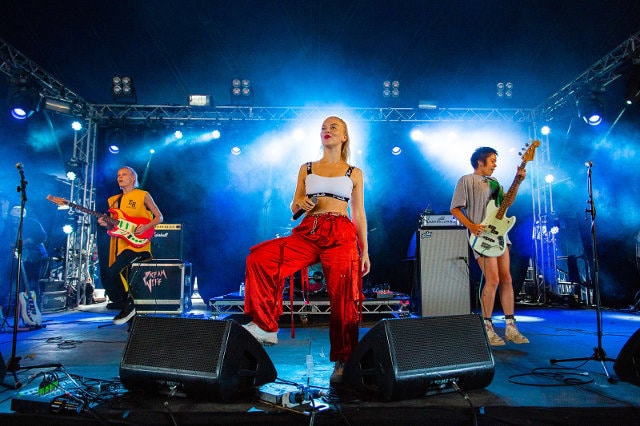 There was a time when The Courteeners appeared to be on that very same trajectory, but while it never quite happened for Liam Fray and Co, Not Nineteen Forever and Cavorting remain essential festival anthems. The same goes for The Kooks, another band that dominated the charts and line-ups in the early 2000s. Nostalgia is out in full force as Ooh La, She Moves in Her Own Way and Seaside prompt joyous sing-a-longs.

Luke Pritchard has never been the most engaging frontman and his cheeky dig at the festival’s diversity, unsurprisingly, falls flat. “It is quite an honour to be one of the last bands here with one of these,” he says, holding aloft his guitar. That said, set closer Naive provides a reminder of the power of a perfect festival anthem as thousands drown out Pritchard on the irresistible chorus of the track that launched their career.

The resurgence of The Wombats, who precede The Kooks on the Main Stage, also warns against writing off supposed indie has-beens, at least when it comes to Reading and Leeds bills. There was a time when the trio appeared destined for the landfill alongside many of their mid-noughties contemporaries, but recently released fourth album Beautiful People Will Ruin Your Life has seen them find a new audience and Lemon To A Knife Fight feels like a proper festival moment. 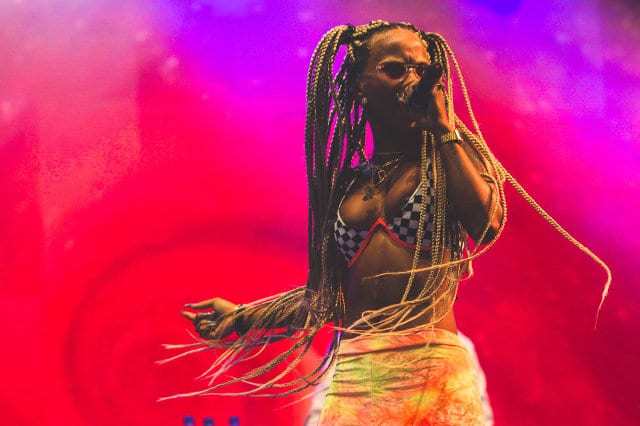 Friday night headliners Kings Of Leon are also well-versed in the peaks and troughs of being in a rock band. Almost a decade has passed since they last topped the bill at the twin festivals – when the Nashville four-piece hit out at the Reading crowd for the cold reception they received as many only seemed interested in hearing Sex On Fire and Use Somebody on the back of Only By The Night, which had made them household names.

Caleb Followill later apologised for the performance and his attitude, admitting it took time to come to terms with their newfound success. Thankfully, 2018 finds the band in a much better place and their career-spanning set weaves in the old and new with masterful ease. They have fun with fan favourites Taper Jean Girl, Molly’s Chambers and Charmer, while the prominent placing of their mainstream crowd-pleasers feels almost redemptive.

It is an accomplished performance from start to finish, something that, sadly, cannot be said of Kendrick Lamar’s festival closing set. Like N.E.R.D earlier in the day, the five-time Grammy winner has his work cut out for him in truly miserable Yorkshire weather. But having demonstrated his genius three years ago supporting The Libertines on the same stage, the Compton rapper looked on paper like an ideal candidate to lift the mood. 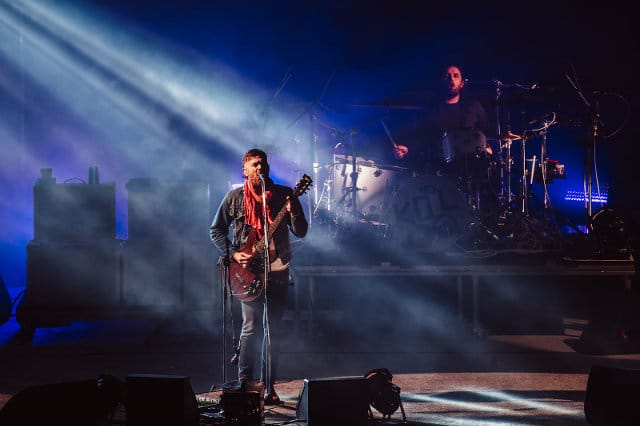 His late arrival does not get things off to a good start, though, and while King Kunta, Backseat Freestyle and Swimming Pools (Drank) quickly warm up the crowd, Lamar’s performance feels lacklustre. Minimal crowd interaction and trippy Kung Fu movie clips in between songs don’t help matters, but the shortest headline set of the weekend does finish with a welcome bang in the form of HUMBLE and Bitch, Don’t Kill My Vibe.

Nevertheless, even taking the blistering climax into account, there is something unsatisfactory about the overall set. Whereas his last appearance at Bramham Park was essential viewing – a landmark moment for the festival – his return feels inconsequential. In fact, in many ways, it provides a suitable analogy for the festival itself this year. It wasn’t bad by any means, but it’s just been done better previously.