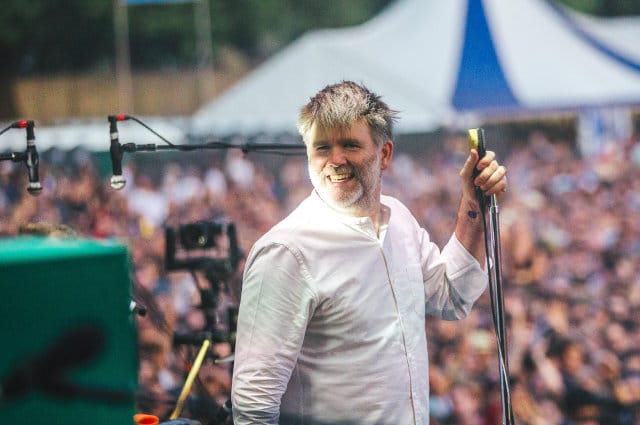 Once upon a time, Groove Armada’s brainchild Lovebox was a three-dayer, with an urban day (Friday), an indie(ish) day (Saturday) and a gay day (Sunday). The latter has departed entirely, this year replaced by the new Citadel festival. And while Friday still focuses on sounds deemed urban, it mixes in plenty of party dancing too, despite the British summer’s best attempts at replicating a windy Wednesday in March.

With a crowd already hyped up by sets from Toddla T and Riton, Diplo can be found at the outdoor West Stage in the late afternoon, playing the sort of hyperactive, sonic spectrum-encompassing music some might describe as ‘sick’. He has nice things to say about his compliant London audience, and he does so by means of reincarnating Whitney Houston amongst us to sing I Will Always Love You before mashing her up amidst wub-wub bass and screechy about-turns while one lady in the audience gently gyrates in a hula. Giggs plays the same stage later, breaking down a selection of old skool tunes during a rare glimpse of sunshine and amid a fug of burning plants. 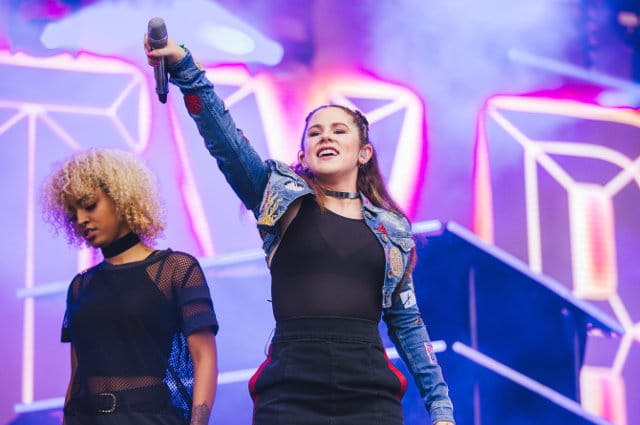 The tiny Fabric Live tent is already one-in-one-out by this point, having played host to Preditah and Big Narstie in the early afternoon. Headliner Kano sees a thronging queue five deep around the tent later on, which might account for an unexpectedly sparse crowd for the politically charged lines from El-P and Killer Mike, aka Run The Jewels, on the main stage. They commiserate about US and UK politics and press the sort of obvious buttons guaranteed to please leftwingers everywhere, call politicians names and placing Lie, Cheat Steal front and centre in a set that makes up for in passion, thought and a sense of connectedness what it lacks in party vibes.

Diplo’s international mobile party outfit Major Lazer headline the main stage, and various of his collaborators play before him, not least Denmark’s MØ and Peckham’s Katy B. The latter of these, given the sheer number of first-rate bangers in her collection already, should surely be headlining festivals by now, even if the BRIT School alumnus’s show would do well to extended its scope beyond what amounts to a PA with four backing dancers, a DJ in a booth and some smoke cannons. What she does perform, in what feels like a very short set lasting just over half an hour, ranges from thoughtfully interpretive remixes calling out her influences to her bigger tunes, not least her recent first UK Number 1, Turn The Music Louder (Rumble) and the concluding Katy On A Mission, the song that launched her. The crowd, just starting to get into the set, goes rather wild, but all too quickly it’s over. 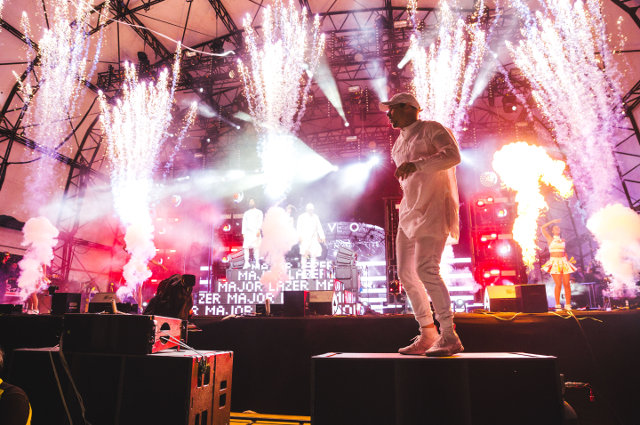 Major Lazer have changed much since their inception as an outlet for Diplo and Switch to ramp up their shows. Switch left fully five years ago, with Jillionaire and Walshy Fire taking prominence these days. The lighting is as colourful as the music, and while gone are the days of poledancing robots, the set is straightforwardly about having a party, with scant regard for subtlety, variety or nuance. Diplo certainly seems to be enjoying his creation, bouncing about all over the stage. It’s less clear who if anyone is playing anything, but with this act such trifles as performance skill was never really the point.

Mercifully, the sun burned away the clouds on the second day of Lovebox. Summer was at last in London, and the atmosphere was transformed. South Londoners Formation kicked up some dust on the West Stage, with a soulful, synthy take on punk-funk. Based around the duo of twin brothers Will and Matt Ritson on vocals and keys respectively, this relatively new band’s live sound is beefed up by driving, fuzzy bass. Before Back Then, taken from 2015 EP Young Ones, Will tells us we’re going to play World Peace, adding that the rules are “you’ve just got to be nice to each other”. It’s hard to argue with that. 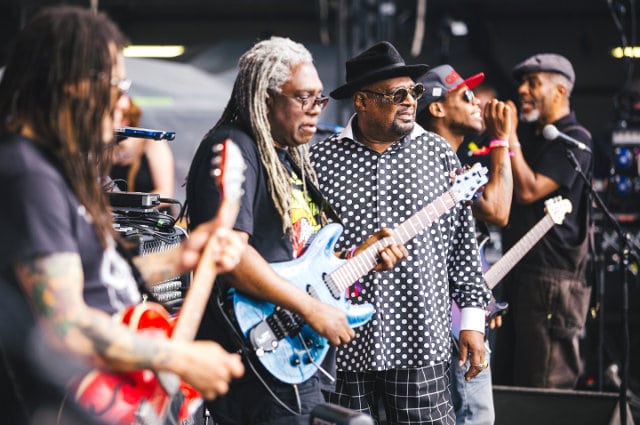 It might have seemed improbable at one point to think George Clinton would outlive superfan Prince – who inducted Clinton into the Rock and Roll Hall of Fame almost 20 years ago – but, at 74, he’s here with Mothership Reconnection, made up of some members of the latest line-up of Parliament-Funkadelic, along with myriad backing singers, guitarists and rappers.

It’s a huge band, and, although the mothership is never in danger of stalling, given the energy levels onstage, it really soars around the halfway mark, when the classic One Nation Under A Groove and Flashlight are aired. By the time they close with Atomic Dog, the crowd are one refrain of “bow-wow-wow-yippie-yo-yippie-yeah” away from climbing aboard the mothership for good.

Meanwhile, in the Big Top, Kiasmos – Janus Rasmussen and Ólafur Arnalds – brought minimalism and techno together at a time surely some 12 hours earlier than their ideal. Their set would, at this juncture, be invigorated by new material and some more bona fide bangers – their single album was surely only a foretaste of what these craftsmen will achieve. Nonetheless it goes down well, the crowd hooting for more long before it’s over. They’re followed by Erased Tapes label mates Rival Consoles. 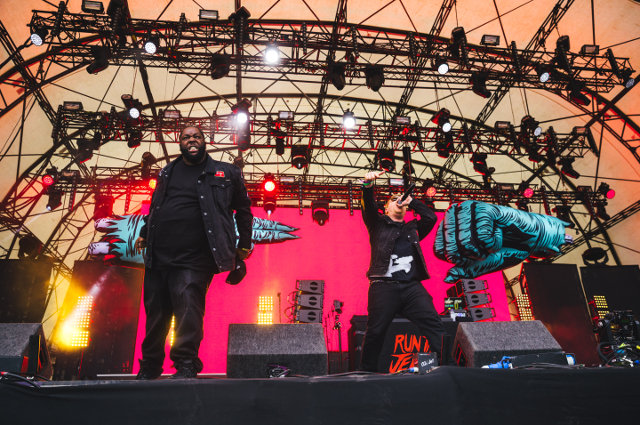 Miike Snow’s Andrew Wyatt, dressed in black, seemed to hail from the Dave Gahan/Michael Hutchence school of deep and meaningful frontmen, but the Scandinavian pop that’s the trio’s mainstay was so much light entertainment on a sunny afternoon. Their profile in the UK remains strangely low for a band not only signed to a major label, but one whose members are responsible for smash hits like Britney Spears’ Toxic. They surely found new fans today.

Back at the West Stage, there’s a set by Seattle duo Odesza, chopping and splicing an eclectic set of chillwave as the evening starts to draw in, their lights bathing the beatific crowd in a warm glow. Keep Her Close, swathed in harmonies lifted from the Beach Boys’ Our Prayer, is a highlight.

Sadly, we’re met with disappointment at the Fabric tent, with the news that headliner Ricardo Villalobos has been forced to cancel his slot due to a severe illness. But after a short dash, there’s just time to catch some of the main stage set by Jungle. Taken from their 2014 – and to date only – album, Busy Earnin’ is bold and brassy, with Time an equally impressive closer. If they can take this scaled-up live sound back into the studio, there’s every reason to believe album number two could be even more impressive than their debut.

LCD Soundsystem were undoubtedly the main reason most of the audience journeyed to Victoria Park. Five years after calling time on the band’s three-album career with a huge show at Madison Square Garden and the film of the break-up, Shut Up And Play The Hits, they were back, and to a markedly ecstatic reception – one that’s surely now got over the fact that bands breaking up can also get back together. Ostensibly, little has changed in the intervening years; James Murphy’s dragged-out-of-bed hairstyle and white shirt are present and correct, and Nancy Whang is again the keyboard lieutenant to Murphy’s none-more-unlikely front man.

They do of course shut up and play the ‘hits’, most of which are famously well over six minutes in length even when speeded up for a live occasion. The euphoria of All My Friends and Yeah on record is palpable; live it’s in another league, and a perfect sound set-up underscores what fantastically well arranged pieces these are, with every note placed creating a visceral reaction, recalling memories of other fields and younger faces. With a new album reputedly in the offing, they’re not quite ready to play the heritage circuit, and their songs were always about more than the sum of their parts. There’s a point when in All My Friends Murphy sings, “Where are your friends tonight?” and perfect strangers grin at each other and embrace as dusk gives way to darkness. The unifying power of music, demonstrated by a one-off band who should never ever go away, it’s the perfect send-off to the weekend.