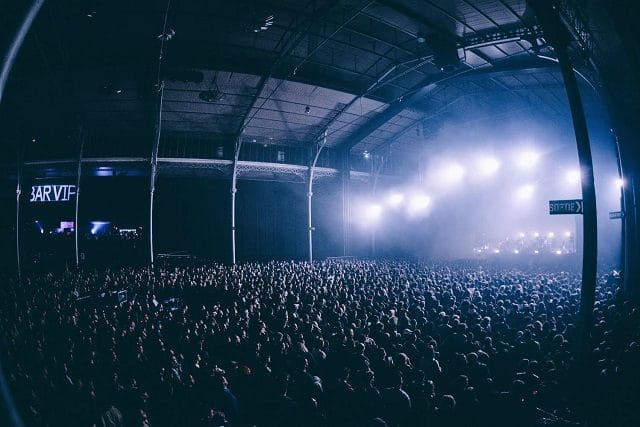 Europe brims with festivals. From the inner city showcases to the forest clearing campsites, the calendar floweth over with options for the music junkie with a few pennies to spend. As the 2018 season well and truly draws to a close, one of the most desirable locations the continent has to offer provides one last injection of adrenaline before the last few revellers nestle in for their hibernation.

Pitchfork Paris has been a coveted destination since its 2010 inception, an excuse if nothing else to travel to the City of Lights and its beautiful 19th arrondissement. The three early November nights that play host to the 2018 edition are bracingly crisp but dry and glistening with the freshness of the new season. The Grande Halle de la Villette is the venue, an imperious 19th century cast iron former abattoir that houses two stages at its opposite ends, a theatre that plays host to a bubbling mix of domestic and international talent.

Yellow Days light the touch paper on Thursday. Their stoned, warm, bass-heavy AOR funk is the ideal aperitif, a hot toddy to cosy the crowd up to the night ahead. George Van Den Broek’s project might call to mind Lionlimb or Ariel Pink, but Yellow Days are not lo-fi, especially when he launches into searing, high and true guitar solos. As the crowd shuffles down to the other stage at Yellow Days’ conclusion, there is a newfound glow in the air, and it’s needed for the arrival of John Maus.

What follows is an irrepressibly energetic and challenging set that tests the experimental tendencies of the Paris audience, a test they pass with flying colours. Maus frequently adopts a centre stage pose, his body bending in half at the oddness of the improv-electronica that he is hearing, embodying a sort of cult-like figure somewhere between the Pied Piper and Tony Clifton. It is a disarmingly strange set, each new moment a surprise. This is engaging, subversive performance art and Paris laps it up. As one bystander notes as he bellows into the ear of his friend, “HE SOUNDS SO CLEVER!” Everyone enjoys a rousing closing number, and Maus doesn’t disappoint, finishing with a chorus of “your pets are gonna die”. It’s all about the common touch.

Etienne Daho provides one of the most talked-about sets of the day, the 1980s French new wave star still clearly adored in his home country. The music is fresh and smooth, avoiding some of the most common traps of legacy acts that continue to tour. Daho’s band are in tune with the psych nuances that have developed over the last thirty years and they carry off the changes with aplomb – international audiences can liken him perhaps to an Adam Ant or Gary Numan figure. Their version of Pink Floyd’s Arnold Layne is a highlight.

Headlining the opening night is Mac DeMarco, his disreputable antics now somewhat curtailed since his transition into bona fide festival headliner. He is still an anarchic figure on stage, eager to find an excuse to cause a little mayhem when it comes calling, but tonight is a relatively straight performance. He does exude a different tier of confidence to the others on the bill, an outsider that doesn’t blink at the sight of a headline crowd. He is impressively unfazed by all this success, he just wants to do what he likes to do and let his secretly brilliant melodies bleed into whoever’s ears happen to be passing. His songs, especially those from the mighty Salad Days record, are gleefully, voluminously sung back to him, and by the time the curtain falls he finds himself sitting in a topless heap in a chair, pulling shapes that you wouldn’t accept from an uncle at a wedding. Only Mac can get away with it. 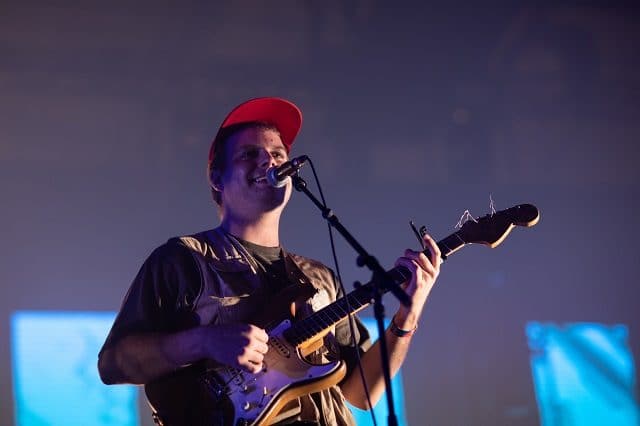 Friday explodes into life with the big, bold, brightly coloured punk pop of Dream Wife, a system reboot for the slightly bleary faces that might have taken opening night into the morning hours. The London band’s chunky chord riffs and shouty vocals are equally confrontational and enchanting. Frontwoman Rakel Mjoll stalks the stage, somewhere between a dance and a march. They are angry and they’re determined to have fun about it. As they introduce their anthemic Somebody, Mjoll asserts, “This song is one big fuck you to gender norms. Gender is a construct, so can we please tear it apart!” Judging by the gleeful faces of the audience as they leave, gender is in serious trouble.

The French acts steal most of the day on Friday. The 20-year-old Lewis OfMan is a savant, an electronic producer so well versed in musical history that nothing escapes his tinkering. There is a whole forest of sonic textures and frequencies in his set, at times invoking 70s Italian horror film soundtracks, at others embracing a maximalist, Avalanches-like organic house fever. Everything in his set is handcrafted and beautifully decorated, unlike the industrial forces that bind together Bagarre, who play later in the day. Sitting somewhere between post-punk and hip-hop, their intoxicating, bracing mix hits the crowd in primal, direct attacks of bursting energy and adoration. The spirit of M.I.A. and Beastie Boys is with them, a pulverising hybrid of acoustic and processed sounds punctuated by impactful vocal stabs. It is a memorable set from an act that might have a big future.

The biggest, most visible crowd reactions of the whole festival come during Car Seat Headrest’s incendiary set. As frontman Will Toledo tells us early on, they play mostly songs from Twin Fantasy (Face to Face), their recently re-released album, and whilst those songs are enthusiastically received, that is nothing compared to the rapture that outings from Teens of Denial cuts get. It all revolves around a towering performance of Drunk Drivers/Killer Whales, a pyrotechnically spectacular spiritual high for those acquainted with the song, which appears to be everybody in the Grande Halle. It is one of the most existentially satisfying songs of recent memory, a simmering pot into which to pour your resentments, internal and external, before letting the band rip that pressure valve right off and to let all of your troubles run free. This is why we love live music.

Perhaps the biggest crowd of the night is saved for CHVRCHES, masters of the dark art of pop songwriting. The Glasgow trio are able to distil a track down to its bare bones, to make not one sound too many, to show off the glory of the song itself. It seems that Friday night and CHVRCHES are natural friends. There is a certain diversity to the set – the band can drop like a house DJ but they can do sweet like chocolate too – but there is perhaps a sense of repetition over the course of the hour’s set. Ultimately though, this is a crowd-pleaser, a suite of crystalline singles and singles-that-never-were to send the thousands in attendance off into their Friday night revelry.

By the time they are back on Saturday, there are some furrowed brows and delicate movements. But that’s ok because greeting their arrival is Snail Mail, the beautiful project of Lindsey Jordan. Her set is just what the doctor ordered, a revitalising but internalised blend of singer-songwriter integrity and esoteric storytelling, with traces of grunge in the mix to wake up the masses. Jordan seems genuinely overawed by the size of the crowd and the sense of occasion, but it doesn’t interfere with her performance, which is as sweet as it is formidable.

There is a sense all day on Saturday, as there has been for the whole festival, that everything is building towards the arrival of Bon Iver. There is just time for one last set first though, from the New Zealand-via-Portland psych-rock group Unknown Mortal Orchestra, who put out one of the sleeper albums of 2018, Sex & Food. They play songs from across their back catalogue, including So Good At Being In Trouble from 2013 that finishes with a full blown freak out, and this year’s American Guilt, a spiky, blistering guitar track that articulates the current State-bound political woes as well as any other. It is an energising set, and it sets the stage perfectly.

Easily the largest and most tightly packed crowd of the weekend awaits Bon Iver as Saturday night draws in. Amidst a sea of embracing couples, one can see too a tribe of lads start to temper their ladishness in preparation for a performance that will force them to deal with those most un-lad of things, emotions. What we get from Bon Iver is nothing short of stunning. A far cry from the lonesome woodsman that emerged in the late 2000s, Bon Iver is now a full band, a light show, an experimental aesthetic. It is reminiscent of a Radiohead gig, with intricately mutated layers of electronic compositions being manipulated before our eyes, as live guitars, brass and percussion bend and twist familiar songs into spontaneous new arrangements. 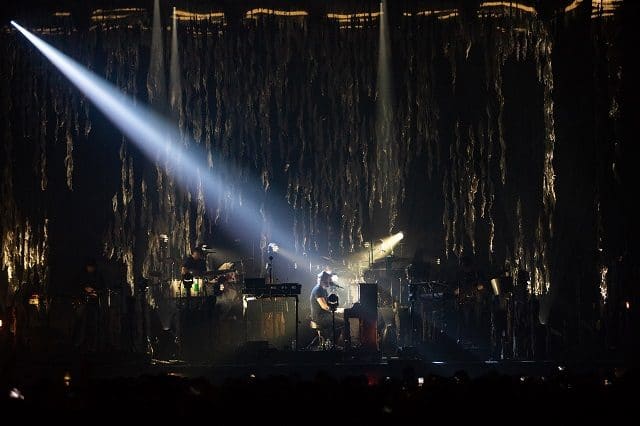 Justin Vernon has studiously crafted this version of Bon Iver over the last decade, to the point where it now offers him a home to do more or less whatever he pleases. Tracks from 22, A Million dominate, with 29 #Strafford APTS and 8 (Circle) leaving especially deep impressions. There are just a few audible naysayers in the crowd, fans from the early days who are perhaps not as familiar or as enthusiastic with the current direction of the band, and they are left to feast on the sole track from For Emma, Forever Ago that gets an outing, a sumptuous, haunting version of Creature Fear. Otherwise, this is a bewitching set from an act that is hitting creative and artistic heights that few of its contemporaries could realistically contemplate.

Saturday night continues long into the small hours, with sets from Peggy Gou and Daniel Avery amongst others bringing festivities to a conclusion. As an outpost for alternative music fans from France, the UK and beyond, Pitchfork Paris has its own unrivalled space in the annual roll call of festivals. With the summer at, or perhaps now beyond, saturation point, this festival smartly makes November its home, the curtain call for the year in live music. For as long as it books line-ups as diverse and experimental as this, its position is rock solid, too. 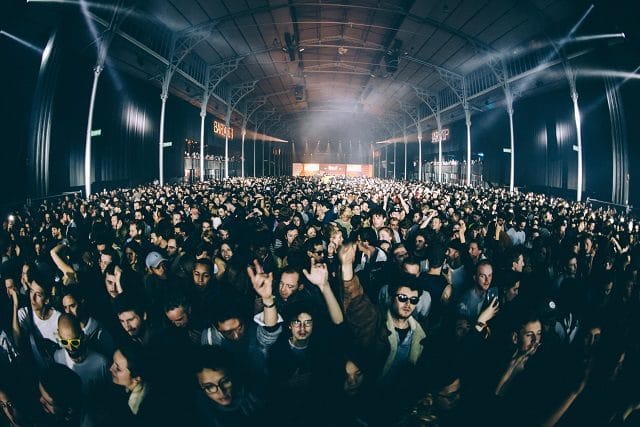