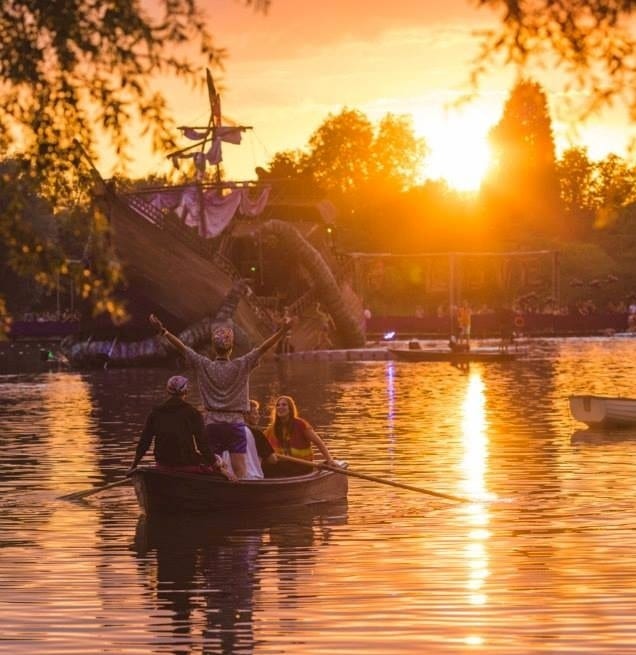 Secret Garden Party isn’t the most… let’s say proletarian event you’ll ever go to. Before you’ve even entered Cambridgeshire’s premier weekend of music mayhem – which for a start takes place on the vast landscaped grounds of a Georgian farmhouse, rather than your run-of-the-mill field or public park – you’ve probably encountered at least four groups of current- or ex-public school kids braying about how lashed they’re going to get and how, like, legendary Disclosure is going to be, yah. It is important to get through this initial stage of foreboding. Yes, it’s a festival full of well-off adolescents dressed in whatever Urban Outfitters says is cool this month. (Metallic leggings, apparently. And that’s the men.) No, this doesn’t mean it’ll be unbearable.

The festival is one of the original ‘boutique’ events, and you’ve got to hand it to them, they put the effort in to make it worthy of the description. Colourful strings of fairy lights illuminate your way. The trees are all lit up in lime green and lilac. One of the stages is a pirate ship in the middle of the boating lake, which you have to be punted out to. There’s a thatched statue (a thatchue?) of a giant fox wearing a Native American headdress, which proves extremely useful as a meeting point for when you inevitably lose your companions. (Let’s face it, no one is going to reply to, ‘If we get separated, meet me by the giant straw fox in the feather headdress’, with, ‘What giant straw fox in the feather headdress?’.)

In addition, each year the festival’s organisers set a theme to spice things up further, with 2013’s being ‘Superstition’. Both surprisingly and disappointingly, no one seems to have come as Stevie Wonder. In fact, although most of the festival’s attendees seem to be dressed up in some way – Secret Garden Party is clearly well-known as the place where repressed office types can ‘let their hair down’ (ie. ‘act like a tit’) – there are very few people actually dressed as superstitions. Points go to the men dressed as leprechauns, complete with wooden rainbow, as well as two separate blokes who’ve come as ‘three drains’.

Although a lot of thought has clearly gone into the festival’s layout and decoration, when it comes to the line-ups there more than a few issues that a quick glance at the charts probably could have ironed out. Bigger acts are crammed into smaller stages or find themselves playing early slots; meanwhile unknowns play to cavernous empty venues and less popular acts are strangely high up on the bill. Possibly the worst example of this is Disclosure’s set on Sunday afternoon; the sibling duo could comfortably have played the main Great Stage, but instead thousands flock to see them at the considerably smaller Drop stage, very few actually managing to hear anything.

The darlings of dance don’t help matters by turning up half an hour late and then putting on a staggeringly disappointing set – by the time they get round to playing anything that anyone wants to hear, most of the crowd has drifted away, bored. Next door, meanwhile, little-known Le Carousel are playing the much-larger Temple of Boom, watched only by some of the aforementioned pissed off Disclosure fans and a few people who are just having a bit of a sit down, slumped on haybales eating falafel as tumbleweed rolls past. Swap the venues over and everyone would’ve been happy, surely?

Friday night at the Great Stage sees another major case of bad scheduling. Virtually the whole festival (including various cast members of Made In Chelsea; told you this place was middle class) turns out to watch Bastille’s early evening set, before promptly buggering off again when The Strypes come on afterwards. It’s a real shame for the frighteningly talented, frighteningly charismatic and frighteningly young Irish blues-rockers: you can’t accuse them of being original in any way, shape or form, but when they pull it off with such aplomb, who cares?

Bastille, on the other hand, give a textbook performance that’s solid but nothing special: all the hits, padded out with covers of City High’s What Would You Do? and Snap!’s Rhythm Is A Dancer that in all fairness fit the electropop wonders like a nostalgic R’n’B glove. People do start turning up again for headliners Django Django but not in quite the same numbers as Bastille had pulled in earlier – a bit of a line-up rearrangement would’ve sorted this all out.

Djangos are clearly buzzing to be headlining a major festival for the first time but their performance, although still a cut above most other live bands, isn’t quite as electrifying as we’ve come to expect from the quirky art-rockers. The intricate intensity of their sound and lighting is perhaps more suited to a tent or indoor venue than a sprawling outdoor stage; a lot of their usual vibrant energy seems to skim over the crowd and dissipate into the night sky, rather than bouncing off the walls back into the audience.

Saturday’s main acts 2manydjs and Faithless have no such problems, the Great Stage and the grassy slopes surrounding it transformed into a open-air rave for the night – even the heavens opening after weeks of blistering sunshine can’t put a literal dampener on anyone’s spirits. 2manydjs are particularly good, Soulwax’s Dewaele brothers playing a perfectly-judged setlist of dance mixes that range from Metronomy to Robin S. Sandwiched between the two dance acts is ‘The Burn’ – the breathtaking annual fireworks display, culminating in the burning of the Lake Stage (ie. the pirate ship).

Although guitar music isn’t a huge presence at Secret Garden Party, the new wave of indie bands to emerge in the past year are nonetheless represented in Temples, Childhood and Wolf Alice. Local boys Temples kick Friday’s Great Stage lineup off with their creeping neo-psychedelia, their set interrupted halfway through by a low-flying Typhoon fighter jet, much to the band and audience’s surprise. They’re well received by the scattering of people lounging about on the grass, though not enough to make very many actually get up and go down the front, as frontman James Bagshawe keeps encouraging everyone to do.

Childhood bring the psych vibe over to the Where The Wild Things Are stage on Saturday afternoon, though their take on it is more jangly, late ‘80s Madchester than Temples’ heavily ‘60s indebted sound; they come back from a power failure after their first song to deliver a dreamy set that’s perfect for a sweltering afternoon. Wolf Alice round off this triumvirate of NME favourites when they headline Where The Wild Things Are on Sunday night, going down brilliantly with a youthful crowd who pogo around deliriously to the band’s punchy, euphoric ‘90s style alt-rock while frontwoman Ellie Rowsell nervously avoids a rogue wasp flitting around her mic stand. Best Sign of the Festival goes to the bloke whose brought along one with a marriage proposal for Rowsell on one side and ‘Can I At Least Go Through Your Bins?’ on the other.

Sunday sees everyone’s favourite dancehall DJ David Rodigan take to the decks with his boundless, infectious enthusiasm and encyclopaedic musical knowledge. Coming on straight after the traditional Secret Garden Party paint fight, Rodigan leaps around the stage exhorting his paint-covered audience to ‘Salute the old school!’ and ‘Gimme some signal!’, playing an irresistible mixture of jungle, dubstep, hip hop – and of course his bread and butter, ska and rocksteady.

Ska has already made an unexpected appearance on the Great Stage earlier in the weekend, when Youth Lagoon pulls out due to the death of a friend and is replaced at the last minute by little-known ska-pop band They Say Jump – upgraded after having impressed in the much-smaller Rhumba Rum Bar on Thursday night. They take to the huge stage as though they play venues that size every week, brimming with confidence and immediately getting everyone dancing to their upbeat offbeats. (Dare we say they entertained everybody far more than Youth Lagoon would have done?)

Dance and reggae aren’t the only genres on offer, though: acts of a more stripped down, melodic nature are well established in this year’s Secret Garden Party lineup. Sisterly threesome The Staves bring their lush harmonies and slightly crap crowd banter (“We’re sisters. We’re from Watford. Erm, that’s about it, really”) to the Great Stage on Saturday afternoon, while Serafina Steer, a.k.a. The-girl-with-a-harp-who-isn’t-Joanna Newsom, wraps Where The Wild Things Are in swathes of delicate, ethereal music that makes her biting, often-humorous lyrics stand out in stark relief. It’s a nervous performance, littered with wrong notes and false starts, but Steer’s likeable, self-deprecating demeanour and beautiful songs win everyone over. Regina Spektor signs the festival off on Sunday night in her only UK festival appearance of the summer, her chirpy, inventive songs unfortunately tarnished by drum ‘n’ bass bleedthrough from another stage, and some drunk morons screaming to each other at the back.

It’s not all about the main stages, though, at Secret Garden Party. It’s easy to spend hours wandering around the craft stalls and smaller tents scattered around. The Village Hall’s army of relentlessly chipper, zany volunteers offer an array of activities that range from the Hokey Cokey, to (clothed) life drawing, to forming a ‘village choir’ from festivalgoers, who are taught a three-part harmony rendition of Musical Youth’s 1982 reggae hit Pass The Dutchie. Perhaps the sweetest moment of the festival comes during the life drawing, when the compere drags two unsuspecting passers-by over to be subjects. “We’re engaged,” they reveal when asked if they’re together. “Ooh, when did that happen?” asks the compere. “Er, about five minutes ago.” Cue mass celebration. Elsewhere, smaller music tents such as the Small World Solar Stage and the Living Room offer respite from the sun with cool drinks, a shady place to sit and smaller artists playing more informal, acoustic sets.

Secret Garden Party may suffer from a little disorganization and more than its fair share of over-extroverted idiots doused in glitter, but its sumptuous surroundings, plethora of things to do and see, offbeat blend of big names, unknowns and cult figures, and general wildheart atmosphere are more than enough to paper over these cracks. If you go to festivals mainly for the music, or find adult men dressed as brides disturbing, then fair play, it’s probably not for you – but if you want to party all weekend in a crazy dreamscape, Secret Garden Party’s the place to do it.