Festival Review: Sounds From The Other City 2014 @ Various Venues, Salford 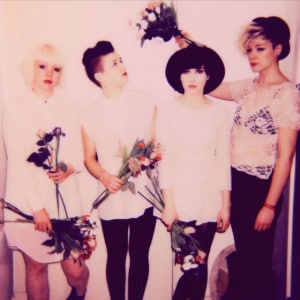 There are people running around wearing big papier mâché eyeballs on their heads. Some are dressed as cardboard fingers. There are others walking around wearing cone hats. This is actually typical fare at Sounds From The Other City, which once again graces Salford and the May Bank Holiday weekend.

Now 10 years old and as spontaneous and unpredictable as ever, this year sees the University of Salford’s rather grand Peel Hall as the festival’s biggest stage, to the rather tiny back room of The New Oxford pub off the main Chapel Street road. With Manchester’s leading promoters all involved, a few surprises were always likely: from bands you’ve heard of but haven’t seen yet, to those you probably haven’t got much of a clue about but, owing to the festival’s history of delivering bands before they go onto bigger things, are probably going to be rather decent.

From experience, the best way to tackle SFTOC is to go on a semi-informed-cum-somewhat random jaunt down Chapel Road. Armed with a screen-printed programme, the day began underneath a bridge.

First Chop Brewing Arm have attracted many plaudits for their “uncompromising, hop forward beers”. Hoppy they are indeed, especially the one aptly titled Hop (4.1% ABV). But what they also deserve credit for is their innovative use of space; housed beneath a railway arch carrying trains to Salford Central station, there’s a fully-stocked bar, brewing facilities and also a stage in a rather reasonably sized room. Quite surprising how much space there is. Anyway, today it houses Hey! Manchester’s selection.

Hailing from Toronto, a band called Gay is likely to arouse either curiosity or deep suspicion. It’s also rather difficult to find out much about them: it’s not particularly Google friendly, shall we say. Still, they’re excellent; a mixture of The Modern Lovers, Talking Heads with a bit of C86 thrown right in, as tracks Chrysotile and Asbestos demonstrate. Something of the Clap Your Hands Say Yeah! about them as well.

They’re a hyperactive, jolly lot on-stage – it’s quite impossible not to like them, actually, especially when they introduce one of their songs by saying “this song is about baseball, which is like Canadian lacrosse – I mean, cricket!” Calling everyone his “Salford cousins”, singer Tom Avis seems to win everyone over. Rightly so. Gay in the merry, lively sense.

Finally, Young British Artists are moving at upwards and at quick pace. Manchester has lauded and enjoyed the quartet for a few years now – they last played SFTOC in 2011 – but life has seemingly got in the way. Still, their debut album is finally coming soon and The Old Pint Pot – a SFTOC stalwart of a venue that sits over the River Irwell – is packed.

As ever, they’re furious, intense and full of energy, a joy to watch: like The Walkmen but arguably more frenetic and, at times, more powerful. Time to let those beyond the Manchester borders yield to them. Exciting times hopefully lie ahead for the YBAs.

Back at First Chop Brewing Arm, Thomas Truax rushes in fresh from the road and gets out his contraptions: the Hornicator (a type of horn turned microphone is the easiest way to describe it), Mother Superior (a sort of carousel-like drum machine) and the Stringaling (a bongo drum fixed onto a piece of tumble-dryer pipe, which also has strings on that can be stretched and played). There is no soundcheck. He apologises in advance to the soundman.

Actress Maxine Peake is at the front of the audience, enjoying herself. As is everyone else, mind, especially during Full Moon Over Wowtown. Here, Truax describes a world where everyone holds hands and sings as a full moon, lighting up the venue’s ceiling and emanating from his guitar, shines above the ‘town’. He jumps off-stage into the crowd, strumming his guitar and delivering a sort of serene howling, before starting his journey around First Chop while playing.

He goes into the office, out of the back door, into the street behind, back round to the front and then back on-stage. He was probably off-stage for a good three minutes or so, before his guitar and howling come back into ear-shot. He climbs back on-stage, panting and out of breath. He didn’t realise how big the trek would be. Everyone laughs and loves it. He’s the perfect act for SFTOC: the epitome of DIY, performance art and spontaneity.

In Peel Hall, Manchester’s promotion big-boys Now Wave house their selection for the day. The hall often has midday concerts on Tuesdays – the odd bit of brass and the like – although it’s unlikely they’re as groovy and unusual sounding as Leeds’ Adult Jazz, although a trombone did feature at one point.

In some respects they’re rather Dirty Projectorsesque, but there are moments where the repetitive rhythms, vocals and the percussions are somewhat reminiscent of Talk Talk. Track Am Gone initially begins as something of a jam session but there’s plenty of method here, eventually turning into a type of relaxed yet intricate-sounding swagger. Interesting. Very interesting.

Manchester’s Bernard + Edith have received a fair bit of attention as of late and coupled with their label Sways Records establishing quite a dedicated following in the city, it means Peel Hall is rather busy. There is something of a buzz surrounding them.

The slender looking vocalist Greta ‘Edith’ Caroll arrives on-stage wearing a sweeping black dress while Nick ‘Bernard’ Delap on synth and part of the once heavily talked about Egyptian Hip-Hop looks rather… hip hop. Once things begin, ‘Edith’ goes into almost full Kate Bush-cum-Florence Welch mode: the dancing, the vocals, the rather heavy breathing, the overall look. It carries on throughout, with ‘Bernard’ persevering away on synth, looking rather isolated, providing trip-hoppy, London Grammar/The xx beats and the like.

It’s a difficult one to judge this. The Kate Bushness of Caroll is almost too much and it all feels rather uneventful and uninteresting compared to everything else witnessed and experienced so far today. Unsure whether the grand lecture room feel of the room fully suits them as well: not really conducive to their sound. Just not sure. Hope to be convinced.

If Bernard + Edith leave question marks, fellow Manchester-based PINS certainly don’t. They’re a truly glorious mix of shoegaze, punk and post-punk, with singer and guitarist Faith Holgate at times veering towards Patti Smith and then back to Karen O. Get With Me, off last year’s album Girls Like Us, certainly straddles between shoegaze and punk, while Say To Me is wonderfully raw and visceral. Savages would struggle to out-do this.

Meanwhile, album title track Girls Like Us is majestic, commanding and seductive: you feed off the mounds of confidence they display. As does everyone else; by the time Waiting For The End comes the majority of Peel Hall is at the front, dancing and jumping away at the band’s command. The band revel in this as well, going into the crowd to join them.

PINS look the part and you sense they’re certainly beginning to know this. Already on Bella Union, they’re tantalisingly close to breaking through, with the soon-to-begin tour alongside The Jon Spencer Blues Explosion a massive indication of this. No, it shouldn’t be long now. They’re a real privilege to see this evening.

Over the last 10 years, Sounds From The Other City could have easily morphed into something larger, more corporate and more SXSW-like. Yet it has remained true. This is something everyone who’s interested in music throughout Manchester and beyond can take some sort of ownership and pride in. It is welcoming and inclusive, with a warm community feel that permeates every aspect of the festival itself.

It’s been said on this site before that “Sounds has become one of the country’s foremost festivals showcasing new and emerging talent”. That remains true. But it’s also one of the finest outlets for independent music and culture we arguably have in the north-west, if not the country. It is, in short, something to treasure.