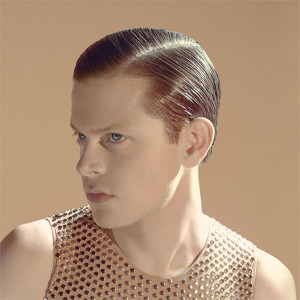 Visions is a fairly new addition to the London festival scene. After a successful debut, the Hackney one-dayer expands slightly on the format that proved so popular last year. With 28 bands playing across four different venues, it doesn’t have the epic scale of other inner-city extravaganzas like The Great Escape or the sadly departed Camden Crawl, but it does have a far more intimate feel. From the arts studio vibe of Oval Space to the cosy surroundings of the Brewhouse, each place has its own atmosphere. Most of these choices are inspired and the organisers should be commended for that.

However, as proof that you can’t have control over absolutely everything, there are some disappointments early on in the way of last minute cancellations; Fat White Family and IYES both pull out due to illness. Whilst it’s unfortunate, there’s still plenty of firepower elsewhere on a bill that seems geared to direct people towards their new favourite artist. Those who may have been looking forward to the latter might have found solace in Yumi Zouma, a New Zealand quartet specialising in slinky electropop. Elsewhere, Jaakko Eino Kalevi‘s sound shares more than a passing resemblance to The Human League in places. Kalevi himelf is fairly restrained, save for the odd falsetto that takes everyone a little by surprise.

Waving the flag for classic jangly indiepop are Veronica Falls and Alvvays. The latter play a set that is dogged by technical issues that prompt them to leave the stage temporarily, but once they return, things get a bit more stable and it doesn’t take them long to win the crowd over. Archie, Marry Me is the standout moment, but their entire set is a joy.

The Laundry houses the lion’s share of the heavier side of Visions’ line up. Cheatahs earn a very respectable early crowd for their shoegazy-rock which, whilst familiar, has some satisfactory moments and, judging from set closer The Swan, they are more than capable of writing songs to match the bluster. Things start to get slightly rowdier when Eagulls take to the stage in the mid-afternoon. Frontman George Mitchell prowls the stage constantly throughout as his bandmates make a racket. One or two tunes blend into each other a bit too much but it’s still a confident and assured performance that encourages some moshing down the front and a couple of brave crowdsurfers.

But that’s nothing compared to Andrew WK. He sticks out like the sorest of thumbs on a bill that is all about looking forward. If the giddy onslaught of pop punk and nu-metal that’s pumped over the speakers beforehand hadn’t revved the audience up already, it doesn’t take long for things to go crazy when he finally emerges. What happens for the best part of an hour is total carnage – enough for what looks like all of security to stalk the front of the stage in anticipation. There is crowdsurfing galore, lights get knocked over, amplifiers get shaken all over the place, there are stage invasions, the video screen at the back of the stage gets destroyed. It’s the opposite of everything else that is going on in Hackney, which makes it all the more fun.

The most frustrating venue proves to be the New Empowering Church. The unusual Moroccan touches inside are fun but it is also prone to Morocco-like temperatures. This isn’t an issue early on in the day when the intriguing droning electronica provided by Moon Gangs throbs its way through a venue that isn’t anywhere near full capacity, but it is when you’re trying to enjoy some of the evening entertainment. It also attracts a rather chatty crowd, which means that artists such as Eleanor Friedberger and Perfume Genius lose out massively. They both persevere regardless, which is testament to their professionalism.

Despite all of this, Perfume Genius is the most impressive performer at Visions. It is a set dominated by older cuts, not that there’s any problem with that. This is a reminder of what Mike Hadreas can do so well – break your heart. Dark Parts is devastating, Hood is defiant and Learning is absolutely beautiful. There’s also a sprinkling of new material from Hadreas’ eagerly-awaited third album, Too Bright. Of those, recent single Queen, dark and foreboding, gets an enthusiastic response and My Body, dispatched a few songs in, feels similarly sinister.

There’s a lot going for Visions, but some improvements are needed. The line-up is one that encourages punters to really search around for something spectacular (as well as offering a few crowd pleasers) but one or two venues wouldn’t be missed if they were excluded from 2015’s instalment. With a few more tweaks, this could be an unmissable event.