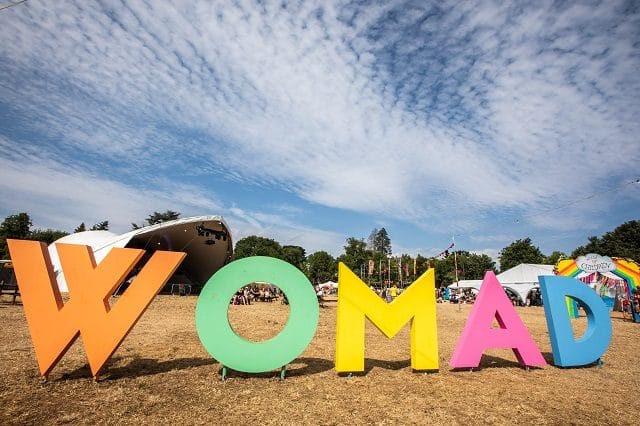 The 36th WOMAD festival may have coincided with depressing reports on the difficulties certain artists faced in obtaining visas to perform in the Brexit-fixated UK but even they could not diminish what was to prove another gloriously successful event that showcased a head-spinningly brilliant array of music from around the world.

Thursday sees Ken Boothe ease us in gently with his mellow, sun-kissed reggae songs, reflecting the optimistic early mood of the festival well. Everything I Own strikes a particularly crowd-pleasing note and he’s the first to espouse the central festival messages of love and unity. The first full day of performances on Friday sees us cross continents in typical WOMAD style. Niger may not be talked about in the same way as the likes of Mali when it come to music but Tal National prove themselves more than capable practitioners of urgent, rhythmical desert rock. The scorching sunshine of Charlton Park sees their band leader draw unlikely comparisons between the weather of the UK and Niger before he praises the “wonderful, open people” who have come to watch them. Estonian artist Mari Kalkun is positioned at the other end of the musical spectrum. She plays an alluring set using a kannel (an unusual twelve stringed instrument) and accordion which imagines Vashti Bunyan if she had decamped to shaded Baltic woodlands. It’s appropriate how she appears in the leafy surroundings of the arboretum – there’s something utterly natural and distilled about her music. 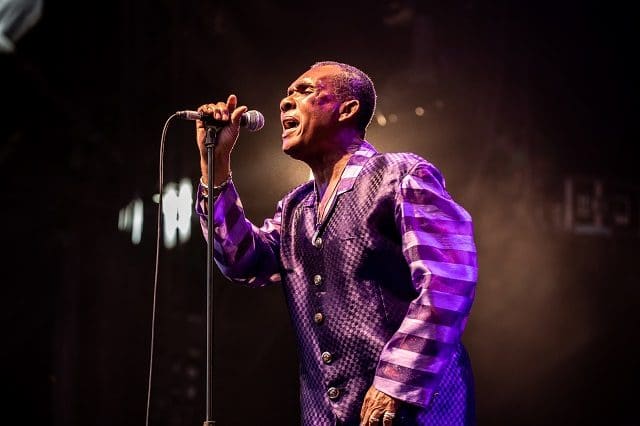 LADAMA are a female four piece that hail from Venezuela, Colombia, Brazil and the USA and they make an immediate impression with their liberated and lithe music that calls upon the traditions of their home countries. A gentle Latin breeze runs through their set, with their songs having an organic, uncomplicated quality with soft tropicalia accents. La Dame Blanche arguably registers the strongest performance of the day so far. Entering the stage smoking a cigar she oozes genuine star quality, not to mention not insignificant attitude. She plays a supercharged set that integrates on-point rapping, frenetic beats and impactful bass. Towards the end of her appearance she adds flute to the highly distinctive mix, all of which suggests some sort of mainstream breakthrough could be imminent. 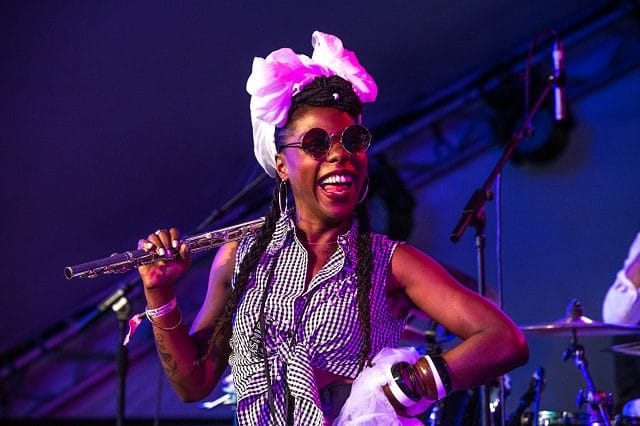 Leftism by Leftfield still retains huge crossover appeal and what is reported to be the last live performance of the album in full brings Friday to a close. In many ways they are an ideal WOMAD headliner; they incorporate multiple genres, emit pure positivity and get the crowd dancing. Black Flute and Space Shanty remain prime techno bangers while Melt and Original demonstrate the more nuanced side to the album. All in all, they prove it is still a near faultless album and full of messages that find a welcoming place in the WOMAD crowd. 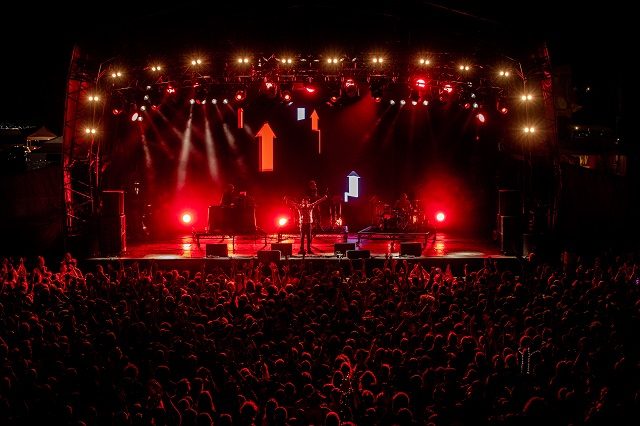 The Bollywood Brass Band and Jyotsna Srikanth kickstart the music on Saturday afternoon. Burgeoning and brimming full of life like the country that inspires their music, they play selected tracks from old Hindi films alongside music from their new Carnatic Suite: A Day In Bangalore EP. Sprawling yet channelled, their music shows how the culture of India simply doesn’t do things in half measures. Ethiopian singer Selamnesh Zemene meanwhile offers a primal expression of human emotion on the main stage, her voice raw and incisive, seemingly addressing some higher spirit. Next, we move on to catch Turkish musician Gaye Su Akyol.  Wearing a gold cape and with her band members in black masks, there’s a visual sense of drama on display but importantly it is matched by the music. It suggests a new youthful Turkish psychedelia full of exclamatory, swirling moments yet also strikes a darker, sombre tone with references to recent Turkish political developments. She’s definitely another one to watch. 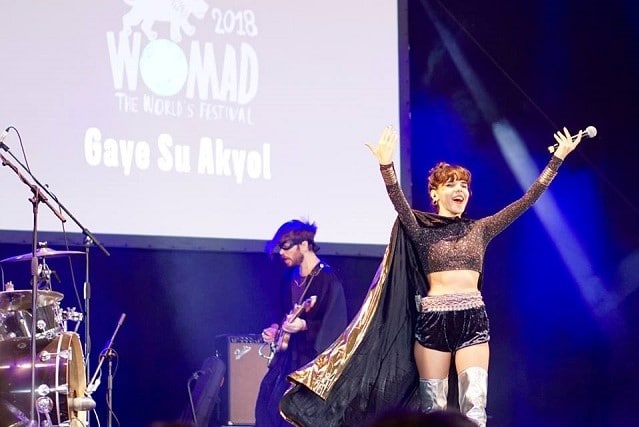 The high standard continues with Maalem Hamid El Kasri who works to preserve the Gnaoua music of his homeland Morocco. His playing of the guembri (a three stringed lute) may take centre stage but he’s accompanied on stage by four gold-clad singers/percussionists. They combine to make a joyful sound while also reinforcing the strong dance element of WOMAD. Next, the moments of Ivory Coast-based singer Dobet Gnahoré’s set that we catch suggest a softer, far more finessed and mellifluous proposition. French singer Camille meanwhile extends this feeling further, playing a typically elegant set drawing largely from last year’s Ouï album. The likes of Fontaine De Lait and Je Ne Mâche Pas Mes Mots don’t deserve to be met by the first real downpour of weekend but it can’t dim her appeal. It’s left to Amadou & Mariam to end the second full day. They are perhaps this weekend’s most obvious proponents of joy-through-music and play selections from last year’s fine La Confusion album. The effusive C’est Chaud and bouncing Bofou Safou stand out but their extended jams also go down a storm. Mariam’s touching expressions of love for her partner and Amadou’s lion-like calls to the crowd add more in the way of endearment. 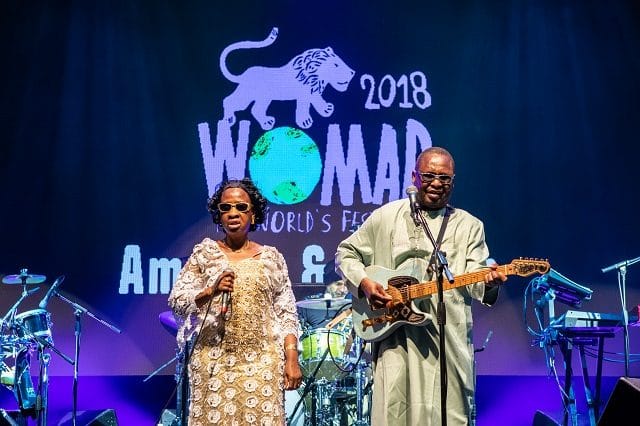 Sunday afternoon sees another Ethiopian singer take to the stage and while Meklit’s music contains elements of classic Ethio-jazz she also conveys a bold, soulful sound that exudes supreme confidence. Last album When The People Move, The Music Moves Too is well represented with the likes of Supernova remaining in the memory long after her set finishes (it’s also one of many performances over the weekend that have a BSL interpreter on stage). Northumbrian sound recorder Chris Watson meanwhile offers something completely different later, with his recordings of “the songs of the natural world” being played out and contextualised in the DB Soundscape tent. Among the energy and movement of the festival he offers a soothing, cleansing, meditative interlude. 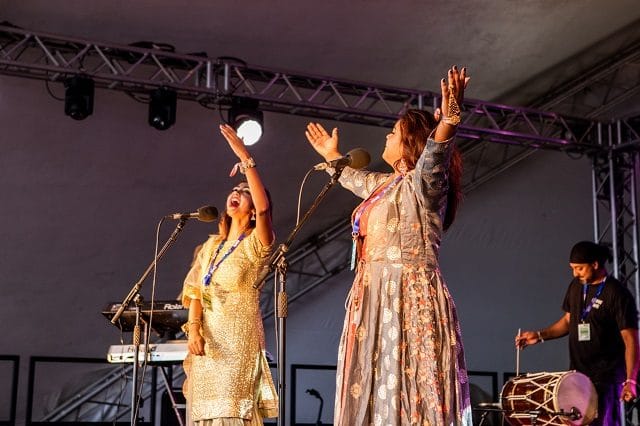 The Richard Spaven Trio keep things at a similarly cooled-down temperature. Spaven has worked with the likes of The Cinematic Orchestra and Flying Lotus and it shows, his music sounding clinical and contemporary. Hashmat Sultana, two sisters from India, quickly pick up the pace and provide an injection of glitz with their Sufi inspired songs. Full of strident exclamations and high octane addressing of the crowd they make a strong mark on the festival (even more impressive given how their earlier set on Saturday had to be cancelled due to delays in their visas being confirmed). It’s left up to fusion veterans Thievery Corporation to close the festival. Like Leftfield earlier they introduce a cast of singers to bring their tracks to life and the material played from latest album Treasures From The Temple sounds polished and impactful. They strike a suitably uptempo, celebratory note to ensure the festival ends on a high note. 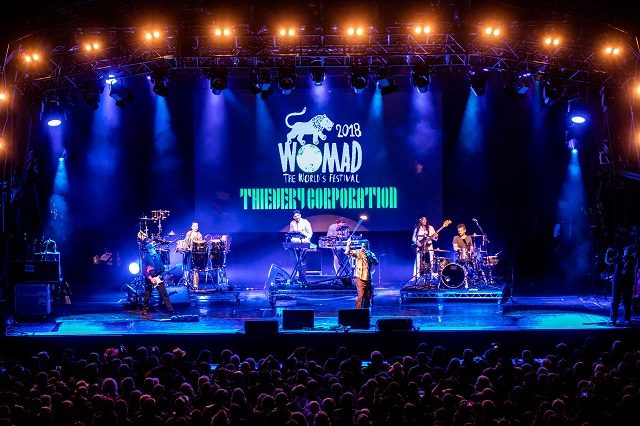 Stories of festivals failing or attendees having bad experiences may still surface but it’s hard to imagine these ever being associated with WOMAD. Even in the face of political adversity the organisers offer such consistent, high quality, broadminded events (this review focuses purely on the music but the range of poetry, talks, cookery classes, dance and music workshops and children’s activities at this year’s event could easily form a similar length piece). As always, African artists made a major impact and the refreshing prominence of female artists – something WOMAD has always been ahead of the curve on – offered further hope.

The UK may be in some ways becoming a more insular, disconnected and toxic place to be but WOMAD continues to play an essential role in helping to dissipate this. It shows a vital alternative, highlighting the strengths that do exist among the more progressive, open elements of UK society. This year’s event proved that concepts such as inclusivity, empathy, compassion, warmth, mutual support and life-embracing joy can still flourish. In these uncertain times it deserves everyone’s full support.