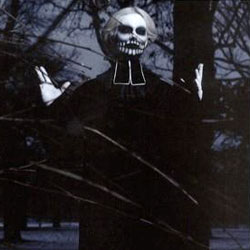 The stage is dark apart from 20 lampshades of different sizes that wink on and off eerily. As the smell of incense fills the air, two green lasers pierce the synthetic fog and a thunderous, drone-like bass synth shakes the foundations of Brixton Academy’s voluminous hall. This is Fever Ray, the solo project of The Knife‘s Karin Dreijer Andersson, and the stage is set for a sombre yet awe-inspiring performance.

It’s an eagerly anticipated show because Fever Ray’s self-titled debut album was a masterpiece, listed among many reviewers’ best albums of 2009. Fever Ray was conceived when Andersson and her brother Olof took a break from The Knife after their third album Silent Shout. Alone, her music took on a moodier, darker and more mysterious twist – electronic but somehow earthy, and prone to moments of shimmering beauty. She wrote the album while raising her second baby and has said her state of mind at the time – awake but exhausted – aided the process by allowing subconscious thoughts to seep through into her lyrics.

Watching Fever Ray, one sees these shadowy, subconscious themes given an appropriately muffled visualisation. Smoke and darkness obscure her and the four men in her band. As if in a dream, you never see Andersson’s face. It’s her habit always to hide from view and for this show the performers are backlit, silhouetted among the winking lampshades and synthetic smoke.

It’s not that she’s a retiring character. In fact, Andersson has a passion for costume and spectacle. Here, she is wearing what looks at first like a sombrero but turns out to be a headpiece sewn to her black jacket and short trousers. The outfit is old-fashioned and slightly menacing, reminiscent of 16th century witch hunters and their persecution of subversive women. It’s as though she just walked in from the set of Arthur Miller’s The Crucible.

The music is also deliberately unsettling. Loud and deep, with synths that reverberate and enclose the room, the sound artificially summons a note of intimacy in the Brixton Academy’s cavernous hall. Andersson’s vocals are low in the mix and she makes electrifying use of a vocal transformer to pitch down her voice on several tracks, producing a deep and unnatural baritone that sounds like the otherworldly communication of a malevolent spirit.

Two band members play mainly percussion while a third operates a synthesiser and a fourth plays guitar. On a couple of numbers the wall of guitar distortion is a little overpowering. The guitarist’s decision to trash his instrument at the end of one song is a little out of place because the music works best when it is sparse, leaving space for the viewer’s imagination to conjure up its own impressions. This sparseness is in line with Andersson’s lyrics which are minimal but pregnant with imagery. On the whole the show does justice to the superb Fever Ray debut while giving a glimpse of new material such as a cover of Peter Gabriel‘s Mercy.

What’s interesting about the performance are the little inexplicable details. At one point the lighting changes to illuminate the performers from the front, and for a few seconds we see that the inside of Andersson’s hat is patterned like a chessboard. During another song, one of Andersson’s musicians takes a cross the length of a hockey stick and circles her, gesturing into the air as if batting away flies. The show is an esoteric display, almost like performance art rather than a gig. No one seems to expect an encore once the band leave the stage. But it is a magnificent albeit quirky experience, a fitting accompaniment to the music’s mysterious charm.