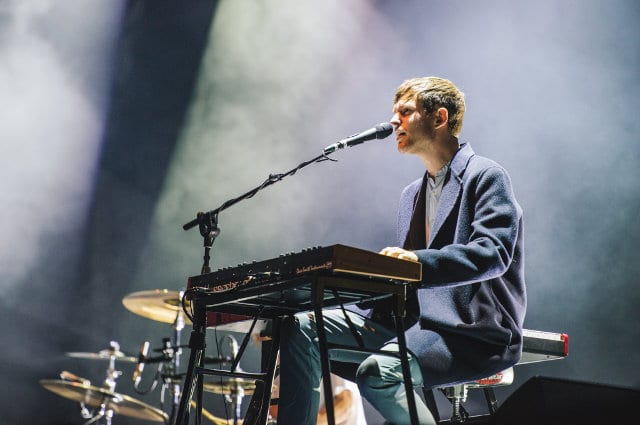 Stormy skies and flood warnings preluded the 2016 edition of Victoria Park institution Field Day’s weekend of music, and ahead of opening the grass had already been churned to boggy mud. From the entrance gates to half way across the site, slipping and sliding was the only method of travel, and it seemed on the first of the event’s two days that turnout was down a little, perhaps as a result.

Yeasayer, a band that seemingly started out as a multi-dimensional global force for spaceman domination from a pyramid in Egypt, have latterly gone for the sub-Depeche Mode end of the market with the likes of Ambling Alp, and their late-starting main stage slot is watched by a huddled mass of unmoving faces atop anoraks and ponchos. They did their best to enliven the mood, and Bradford Cox’s Deerhunter on the same stage went some way to harnessing it, but above the clouds loomed threatening and underfoot the ooze parted, congealed, squelched. Intermittent rain interrupted, and under cover of canvas watching the early afternoon likes of The Invisible, LUH and Anna Meredith is where most of Saturday’s hardy souls were to be found.

In one such tent was Dilly Dally, a band led by the twin force of guitarist Liz Ball and singer Katie Monks, ladies who clearly know a thing or two about Sonic Youth‘s back catalogue. Monks’ straining vocal chords belt out tracks from last year’s debut album Sore, and you find yourself hoping she treats them with honey and lemon before and after. It was an impassioned prelude to more of a Sonic Youth vein dropping by on Sunday, in the form of founding member Thurston Moore – of whom more later.

The delicate piano and heartfelt falsetto of James Blake graced the main stage for Saturday’s headline spot. While undoubtedly accomplished, the Mercury-nominated Beyoncé collaborator’s music is not the sort to get any parties started, especially in the unseasonably chilly evening that greets him. For much of what feels like an oddly intimate set, given the occasion, he is seated at his keyboard, yet reaction to The Wilhem Scream in particular suggests more than a captive audience.

By Sunday, the storms have led to the relocation of the Shacklewell Arms stage from one corner of the site to the other, and to the main area of passage between the stages becoming an increasingly impassable quagmire. Bowed, but unbeaten, we traipse on, refusing to be separated from organic burgers, vegan sushi nor craft beer in small cans.

At the Verity stage, Mind Enterprises‘ self-help through hypnotic funk takes a while to rise above a mix as muddy as the sodden ground, but rise it does, and recent single Give Me Light is a percussive, bass-heavy joy here. Arthur Beatrice, at the Return of the Rural stage, wed dark atmospherics to polished dance-tinged indie, and the vague hints of a subtler Florence Welch to Ella Girardot’s soaring belt suggest a pretty far-reaching appeal.

At around 13.30, there’s a big pilgrimage over to the main stage where Parquet Courts‘ late arrival is atoned for by their spikily witty take on NY punk. One Man No City, with droning Tom Verlaine-esque guitar from Austin Brown, is an early highlight, along with Paraphrased’s stop-start garage-rock.

Steve Mason draws a large, loyal crowd to hear tracks from Meet The Humans, arguably his most open and melodic album yet. Planet Sizes both unfolds and engulfs in glittering fashion, Alive shuffles with positive potency and Hardly Go Through soars away on a wave of emotion. As he sings “And I can hardly go through without you, honey” on the latter, he captures the mid-afternoon mood of optimism perfectly.

Kero Kero Bonito may stray close to being this year’s novelty act with their kitschy, bouncy anglicised J-pop (and on-stage soft toys), but the crowd are won over by singer Sarah Midori Perry’s endearing stage presence and disarming energy, not to mention their songs about encouraging flamingos to “show off their natural hues”, eating jelly and cake at parties and playing classic computer games (but not all at the same time).

Given the gloomy skies, the Thurston Moore Band are fittingly thunderous. Speak To The Wild’s low rumble – provided by My Bloody Valentine‘s Deb Googe and Sonic Youth bandmate Steve Shelley – alternates with crystalline leads, a little light relief before Aphrodite’s squalling whammy-bar abuse. By the end of the ominous Ono Soul – “Bow down to the queen of noise” – Thurston’s in full ear-shredding flight, thrashing his Jazzmaster behind the bridge and forcing its strings against the pickups; the magnetic squeal slices the early evening air.

“We’re Blossoms from Stockport and it’s lovely to be here,” announces Tom Ogden from the Shacklewell Arms stage. Outside, the heavens have opened again, and with a crowd grateful for shelter it’d be easy to put in a perfunctory performance. But they grasp the opportunity and are convincing from the off, closer to synthpop than the chart-bothering ilk of a decade ago they might recall. At Most A Kiss has a glammy swagger, and Across The Moor’s shuffling funk and the anthemic Getaway show Blossoms are a bit more interesting than your average skinny-trousered indie boys.

Meanwhile, after a mercifully short dash to the MOTH club stage, there’s Ben Watt and Bernard Butler, with a set of beautifully considered electrified folk, drawn mostly from solo return Hendra and this year’s Fever Dream. Watt alternates between acoustic guitar and electric piano, while opposite him, Butler does as Butler does, his wild, distorted leads never outstaying their welcome.

There’s a joyous moment around midway through when Watt picks up a Telecaster, leading the small band into the jazzy Some Things Don’t Matter, from 1983’s sublime, intimate North Marine Drive. By the time Watt sings “You make me feel as right as rain,” from a warm, hopeful Hendra, the sun has reappeared, gently baking our backs at the edge of the tent.

Mbongwana Star provide the first real gear-shift of the afternoon with their raw, riotous and rambunctious blast of Congolese street sounds. They bring invigorating rhythms, liberated guitar riffing and exhortative vocals to the mix, projecting a defiant joyfulness that’s impossible to resist. It won’t be the only time this summer that they mark themselves on the memory of hundreds.

Despite mixed reports, not to mention the distinctly lacklustre Frankie Sinatra, The Avalanches‘ return after 16 years has their tent close to bursting with bodies and anticipation, wound up by an intro tape including Prince‘s Alphabet Street in all its glory. They take up positions behind turntables, and cut, chop and mix the same kind of varied mishmash that made Since I Left You the crossover hit that it was. 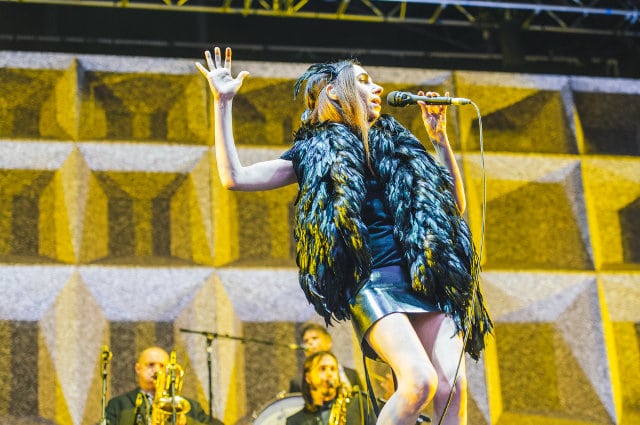 The mid-section of Television‘s Marquee Moon is transformed into an unlikely banger early on, and the crowd is brought close to eruption by the evergreen likes of Bowie‘s Let’s Dance and the earth-shaking groove of The Slits‘ I Heard It Through The Grapevine. While some seem disappointed by blokes with decks playing other people’s music, it’s hard to imagine what else they expected.

John Grant plays somewhat to expectations too, and those expectations, great though they are, are matched by a man clearly in his pomp. His second album Pale Green Ghosts raised the bar, and this year’s follow-up Grey Tickles, Black Pressure has given him further material to vary his live repertoire. While on record individual songs make more sense than the whole album, live those songs come into their own, not least for his clear enunciation of his lyrics. He’s helped by unexpectedly sunny weather when we were promised downpours, and a party atmosphere greets Voodoo Doll, an afternoon open air disco breaking out and given further purchase by Pale Green Ghosts. The bulk of his set, featuring the none-more-timely Glacier, the new album’s title track and of course GMF, shows off beautiful music paired with witty, on-the-nose lyrics – it’s a winning combination, and Grant shows it off well.

As the evening sets in and Field Day starts winding to a close for another year, there’s just time before PJ Harvey‘s headline set to catch Beach House in a crammed tent. Tracks from Bloom and Depression Cherry dominate as they quickly envelop the eager crowd in a beautiful, analgesic haze. Yet it’s still Ten Mile Stereo from Teen Dream that forms the keystone of their live show, its glorious musical charge-to-the-finish getting stronger each time we experience it.  During set-closer Sparks, Victoria Legrand leans back to sing “And then it’s dark again, just like a spark” directly into the heavens with even more exaction than usual and it’s as if the sound of a thousand hearts melting at once can be heard. Despite their stylised mystery and coveted sense of enigma, it proves they’re still one of the most emotionally connective bands around.

Back at the main stage, PJ Harvey’s arrival is heralded by drummers, thumping out Chain Of Keys’ martial tattoo, joined by lowing brass. The band – including long-standing henchmen John Parish and Mick Harvey, along with multifaceted indie linchpin Terry Edwards – assemble as a huge grey wall is lowered upstage. What follows is almost the whole of her recent The Hope Six Demolition Project, the emphasis heavily on performance as Harvey prowls the stage, the giant screens’ crisp monochrome emphasising her dark, majestic presence.

Songs from Let England Shake are well-received, with the bassy growl of The Words That Maketh Murder leading to a mass singalong (“What if I take my problems to the United Nations?”) that’s about the most engaging moment in an accomplished, if oddly cold, distancing first two-thirds or so. But after a grinding The Ministry Of Social Affairs, they tear into a thrilling 50ft Queenie, followed in short order by a slinking Down By The Water, To Bring You My Love and a climactic A Perfect Day Elise. If enthusiasms were dampened at all by unpredictable weather or unsure footing it’s all forgotten by this point, and, almost a decade into its life, Field Day is a firm fixture in an increasingly clogged calendar.