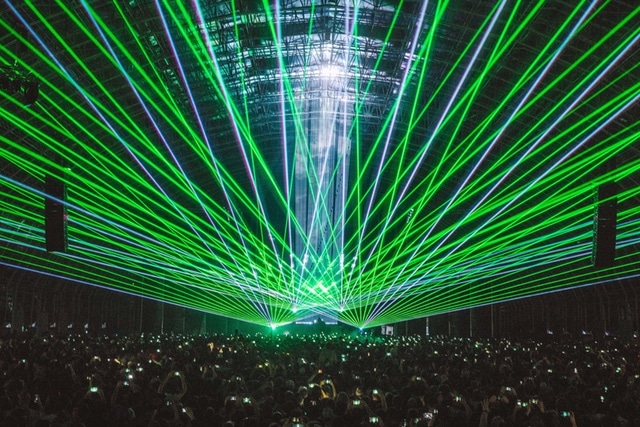 After last year’s slippery conditions, the run up to Field Day 2017 is spent nervously checking the weather, preparing for the worst. We needn’t have worried – it’s glorious onsite. Back to a single day for this year, but no less starry, the bill is packed; the fact that there are quite so many clashes speaks volumes about the quality, and diversity, of the line-up – perhaps London’s best this year.

Already high with anticipation, over on the Crack stage Johnny Lynch, aka Pictish Trail, is warming the crowd up his own way. “Are you pumped?”, he asks. There’s a smattering of whoops. “Well settle down, ‘cos I’m going to do some tender ballads.” Authentically hirsute and wistful, his folk songs – crafted in a caravan on the Hebridean Isle of Eigg – are sprinkled with beats and synths which sparkle like Lynch’s onstage garb. The uptempo, rambling Dead Connection is an early highlight. Next, Kaitlyn Aurelia Smith brings her updated new age ambient vibes to a busier-than-expected tent. Synths bubble away, vocals are gently filtered in and saxophone samples drift in and out of an early afternoon palate cleanser of a set; we’re reminded of the appeal of last year’s EARS album.

Imarhan’s sound will be familiar to anyone acquainted with their fellow Tuareg desert bluesmen Tamikrest and Tinariwen. From Tamanrasset, a town at the Algerian end of the Sahara, their music shares a rhythmic compulsion with that of their Malian counterparts which, in the blazing afternoon sun, is joyously and hypnotically transportive. Lacking Tinariwen’s vivid costumes, they dress instead in straightforward jeans and t-shirts, but there’s nothing at all ordinary about this music. Meanwhile on the Shacklewell Arms stage, from that wellspring of oddball Australian psych-poppers, there’s Methyl Ethel. Alternating between guitar and triggering loops and fuzzy frills, frontman Jake Webb has a vaulting falsetto, but they’re not always quite as interesting as they could be. Weeds Through The Rind and the recent L’Heure Des Sorcières are appealingly jittery and multi-textured, though.

Atlanta-via-South-London’s self-styled “darkwave duchess” Abra brought her deep and meaningful beats to the darkness of a tent in the mid-afternoon and, while still a virtual unknown, showed why she’s already played last year’s Pitchfork Paris festival and at New York Fashion Week. This blender of styles taps into ‘80s synth pop and the rap of her contemporaries, and emerges with something entirely of her own. Given a full stage set-up and a whole album to play with, and with an audience that knows her better, it’s easy to see her star rising, while elsewhere, sidling and insidious, Is This What You Wanted? heralds HMLTD’s arrival. Like some new New Romantics looking for the HDTV sound, they’re as aggressively arresting aurally as visually, with frontman Henry Spychalski prowling in lurid green while the band – looking like extras from De Palma’s outré schlock-opera Phantom Of The Paradise – flip from surfy trash to industrial grind (To The Door), or from glammy stomp to Public Image Ltd fed through a ZX Spectrum emulator (Music!).  They look, and sound, like Proper Popstars, and could be your new favourite band.

Back at the Shacklewell Arms stage, Sydney’s Julia Jacklin and her band quietly stun half the crowd, while providing a nice background for the remainder to chat over. Warmly country-tinged, her set peaks with a solo Don’t Let The Kids Win, capturing the hearts and minds of anyone who’ll listen (“I’ve got a feeling, that this won’t ever change/We’re gonna keep on getting older, it’s gonna keep on feeling strange”) before the band return for a thundering Coming Of Age. Forest Swords has returned after an extended period away with a fresh, sample-focused album but today’s set on the Resident Advisor stage draws equally on his earlier sound. Processed guitar lines, clashing beats and distressed electronics all combine to form an esoteric, enveloping experience.

Outside, Death Grips provide one of the most intense and fiercest experiences of the day with their brilliantly uncompromisingly mix of rap and noise. Frontman MC Ride prowls the stage bare-chested, screaming his raw lyrics like his life depends on it while his accomplices provide suitably primal contributions from behind banks of synths and drums. Steam rises from the visibly thrilled and energised crowd. It’s a captivating spectacle. Over at the Moth Club stage, London-born Ahmed Gallab – better known as the Brooklyn-based Sinkane – and his band – particularly Elenna Canlas’ keyboard wizardry and Jonathan Lam on effects-laden guitar – are nothing short of a total joy. From the lithe, dubby New Name and early favourite U’Huh to the end, they throw Sly Stone, William Onyeabor, punk-funk smarts and perhaps a hint of Santana into a blender and the crowd – hugging, laughing, dancing – drink it up. It’s one of the smaller tents and, for the duration, it’s awash with convivial colour.

“Anyway, fuck dancing; let’s get back to the sad songs,” Aidan Moffat remarks dryly after Don’t Ask Me To Dance. Sexual misdemeanours, pathos, anger and tedium – common Arab Strap lyrical themes – are all present today, but musically their set focuses more on the louder and dynamic moments found in the later period of their career, like Stink and Fucking Little Bastards. Here We Go meanwhile is brilliantly miserable and The First Big Weekend remains a celebratory closer. Some sweary, anti-Brexit comments make us love Aidan even more. In just the sort of booking which marks Field Day out as London’s summer festival for the discerning music fan, with Silver Apples here was the chance to see a bona fide living legend in a tent in the middle of an afternoon. Now a solo concern, Simeon started this little operation before most of today’s audience were born, and this current revival has been touring the globe for over a decade. Today it’s easy to see why the likes of LCD Soundsystem’s James Murphy and Portishead – whose lynchpin Geoff Barrow also plays today with his other band BEAK> – count themselves as fans; looking like a psychedelic vision with his homemade synth and battered hat, Simeon is a man beamed across time with a message, and that message is to move that body.

Flying Lotus simply does what he does best:  effortlessly join the dots between electronica, jazz and psychedelia in truly kaleidoscopic fashion. Live, it’s even more hard-hitting, dense and punchier than on record. He threads together tracks from behind a screen of suitably mind-expanding visuals, today’s turbo-charged, frenetic set largely drawing from last album You’re Dead. The multi-syllabic, seven-headed King Gizzard And The Lizard Wizard are next, quickly turning the Shacklewell Arms tent into a maelstrom of flailing limbs with the heads-down cosmic punk of Rattlesnake. Two new albums into a promised five for this year, two further songs follow from the Eastern-tinged Flying Microtonal Banana – named for Stu Mackenzie’s extra-fretted yellow guitar –  before a lengthy Altered Beast from the upcoming, superb Murder Of The Universe. Refusing to take themselves at all seriously, their set is a blast – with jazzy guitar and bass duelling and breakneck rolls from their two (!) drummers – and the crowd lap it up.

Despite the size of the enormous Barn stage, to which even ‘hangar-like’ threatens to do a disservice, inside it’s a crush-course for the ravers at the first UK appearance of Aphex Twin in five years, with barely room to fill your lungs let alone move. (“Let’s go, this isn’t fun”, we overhear at least once.)  Taking in Plastician, Squarepusher and a few cuts from Richard James’ other aliases (Caustic Window, Polygon Window), twisted, warped techno and drum and bass at this scale, and bone-shaking volume, make for a relentless, frequently awesome spectacle (as long as you didn’t just come here to dance). There’s a breathtaking laser show and, on giant screens, faces in the crowd are kaleidoscopically distorted, before James’ own gurning mug floats over a rogues’ gallery – from David Dickinson to Pat Sharp, from Farage and Hopkins to Mr Blobby – their faces like folded banknotes.

Aphex Twin’s head-to-head with Slowdive was one of the worst clashes of a busy day’s scheduling. While the two acts could scarcely be more different, both appearances were big news. In Slowdive’s case this was their first UK festival date since releasing their first new album in 22 years, and at a festival which managed only the puniest of volume levels in its earlier years. But as with their other appearances since reforming, however, tonight showcased a band well at ease with themselves, their music, and what it has come to mean to people who missed most of it first time round. The sound is decent too; Alison and Souvlaki Space Station were amongst the aged yet timeless songs sounding completely at home in a set justifiably tilted proudly at the new material. Slomo, Sugar For The Pill and in particular the raw guitar of Star Roving already sound like old friends. Rachel Goswell, lately bolstered by a stint fronting supergroup Minor Victories, is the centre stage focus, with Neil Halstead blasting guitar across the stage from her left. Their reunion story has been one of the musical joys of the decade, and their set closes Field Day 2017 with one of its most memorable highlights. It’s safe to say we’ll be back to do it all over again next year, rain or shine.