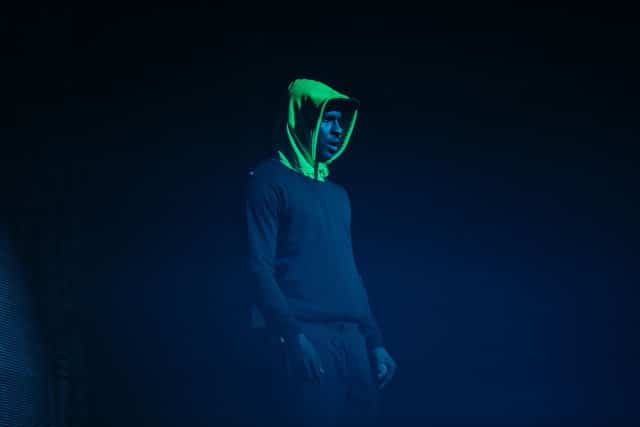 Established in the peak-festival mid-noughties at east London’s Victoria Park, Field Day has latterly undergone something of a nomadic journey in search of a home. In 2018, having been pushed out by the big-bucks All Points East, a hop-skip over the Thames to south London’s Brockwell Park ensured the two-day event’s continuation, with the festival beginning a musical reorientation of sorts along the way.

The 2018 event saw a definite movement to jazz, hip hop, soul and R&B, and this year’s programme follows suit to an extent, although it was still possible to detect signs of Field Days of yesteryear. But it’s on the move again, this time to north London’s repurposed brownfield industrial site the Drumsheds. Round the back of an Ikea there’s a mix of outside stages and three huge warehouses, one still replete with British Oxygen Company branding, and a greater focus on electronica has been ordered to fill these. The resulting programme is a festival which, given the site size, at times feels like two curiously disconnected halves.

By opening time on Friday, ominously wet and windy weather is blamed by the organisers for the site still being shut, necessitating queues to get in, and the cancellation of several sets right from the off, not least Femi Kuti, Jessica Winter and Kojey Radical, while Pip Blom and Boy Azooga play their sets to no audience. A late sign-off for the main stage meant delays in opening the warehouse venues too. So far, so difficult.

Just as those patiently waiting to enter begin to ponder whether the entire event might be in doubt, the indoor spaces are opened and Charlotte Adigéry takes to the stage. She impresses with her sharp electro-influenced R&B sounds and has a natural, confident stage presence and the songs to back it up. Her set also provides the first experience of the stunning sound system inside the vast Printworks warehouse. A powerful, rich sound, it just gets better over the whole weekend. Kelly Lee Owens takes full advantage of it too, her richly textured ambient morphing into propulsive techno and back. 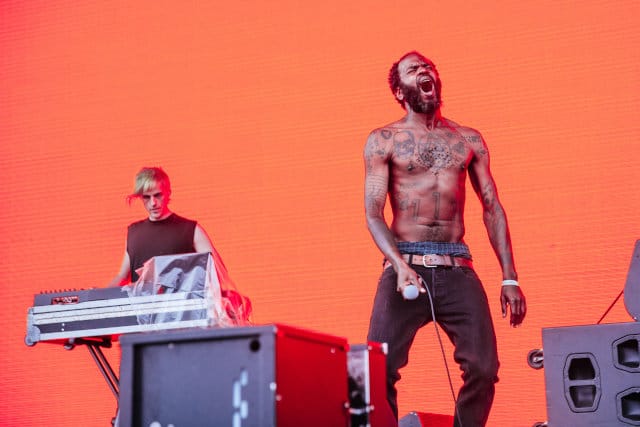 With ample bar provision and a decent range of food options open around the site’s periphery, slowly the rest of the site comes to life. Homeshake open the pebble-fronted outdoor main stage with their nuanced, electronic white soul while upcoming London guitar outfit Crows deliver a powerful, raw set in the confines of Dr Martens Boot Room that suggests they could soon be following in the footsteps of the likes of IDLES and DC Fontaines. Later, Marie Davidson’s targeted, panoramic techno sounds fantastic in the Bulldog Gin Yard, an enclosed outdoor space that uses shipping containers to provide elevated viewpoints, and Actress makes excellent use of the Printworks warehouse’s sound and lighting to draw in a crowd to his singularly twisted dance regime of a set.

Mahalia continues the diverse musical feel with summery, highly listenable R&B-flavoured pop. She has a likeable girl-next-door quality and, as people dance and the sun comes out, the earlier worries are slowly replaced by positive, feelgood vibes. Earl Sweatshirt maintains them with his loosely assembled, casually imparted hip hop.

Back indoors at the smaller of the two warehouse stages, Julia Holter eventually triumphs over technical troubles to transport us to an altogether different place with selections from last year’s beguiling Aviary album: “I’m enjoying your presence in this shed,” she notes. Deerhunter are today’s guitar headliners and songs from latest album Why Hasn’t Everything Disappeared hit the mark in the same space, suggesting that over the first day it is those acts with a vocal focus that fare better than artists ensconced behind laptops, even if the sound quality isn’t always as precise as that found in the Printworks venue.

Back on the main stage Death Grips confirm they’re one of the best festival bands in existence with an inflammatory, thrillingly physical set. They have an inextinguishable energy and stark directness that few can match. Later, Jungle impress with their updated, melodic take on classic soul. They are undoubtedly the smoothest act on display today and songs from last year’s For Ever album provide some hugely crowd-pleasing moments while also converting newcomers to their sound. Modeselektor meanwhile are attracting electroheads in quantities for their live set (they’ll return in a separately ticketed late night programme with a DJ set for good measure), with the festival split down the middle between dance vibes indoors on the one hand and summery R&B and soul at the blustery main stage. 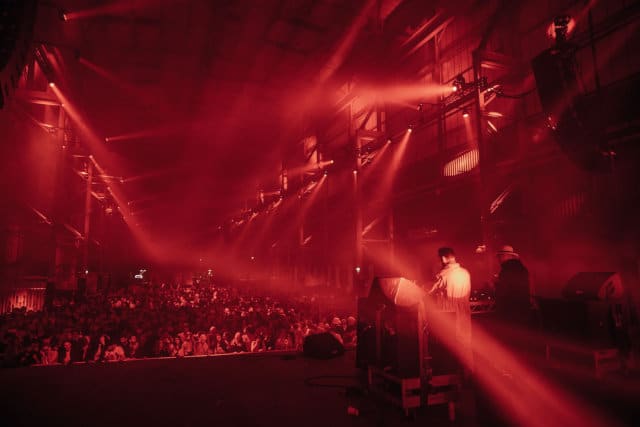 It is here that local boy Skepta quickly proves himself an inspired choice for headliner. Tracks from Ignorance Is Bliss are delivered with precision and confrontational power. “Been living my life as a kingpin, I’m calm with the heat in the kitchen” he raps, not inappropriately, on Bullet From A Gun while boasting on Animal Instinct about how he “should take a selfie and go and hang it in the Louvre”. In short he’s an assured, impactful performer, emphatically rising to the occasion. If that isn’t enough he brings the likes of J Hus, Boy Better Know and Jme on stage to add extra weight. It Ain’t Safe is accompanied by fireworks from the stage and Love Me Not, with its sample of Murder On The Dancefloor by Sophie Ellis-Bextor feels like one of the truly connective moments of the festival.

Saturday’s programme confirms that when Field Day takes a vast warehouse and asks someone to play for what seems like an age, things work well. Courtesy and John Talabot are both given 90 mins to fill on the Printworks stage, and both manage to make the afternoon feel like the end of the night – in the good, euphoric sense, rather than the miserable, abhorrent, pit o’despair sense – the latter by building something deep and hypnotic, and the former by charting a propellent path through early ‘90s rave sirens to a juddering fist-in-the-air climax, accompanied by a set of graphics in thrall to the magic and wonder of spiky massage balls.

But things seem curiously out of kilter. In the smaller warehouse, Red Axes produce pummelling beats while standing around looking awkwardly at each other, while on the main stage The Mauskovic Dance Band rock vive le resistance chic and chuck all manner of rhythms, lolloping basslines and choppy guitars at the wall only to find absolutely nothing sticks. Sinkane for his trouble plays My Favourite Song to a crowd who seem hell bent on ensuring that he truly understands that while it might be his favourite song, it sure as shit ain’t theirs. As with the opening day, the by turns blustery and drizzly weather in no way helps. 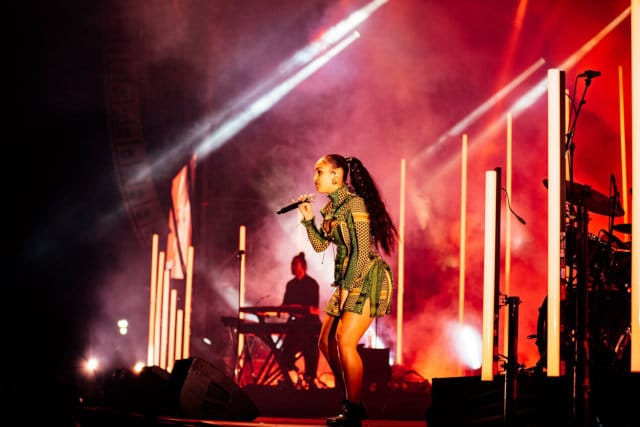 Stuffed into the tiny Dr Martens Boot Room stage, which has the added benefit of being undercover, Marika Hackman has a crowd willing her on. Her solo acoustic beginnings have long since given way to a full band set-up, and here her four-piece operation easily hold attention despite the competing bass rumbles from the main stage. There, Pusha T has strolled on after his DJ has run through the entire playback of cliched crowd rousing activities (honestly, is there an emptier threat than claiming artist X will not come on unless people scream louder). He rattles through most of his last album Daytona, gives us a snippet of Kanye’s Runaway and a glimpse of Clipse’s Grindin’, all with unhurried skill and unbounded charisma.

The smaller warehouse finds south London grime MC Flohio being filmed on a set constructed in the middle of the room. Scaffold poles are tied into a square that resembles an unyielding boxing ring, and Flohio and her DJ hold forth while a stills photographer competes for space with a rival sporting a larger filming contraption. Astonishingly, nobody collides with anybody else, equipment remains somehow unsmashed, and when she leaps onto the bars and eyeballs the crowd during quickfire delivery, it’s plain to see why filming her makes much sense.

JPEGMAFIA’s set in the same space is no less extraordinary. Throwing himself around the square space, writhing and screaming over his backing tracks, the crowd swell and mosh around him. But the ‘ring’ fills with more and more concerned looking security personnel, seemingly trying to hold the barriers together by hand. At one point it looks like they’re going to stop everything. It’s all very confused. Peggy, however, is utterly fantastic. Unhinged, chaotic and far and away the most memorable performance of the weekend. The set has vanished by the time Octavian appears in the same room. 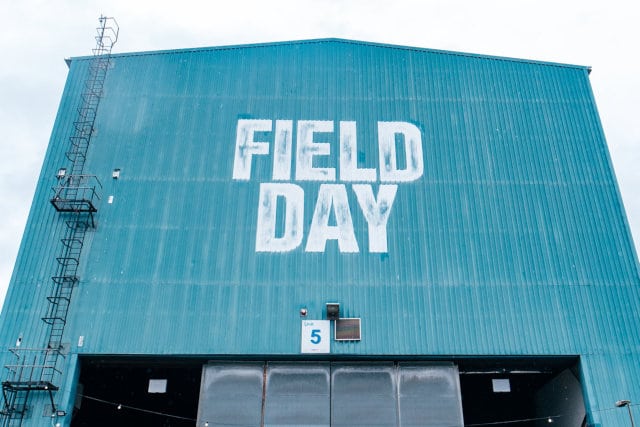