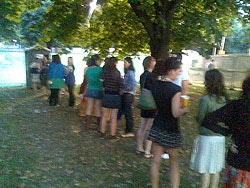 The human mind is capable of great things. It put a man on the moon, pioneered gene therapy and can be measured in the fields of art, literature and the great social thinkers.

Let’s take a moment to celebrate the fact that, when applied, the human mind is our most prized possession. Which makes it all the more galling that the simple things, which don’t require an understanding of anything more than modern human behaviour, seem alien to some people. Yes we’re glaring at you, Field Day powers-that-be.

Your festival, on paper, was one of the brightest festival prospects for the summer, spanning the creme of the crop in folk, electro, indie and alternative music. But your ambitious first outing will be remembered largely for hour-long bar queues, even longer toilet queues and (we’re being nice here) timid sound levels.

It’s not a major issue for musicOMH. We’re pretty easy going. We hadn’t paid for entry. We were happy to drink water, eat homemade cake and tarts (until they ran out, at about 3pm) and take in as much music as our legs would carry us around to see. If the real need to relieve one’s bladder impinged, we could just do what the dogs outside the arena were doing, up against the nearest fence.

But what about Joe and Josephine Public, who had paid 22.50 and been prevented from taking in their own food and water bottles? Wouldn’t it be reasonable to expect the basic comforts a festival in a 21st century western capital should have to offer?

Hell no. You, sirs and madams, get for your good money two bars staffed by 16 people serving 10,000 punters, a few banks of toilets and one water refill point. And if you, girls, wish to pee, well, squat down in the field and hope nobody’s looking.

Here’s Field Day’s actual response: “Hands up, we got swamped. Sorry, it was our first festival and the queues were clearly too big.”

“We did not oversell the event and the amount of all the toilets and the bars were approved by the council. However, we clearly did not anticipate the demands on the bars from a Field Day crowd and there were clearly nowhere near enough. Next year we will be at least doubling both the bars and the toilets.”

“We feel very disappointed about these problems and we hope that it did not affect your enjoyment of the music and other activities too much.

“Thank you once again for attending the first Field Day, we will improve.”

Fair enough, but this really didn’t have to happen. On a hot day, drinks and toilets are not optional extras. They’re integral to any festival, and they should have been integral to this. That they were not was extraordinary, especially as the promoters in charge are hardly new to organising live events.

With the sun beating down and those bar queues starting to form, it’s not the best time to see Fridge‘s first proper show in six years. The quartet, featuring Kieran Hebden and Adem, bring delicate post-rock melodies similar to Explosions In The Sky. The crowd appear largely indifferent and chatter soon ensues. Given the low sound levels this is very discouraging, but for the few faithful at front centre, this was one of the day’s highlights.

1990s gigs have a reputation for mayhem. There is nothing of the sort on the Field Day main stage. So the alcohol amnesty effect claims its first victim. No matter. They turn in a set that is as festival friendly as a 2pm set will ever be. See You At the Lights can cater for that in itself, and the sleaze beast that is You’re Supposed To Be My Friend.

The Adventures in the Beetroot Field tent has a fair gathering for Sweden’s Concretes. Their fidgety indie synth pop garnered some light head bobbing, but the heat and lacklustre PA left both band and crowd somewhat muted.

Not so for Chromeo, who had the Bugged Out Tent rammed for their edgy funk disco. By this point we had achieved the unthinkable and purchased an alcoholic beverage (vis a vis making friends, learning sign language, and reading a collection of short stories). The festival also seemed to have settled into a flow, of sorts (and an estuary of human excrement in some parts).

There were smiles all round as we danced outside to Fancy Footwork, and it was a moment which reminded you that good music and a good atmosphere doesn’t need to be preceded by getting sloshed.

Kid Harpoon and his backing band The Powers That Be would ace a Levellers 101 exam. With a voice that could pass as that of Mark Chadwick and a sound somewhere on the Larrikin Love meets Gogol Bordello scale, the Kentish scamp charmed with a set that started with Manhattan To Berlin, brought in more people for Flowers By The Shore and even featured Florence of Florence And The Machine soon-to-be fame for one track. With a wistful ode to a milkmaid, of all things, the Kid all but made up for the event’s shambolic organisation in half an hour. A pretty butterfly flapped lazily around the tent, alighting on heads only to take flutter again. He ends with River Song and the audience want more. He made new fans today.

Foals‘ early main stage set seems like a bill mix-up. Their frenetic and tightly honed sound has been responsible for many a moshpit up and down the land already, but the crowd are not playing ball. Yannis plays at 90 degrees to his onlookers, rarely pausing for breath in a set chock full of memorable hooks and rabble-rousing cymbals. But with the exception of two people in worlds quite of their own, the audience watch stock-still, even during current single Mathletics, which is wheeled out second to last. Maybe they were already queued out for the day. Whatever, Foals deserved a better reception.

The Myspace routemaster parked between the Beetroot and Homefires stages saw Erol Alkan grace it earlier. Now Justice are onboard DJing for a handful of lucky passengers. The bus shakes like it’s a Snoop Dog video shoot as punters clamoured to get on. After a few moments of envy we told ourselves that we were too tall to party, opting for Mercury nominated Bat For Lashes.

As the sun began its descent over the Victoria Park tree line, Natasha Khan and co brought their otherworldly folk for a mesmerising set of the day. The tribal rhythms of Trophy and creepy sprawl of What’s A Girl To Do had a huge crowd stunned in silence.

Over at the main stage, Battles were doing their best to be heard and to hear themselves on the Fisher Price sound system. Their just-about-perfect fusion of electronica and guitars should have ruled the day. Instead they left the impression that they need to be seen somewhere they could be heard properly and for longer. “Was that three songs they played?” asked a girl nearby. Whatever, it was over way too soon. It was worse for Archie Bronson Outfit at the Homefires stage – they suffered a power cut. “See you at a proper gig,” muttered Sam The Cardinal ruefully as the blues rockers departed for an early shower.

Late Of The Pier have a merciful sound man in the Beetroot tent who has the levels turned up for their extraterrestrial indietronica. It’s disjointed in a manner that stirs you, but carries enough new wave (or rave if we’re being PC) sensibility that the likes of Klaxons and Shy Child have.

Gruff Rhys divides his time between promoting his solo album and gearing up for the new record by his band, the Super Furry Animals. For a melancholic, mainly acoustic act his billing is quite late on the Homefires stage, which by virtue of being stuck inexplicably in a corner is mobbed by people trying and failing to get a view of Wales’ national treasure. His first song ends with what sounds like a power cut. His next song is “about monotony”. By the soundstage, indifferent drunks chatter loudly. Gruff played to devotees this evening up to the point when he became the first act of the day (that we saw) to pay tribute to the late Tony Wilson. Later still he mumbles something and announces: “We’re pissed.” Lucky you, Gruff. Glad you could get to a bar.

Elsewhere, after a lengthy wait, Liars front man Angus Andrew struts on from stage left in a white suit and sunglasses and launches into Be Quiet Mt Heart Attack. Unlike most of today’s performances, the band are perfectly audible and proceed to play one of the best sets of the festival.

With a set list mixing track from the last two records and some tasters from their upcoming eponymous release, Liars have come a long way from their days of disco punk, when they first emerged six years ago. Low vocals in Pure Unveil sets a slight lull but all is forgiven by a ferocious finale of Broken Witch, the crowd joining in with the closing chant of “Blood! Blood! Blood!”

The almighty crucifix and light rig checks suggest Justice are about to inject the power of the good Lord upon us. Genesis signals the intent, its dramatic build up dropping into its razor cuts of filth and funk.

Something’s not quite right though. Their mixing is off, with silences and breaks when you aren’t expecting them. A more subdued ballad-rework of Dance seemed to sum up the laclustre nature of the set. Things picked up a little for the ever inducive Phantom. Cloaked in darkness with strobes here and there, de Rosnay and Auge looked a million miles from what they’re capable of.

The PA wasn’t generous to them and lots of chatter about Daft Punk went on around our ears. There was scarcely enough time to air We Are You Friends before the stage manager visibly ordered them to wind down curfew, forcing a false stop and a rushed dive into Waters of Nazareth.

Festivals are about more than just the music, and as an experience in one, at Field Day you felt rushed off your feet with the sheer number of bands crammed into brief slots.

It’s hard to swallow explanations for the queues debacle, as miscalculating demand. Field Day had the numbers, they knew their capacity, they knew their sales volumes, and they knew it had sold out a fortnight before the event.

That said, there was plenty of room to move about, no momentous walks between stages, and the arena area remained pretty clean in comparison to the mess at The 1234 last week.

From a music point of view Field Day did deliver. Despite the problems with sound levels, there was a fantastic array of music, and it was that which just about managed to shine through. That the bands and their sets were not the main talking point of the day says it all.