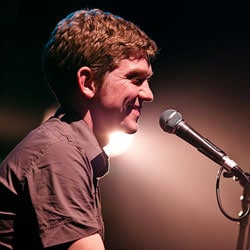 Despite appearances and their nice-chap-down-the-pub demeanour, the Brewis brothers are stealthy rebels. Underneath the nice, neat round-neck t-shirts and sensible, functional haircuts, they’re making reckless decisions that must try the patience of the industry bods around them.

From their abandonment of the more upbeat, commercially favourable sound that briefly emerged early in their career, to their decision to temporarily go their separate ways on the eve of a huge arena tour supporting Snow Patrol, Field Music seem determined to always be “that band that ought to be massive”.

Despite their stubborn refusal to do anything that might earn them a bit of attention, tonight’s show is more than sold out, and it’s an irony not lost on Peter who, when referencing their second album, Tones Of Town, gently laughs at the cheers from the audience and quips: “That’s everyone who bought the album, then.”

Field Music might not be a household name but their four albums – and two as School Of Language and The Week That Was – have earned them a loyal following, and their latest, Plumb, is already a firm favourite. It was released just 11 days ago but it’s these songs that cut through the sweaty, rammed Thames-side venue tonight. They begin with Plumb’s opener, Start the Day Right – a twinkling, intimate intro that eventually gives way to an onslaught of guitars and slabs of crushing drums. It sets the tone for the next hour, and the occasional tit bit thrown in from their earlier back catalogue gets lost amongst the heavier, more chaotic sounds of latter day Field Music. In fact, it feels like they’re playing them to allow themselves a rest from the bonkers prog rock and post punk synths that dominate 2010’s Field Music (Measure) and particularly the week-old Plumb, which dominates tonight’s setlist.

As consummate professionals who take their music very seriously, tonight’s a near-perfect replica of the band’s records…just a bit more so. The angular, jutting, almost industrial sounds take on a new depth live, as the brothers flit between drums – and, with band mates Kev Dosdale and Ian Black – guitar and keys. The crunching guitars of Sorry Again Mate are more menacing, the funk of A New Town more bassy, and the staccato strumming of (I Keep Thinking About) A New Thing more irresistible.

The vocal prowess of Field Music, so often overlooked, is showcased during the a capella How Many More Times; a gorgeously constructed, short blast of harmonies. Elsewhere, Who’ll Pay The Bills is a Brewis lyrical masterclass, full of kitchen sink musings.

Things are brought to an abrupt end; it’s Friday night, we’re in a students’ union, there’s a club to get on with – and as we’re shuffling out, the restless beat of Just Like Everyone Else still rolling through our ears, you can’t help thinking… that band ought to be massive.