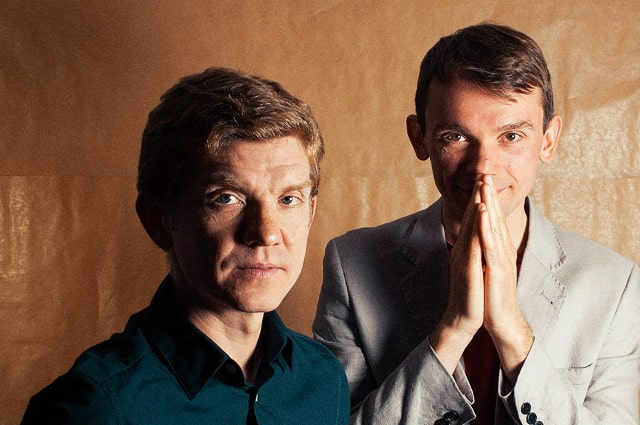 “The Brewis brothers are their own force, melting hearts, raising eyebrows and tapping feet in equal measure.”

The reason? Field Music are in town, and brothers David and Peter Brewis have decided to push the boat out for the listening pleasure of their devoted fans. They are on the second of three dates, a mini tour of the UK –sensibly spaced out so their duties as new fathers can be incorporated. Shepherd’s Bush is the meat in a sandwich framed by Gateshead and Manchester.

Before they appear, we have the opportunity to catch the strident music of Manitoban singer songwriter Haley Bonar. Her penetrating voice is complemented by rolling drums on the assurance of I Can Change, one of several choice cuts from the Impossible Dream album. Stupid Face and Kismet Kill find her in resilient form, confidently communicating with the crowd in songs notable for their directness.

Field Music are initially a bit more elusive, but the cover soon slips. For the occasion they have decided to give equal billing to recent album Commontime and a bevy of past favourites, taking the opportunity to extend the comparatively lush instrumentation to their past oeuvre. To that end the stage groans under the weight of a mini orchestra, with the Aurora Strings in relative darkness stage left, saxophone and trumpet stage right, and in the middle the body of the band themselves, including excellent vocalist and keyboard player Liz Corney.

As is their wont the brothers alternate vocal and percussive duties, and are soon enjoying their freedom. As The Noisy Days Are Over makes its presence felt two songs in, a free and breezy saxophone solo from Pete Fraser blows away the cobwebs. This song proves the band can turn out a mean groove, further evidenced by Let’s Write A Book, while later on an unexpected drum machine wig out reeks of Manchester.

The set ebbs and flows, with many high points, but few are more effective than the stripped back and slightly slower string quartet arrangement of She Can Do What She Wants. Here the quartet offers subtle percussion as well as poise and elegance, tapping in to the classical string compositions of Ravel and even Vaughan Williams for inspiration.

Such inventive scoring can take you a long way in pop music. The Beatles were the primary example of course, but not enough bands take advantage of the ‘classical’ instruments available to them. Field Music are the exception, allowing their players relatively free rein. Each arrangement brings the most not just from their songs but from the instruments themselves, a cut above your average piece for strings. The chamber arrangement of the soft hearted The Morning Is Waiting For You proves the point.

The band’s exultant set continues to shine, flitting between recast hits and the unexpected depths of double album Measure, which the brothers concede “Might have been missed. Still, it’s good value!”

Their influences crop up from time to time, Talking Heads and Orange Juice providing notable reference points, but the brothers are their own force, melting hearts, raising eyebrows and tapping feet in equal measure. Their gig leaves a warm glow on the assembled throng, who leave with the sort of smiles that stay for an evening. Mission accomplished.