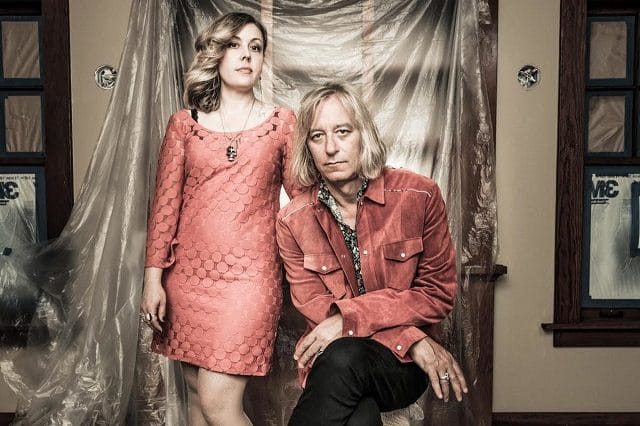 Musical terminology can be a troublesome thing at times. ‘Collaboration’ is seen as a positive force to be applauded yet there’s something about the term ‘supergroup’ that seems less worthy, almost inviting suspicion and scepticism. Filthy Friends are most definitely a supergroup (and proudly so) but on the strength of tonight’s show at the Garage it’s clear that no doubts or negatives can be levelled at them. They play rock music as if they are its biggest fans, enjoying every moment and revelling in the simple joy of playing in front of an audience.

Attention is naturally drawn towards Corin Tucker (of Sleater-Kinney) and Peter Buck (of R.E.M.) but Kurt Bloch, Scott McCaughey (both of The Young Fresh Fellows and more) and drummer Linda Pitmon all play equally important roles. Pitmon in particular stands out as a drummer of note and Bloch’s guitar and McCaughey’s bass contributions hold everything together nicely.

Second album Emerald Valley was released earlier this year and largely follows in the footsteps of Invitation their 2017 debut. Tonight sees both brought to life in a dazzling performance. Support comes from She Makes War (Bristol based musician Laura Kidd) and she weaves together guitar, ukelele, vocal loops, tiny cymbals, Tanya Donelly anecdotes and songs about weird stalkerish men to charming effect.

The music of Filthy Friends confidently stands up on its own but it’s undeniable that there’s also an added thrill in seeing Tucker and Buck up close in such a small venue. They open with November Man, serrated guitars combining with Tucker’s strident vocals. Pipeline soon follows with its open, pronounced guitar line and No Forgotten Son has a real urgency and drive as Tucker demands to know “why no mercy, why no love?”. Her vocals may not have some of the ferocious power she discharges on Sleater-Kinney albums but they’re still in possession of a steely inner strength and focused determination. This show comes towards the end of a short tour during which new Sleater-Kinney material is shared, and immediately acclaimed, such is their current standing. Tucker is clearly in the middle of a highly productive period after some time away from the limelight.

The appearance of Peter Buck is arguably even more striking. He’s on fine form, coaxing melodic lines from his guitar and nimble moves from his body. “How you doing Peter?” enquires someone from the crowd. “Pretty good” he quietly mouths back with a shrug of the shoulders. He’s in relaxed mood, something in evidence after the show as he casually strolls through the crowd with the other band members talking to fans, signing records and posing for photographs. From his perspective Only Lovers Are Broken is a highlight, the opening guitar riff recalling classic early R.E.M., while Tucker delivers a cuttingly emotive vocal on top.

Angels almost has a stadium rock feel, the guitars momentarily turned down resulting in a highly connective moment. The opening guitars of Windmill meanwhile recall Marquee Moon era Television, One Flew East is introduced as “a disco song about complicated political feelings” and Makers brings the main set to a close with melodic stomp.

The encore begins with the beautifully vulnerable Hey Lacey, Tucker poignantly pleading “pull me closer than before”. Any Kind Of Crowd reverts back to melodic surge and they finish with Last Chance Country. It might not be as life-changing as the music of Tucker and Buck’s other bands (how could it be?) but it’s still a resolutely powerful showing, proving that no matter how many times rock music is written off it keeps coming back just as strong.