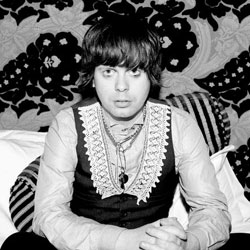 Fionn Regan’s debut album, The End Of History, was nominated for the 2007 Mercury Music Prize. Let’s get the tiresome predictability of that appearing in this review out of the way, shall we? It’s probably fair to assume that Regan is a little fed up with his “Mercury-nominated” prefix.

OK, it’s not really all that bad. Adulation, exposure, decoration and heaps offree marketing. What more does a recording artist possibly need to succeed?

Of course, things are never as simple as all that. Every Mercury nominee has to shoulder at least two burdens. Firstly, there are ridiculously high levels of post-Mercury expectation from lots of people who aren’t necessarilywhat could be called genuine fans; and secondly, there’s a high chance of being forever sonically tagged to past achievements.

So, a night of tender, Damien Rice folk from Mercury-nominated Irish guy. Lovely! We wait and expect GREAT things. Joking aside, the clutch of expectation inside Manchester’s best small venue The Deaf Institute is, thankfully, of the well-cultured kind, and has little to do with the fact this guy was Nominated.

As it happens, The End Of History is a brilliantly constructed folk record that glows with amazing self-assurance for a debut album. That same sense of confidence radiates from tonight’s performance; something made even more impressive by the number of new tracks from its upcoming sequel, The Shadow Of An Empire, included in the set.

The amount of people on stage before Regan even makes an appearance tells the crowd as much as it needs to know about the new material. Powered by three guitars (one acoustic, one electric and one slide electric), new album opener Coat Hook confidently bellows around the space and is a far cry from the plaintive one-man-and-his-guitar folk that so characterised the first album. Regan appears to have Gone Electric, and with some style.

Whether it’s simply the quality of the venue’s acoustics or the sweet sound of Mercury-funded success, all of Regan’s new plugged-in material reverberates with a deliciously creamy tone. Many will name-check Bob Dylan and Neil Young, and while these are undoubted influences, Regan seems to be shooting in the bluesy folk-rock and alt-country direction of Ryan Adams. New tracks Protection Racket and Violent Demeanour possess the same spikiness and volatility of later Adams and later Whiskeytown.

Like Ryan Adams on one if his less good days, the floppy-haired Regan doesn’t say an awful lot, but he’s not remotely tempestuous; just a little shy, perhaps. A member of the audience sarcastically praises the singer for his unwieldy black bob. “It’s a ‘recession cut'” replies Regan. “I do the front and my girlfriend does the back.”

Happily, The night isn’t all about the new stuff. Regan plays plenty of favourites from the first album, appeasing an audience that is clearly taken aback by the post-Mercury change of direction. The End Of History’s elegiac highlights – Hey Rabbit, Hunters Map and The Underwood Typewriter – trap the audience in a web of gentle melody and hazy poetry. If only every street busker was this good.

Embracing the busking undertone, an excitable member of the audience randomly requests a Donny Osmond number next. “He’s on tour on with us but he’s disgusted by the (Deaf Institute’s garish William Morris-style) wallpaper, so he’s not coming out,” retorts the playful and softly-spoken Irishman.

For the encore, the previously acoustic-only Regan returns to the stage armed with his own electric guitar for the decidedly non-folk new track Lord Help My Poor Soul – a soulful and voluminous ode to Edgar Allen Poe. Having clearly conquered folk, Regan has ably turned his hand to more forceful arts.

In an interview conducted around the time of The End Of History’s initial success, Regan spoke of his new material as having a “wild mercury violent sound, like the chest, the ribcage, is ripped open.” After tonight’s fiery performance, it seems unlikely that Regan will need the Mercury effect in future.