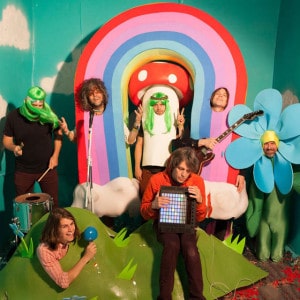 Imagine someone who went to a Flaming Lips concert without knowing what their live show is like. It’s unlikely to be anything they were ever expecting, even if they’ve watched all the gig videos on YouTube in anticipation. Nothing can quite prepare you for the visual, sonic onslaught that has long been their USP – marking them out as a truly unique tour-de-force.

For those who have been there and bought the t-shirt (which seems to be a reasonable proportion of the Brixton contingent), this won’t be quite like the first time. However, the overwhelming power of their performances means that rounds two, three and on is just too tempting. Following on from their previous compelling and emotionally charged appearance in the capital to promote The Terror, Wayne Coyne and co are back, and evidently firing on all cylinders again. It’s a completely different, happier group to the one that played the Roundhouse, both in mood and in personnel. Despite the recent controversy surrounding Coyne’s decision to sack drummer Kliph Scurlock, which has turned into a rather bitter war of words with no party coming out of it well, all of these troubles are quickly forgotten as The Abandoned Hospital Ship opens the set.

The show begins quietly enough but it doesn’t last that way for long, with confetti canons, strobe lights and a bloody big racket backdropping Coyne’s constant goading of the fanatical crowd to cheer loudly. All the usual props associated with the Oklahoma outfit are in town. There are balloons, people dressed up as aliens and stars, and Coyne even has his own cube platform from which to preach to the masses. What follows is 100 minutes of colourful, unabashed joy punctuated with just the odd moment of sombre reflection.

Even though their most recent album, the sublime The Terror, is not given an extensive airing, the band do play its two strongest songs. In time, they might even be considered classics. Look…The Sun Is Rising sounds like a hymn from outer space – utterly prophetic and glitch-ridden – albeit with gloomy overtones. Then there’s Try To Explain, a heartbreaking tune with the chorus of a blackened and pulverised soul. These darker aspects of their setlist are a decent counter-balance to their more vibrant output – without killing their momentum.

Songs from Yoshimi Battles The Pink Robots and The Soft Bulletin spark the most fevered reactions. Feeling Yourself Disintegrate is made memorable thanks to a concluding Steve Drodz guitar solo that is Comfortably Numb-esque. The triumphant Yoshimi Battles The Pink Robots, Pt 1 and Race For The Prize are both greeted with unanimous roars of approval. Even when things get really proggy with In The Morning Of The Magicians, its cosmic groove is so atmospheric-sounding that it’s easily enough to make people forget about the sticky, sloped floor of Brixton Academy that is hurting their feet.

Showcasing songs from across as much of their back catalogue as time allows, this show is the joyous experience that last year’s lacked. Whilst that concert was honest, heartfelt and extraordinarily cathartic, this is considerably more enjoyable, fun and crowd-pleasing. For all the spectacular theatre that they provide, the sheer volume of the singalong to Do You Realize?? is enough proof that there’s more to their presence on the live circuit than surface.

There’s one more surprise in the form of a cover of The Beatles‘ Lucy In The Sky With Diamonds. It’s a stunning, bombastic preview of their full LP tribute to Sgt Pepper’s Lonely Hearts Club Band that ends the evening on a high (ba-doom tish), leaving older fans immensely satisfied and newcomers collectively wowed.