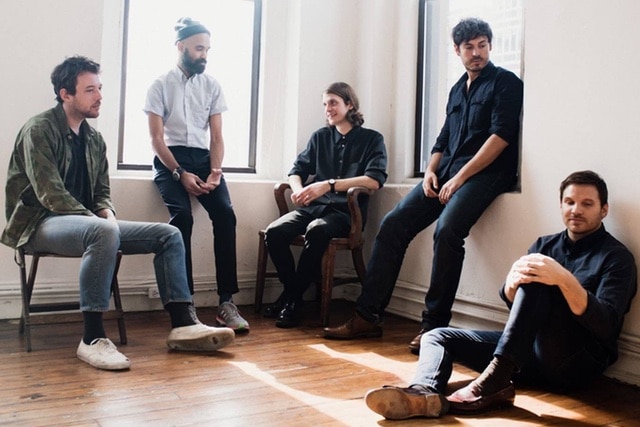 Crack-Up, the long awaited third Fleet Foxes album is one of the under-the-radar, slow-burning successes of 2017. Finally released after a hiatus which saw frontman Robin Pecknold re-enrol in college and question the future of the band (and his desire to continue making music), it very much feels like an album that took six years to make. It is the sound of a band challenging themselves to create something fresh and new, while retaining their identity. Two sold-out dates at Brixton Academy showed the regard in which they are still held. The size of the venue (and its occasional sound problems) had given rise to some minor concerns on how well the fluid, airy nature of the new album may translate live in this space, but they were quickly forgotten.

The multi-part, co-joined song titles and recurring lyrics on the album provide evidence of a conscious decision to do things differently this time, backed up tonight by a wider collection of instruments featuring in their live show (the first 10 minutes sees Skyler Skjelset and Morgan Henderson play bowed guitar, tuba and flute). They open with I Am All That I Need / Arroyo Seco / Thumbprint Scar which has flitting, diversionary feel, restlessly laying down ideas before moving on and revisiting. It’s a theme they extend across their older material – songs are deliberately run into each other, cutting off any opportunity for extended applause. It may partially explain how early parts of the set receive a warm rather than rapturous reception. It’s admirably ambitious music however, brimming with ideas and recalling albums like Smile by The Beach Boys and Song Cycle by Van Dyke Parks. There may be no radical reinvention but there’s greater longevity, maturity and depth in these songs.

Battery Kinzie and White Winter Hymnal soon transport us back to earlier times, the former still enjoyably uncomplicated and the latter still the perfect marriage of simplicity and enchantment. The loose, celebratory Ragged Wood follows afterwards and elicits a suitably jubilant reaction from the crowd. The opaque, percussive textures of Mearcstapa and existentialist isolation of On Another Ocean (January / June) provide two of the most interesting moments on the new album, together forming its centre-ground and tonight they play a similar role in the live show. At time it feels like an expanded odyssey through sound with periodic reminders of how Pecknold’s vocals are still as clear as the purest running spring water. Fool’s Errand meanwhile shows what made them so lovable in the first place, blissfully wide-eyed and soaring. They run it directly into He Doesn’t Know Why to beautiful effect, new and old sitting alongside each other in harmonious fashion. Later The Shrine / An Argument shows they can go heavy and dark when a degree of contrast is required.

An anecdote from Pecknold about hearing The Beatles in a restaurant earlier in the day almost leads to an impromptu cover of Day Tripper but instead they play Third Of May / Ōdaigahara, one of the stand-out tracks from Crack-Up. Tonight, it evokes a scenic journey over gently undulating plains, Pecknold’s skybound vocals perfectly offset by just the right suggestion of rambunctiousness. Mykonos follows and offers the most thrilling, glorious moment of the night. The encore sees Pecknold return alone on stage later for an encore of Montezuma and Oliver James. The latter might have a touch of the campfire singalongs to it but the former is exquisite, proof of the emotional connections they are so capable of making.

That’s still one of their main strengths – they are a wonderfully open and embraceable proposition. Pecknold doesn’t seem to want to leave the stage at the end. It’s easier to understand why – he and his band have returned in better shape than ever before.