by Daniel Paton
published: 31 May 2011 in Live Music Reviews
Tweet 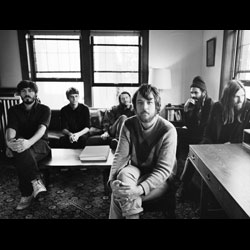 Something has happened in Fleet Foxes’ career trajectory since they last performed in the UK. They have, with gentle, almost unnoticed progress, become hugely popular and a major audience draw. Their second album, Helplessness Blues, has only been kept from topping the album charts by the omnipresent, unstoppable force that is Adele. Where initially Fleet Foxes seemed like something of a specialist proposition, mining the rich seam of American folk and psychedelia with which they grew up, they are suddenly bringing this warm nostalgia into the mainstream.

The audience at this first night of a sell out run of three shows at the Hammersmith Apollo are restless and excited. With constant whoops and screams, this sometimes felt more like a Take That gig, or an episode of The X Factor. That Fleet Foxes themselves are both unassuming and somewhat inarticulate, doing little to engage with the crowd, made the atmosphere seem all the more incongruous.

The other surprising factor is the sheer volume of this performance. It is certainly a huge surprise to come to a Fleet Foxes show and find it louder than a concert by AC/DC. This, unfortunately, constitutes more than a merely pedantic complaint. Much of the nuance in the music was lost due to excessive volume and a thin, tinny timbre of sound. For much of the show, the piano was simply inaudible, lost amidst the overpowering acoustic guitar strum. Whereas the recorded Fleet Foxes sound is warm and inviting, in this performance it often seemed too harsh and biting. The otherwise lovely Montezuma was ruined by a constant background feedback screech. Pecknold’s lyrics were rendered incomprehensible throughout, but this is perhaps not such a major issue when the band deal so much more in timbre and effect than in actual meaning.

Still, in spite of these problems, there was considerable evidence that Fleet Foxes have developed as musicians and writers. The comedy banter of previous shows was jettisoned in favour of concentrating solely on the music. As a result, the band managed to play a remarkably generous set incorporating all the key moments from both albums. The earlier material was performed with greater confidence and intensity, not least a resplendent Mykonos and a mesmerising take on Your Protector.

The band devoted the first third of the set to their new material, beginning in understated fashion with the gentle, haunting cascades. The rumbling insistence of songs such as Grown Oceans and Sim Sala Bim was further enhanced in this setting, with Josh Tillman’s drumming now more imposing and vibrant. He has assumed responsibility for the variety of textures and colours in the band’s music. Whilst some of this was undoubtedly lost due to the imperfect sound, it was also clear that Tillman has the ability to infuse the music with drama and energy.

The dense vocal harmonies, perhaps the most recognisable aspect of the group’s sound, are brilliantly executed throughout, and there is a sense that the group have a still developing sense of ambition and adventure. Much of the new material takes considerable risk with structure and form, sometimes also with content. Anyone in the audience not yet deeply familiar with the new work may well have been uncomfortably surprised by the sudden interjection of free jazz saxophone in the protracted The Shrine/An Argument. Whilst not every idea in this show worked, it’s great to see the band use their popularity as a means to further develop rather than to compromise and stay safe. They deserve more attention to detail and sensitivity in their sound mix.