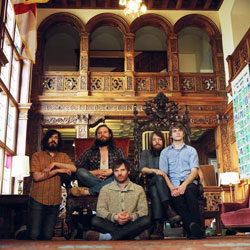 We all know the album’s great, we’ve seen them go down a storm on telly, we turn up the radio when they come on.

But Fleet Foxes are still relatively new to us here in Blighty. Perhaps this was why the audience of Shepherd’s Bush Empire didn’t seem too fussed when Josh Tillman opened for their second gig at the soon-to-be packed venue, later accompanied by a group of slightly odd and beardy looking musicians, who all seemed to be rather good at what they plucked and played.

Ah, it was actually Fleet Foxes, we all realised a little sheepishly.

Josh gave a great performance in a softer Ray LaMontagne way, but it was the choral tunes, anthemic countryness and magical Crosby, Stills & Nash style harmonies we were waiting for.

The five-piece members played and sang so effortlessly and their voices filled the Empire to the rafters without so much as a vocal quiver. The wonderful moments of a capella throughout the night – collectively and with singer Robin Pecknold going solo – were literally breathtaking. Scenes of snowy woodlands rustling with nesting larks filled the room.

Although Robin is the central voice of the Foxes, he is by no means a leader. The group couldn’t be tighter if they were chained together; every musician on stage played an integral part to creating this vast, heavenly sound. Josh, now on drums, created a beautiful ambiance with his soft, yet massive, percussion; a bowed guitar brought a weirdness and texture; the Rhodes and ukulele sat wonderfully among the Texan inspired and west coast rich melodies. And what looked like a young Dennis Wilson belted out understated and round bass lines.

The vision on stage was like a tardis – it almost seemed impossible that these five scrawny young men could produce this sound, a sound that hits you in the face. The crowd were awestruck, so much so that the silence between songs was eerie, for us and them. Yet it left plenty of opportunity for chats about the future of capitalism, buying a small country and a shout out to Noam Chomsky.

All the greats from the Foxes’ self-titled debut made it into the set, as well as those from the Sun Giant EP. Each was perfect in its own way – for showcasing Robin’s voice, gravely when quiet and unbelievable when he threw it out at an impeccable volume; for the intricate harmonies that can make grown men weep (and they did); and for the mix of feather softness like White Winter Hymnal and Tiger Mountain Peasant Song and eye-watering greatness from such wonders as The Protector and Ragged Wood.

There was no one great moment in this 90 minutes of pure pleasure, although it was good to see the boys step away from “just another album” gig and add in something a little different. Robin, left alone on stage, performed a beautiful rendition of Judee Sill‘s Crayon Angers (and a short biog of her work) before running like a waterfall into ye olde ballad Oliver James. Ending without mic or amplification for Robin was a lovely touch for us at the front. The rest of the room had their fill with Mykonos before the group left the stage smiling and waving enthusiastically – like they had something to thank us for.