by Thomas May
published: 10 Nov 2012 in Live Music Reviews
Tweet 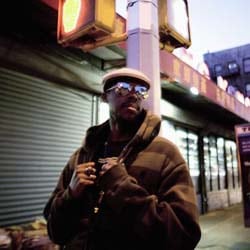 (a) Steven Ellison is a great showman. Taking on the role more of a DJ than anything else, FlyLo sculpts his live sets into a seamless, hard-hitting and bass-heavy sonic assault, playing cuts from his own records along with samples from a multitude of other artists. Ellison worked the sweatily ecstatic crowd at the Troxy this weekend with professional ease and endearing irreverence, dropping (amongst others) Kendrick Lamar‘s one and only club banger Backseat Freestyle as well as sampling Frank Ocean‘s Thinking About You and Portishead‘s Machine Gun. This hypertextual game was played with a blithe off-handedness that only added to the sense of exhilaration that rippled throughout the venue at the recognition of each new track, culminating in the most striking moment of the evening with Ellision fleetingly rapping along to DOOM‘s Gazzillion Ear.

FlyLo’s own tracks, although comprising a surprisingly small proportion of the evening’s music, were transformed by the venue’s colossal soundsystem: the low end was significantly widened and deepened, saturating the space with a fiercely visceral pulsation. Playing material spanning his three most recent records, Ellison continually proved that his music can be as intensely physical in a live setting as it is complexly cerebral on record. Throwing a multitude of exaggerated shapes from behind his laptop and surrounded by a three-dimensional stream of swirling Tron-like graphics, Ellison imbued his music with a verve and a vigour that framed the audience’s unavoidably enthusiastic response to the evening’s set. Hearing this music in a live setting serves only to augment Ellison’s nuanced and multi-layered sound-world.

(b) Flying Lotus’ music is not made to be performed live. Translating his music into a live setting serves completely to undermine the identity of his carefully balanced sonic sculptures, brutally compressing the nuanced and subtly inflected sound-worlds into a one-dimensional sonic barrage of over-powering bass. Despite Ellison’s best attempts to present his music in a visceral rush alongside a variety of more danceable cuts, by the end of his set at Troxy one could have been forgiven for asking whether hearing Clock Catcher and Getting There at several times the usual volume really does do anything to transform them into club bangers. Perhaps Ellison would have been better off emphasising the intoxicating, musty atmosphere of those tracks rather than attempting to force an incongruous reading of his music with his exaggerated performance style.

In drawing on numerous samples of other artists throughout the evening, Flying Lotus’ set felt like little more than a party mix, marked with hollow gestures towards an assembly of artists-of-the-moment. This superficial display culminated in a particularly uncomfortable moment as Ellison fleetingly rapped along to Kendrick Lamar’s uncharacteristically misogynistic Backseat Freestyle: “Damn, I got [sic] bitches.” Aside from the occasional, ethically questionable interjection, it was difficult to work out exactly what Ellison was doing throughout the set; frequently venturing away from his laptop to prowl the stage, he could probably have left the venue altogether without adversely affecting the evening’s music such was the pre-planned and pre-recorded feel of his set. Despite appearances, this was a curiously sterile evening of music that downplayed the unique qualities of Flying Lotus’ music whilst simultaneously instilling it with a new, faintly obnoxious edge.