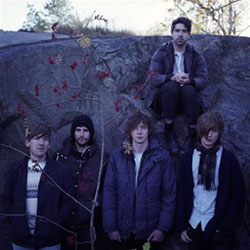 This years iTunes festival is a mixed bag. There are no huge headliners per se, (unless you count Ozzy Osbourne or Tony Bennett as huge) and the spotlight seems to be on lesser known but critically acclaimed acts. Using the Roundhouse has been a risk too; the venue has historical significance but it’s a big space to fill for small bands.

Two Door Cinema Club, who supported tonight, completely energised the crowd with their anthemic take on afrobeat ’80s jangle, setting the tone for a raucous night. Song after song was met with whoops and cheers from the youthful crowd. Their secret weapon is bassist Kevin Baird, adding a much needed feral element to their upbeat catalogue.

Showcasing material from their recent second album Total Life Forever, Foals have grown up fast. Gone are the jerky mannerisms and twitching vocals of yesteryear, in favour of an echo-laden, thunderous Sturm-Und-Drang and the occassional bout of real tenderness. Old numbers such as Balloons and Cassius were dispensed with early on, leaving the Oxford boys a chance to expand on and explore the new album’s material. More progressive in terms of length and tone, it marked a seachange in their performance.

Frontman Yannis Philippakis began slightly timidly hiding behind a fringe not seen since Robert Smith, circa ’82. In fact, The Cure is a good starting reference point from where Foals have taken their slightly dubby, slighty cavernous and mostly insular sound, with abrasive elements. He was occassionally distant, but the crowd’s desire to hear his every word brought him out of his shell. The addition of a percussionist seemed to put the whole band at ease. Guitarist Jimmy Smith took the opportunity to frequently go centre stage and show off his heavy metal chops, even on the almost twee recent single Miami.

There was a lot of showing off. Alongside climbs upspeaker stacks and a feedback solo, frequent Philippakis forays into the crowd caused confusion and excitable tension for both audience and bewildered band members.

If there was one highlight of the evening, it was set closer Electric Bloom. Not a particularly recent song, it wowed everyone with a new-found intensity. Stood beside his tom tom, pounding out the staccato beat, watching Philippakis was akin to witnessing primal therapy in action. Battling to keep the hair out of his eyes was no longer a problem for him; his whole body seemed to be covered in a sweat. It was obviously a punishing, personal number for him, sprawling out from its five minute recorded existence into a lengthy roar.

The houselights dimmed and the smoke machine cranked up, and the band came into their own. What could have become an awkward jam became ferocious. Even the annoying camera boom that constantly swept overhead seemed to be placated and all phones, cameras and recording devices dissappeared as the hall got swept up with emotion.

Second albums can be a tough prospect. You either carry on with an already comfortable and well recieved format or you try something new and risk alienating those fickle enough to want hits or repetition. Thankfully Foals have always been innovators willing to take a chance on the unpopular option. Who else would hire TV On The Radio‘s Dave Sitek to produce their debut, then decide afterwards that they could do a better job? If tonight was anything to go by, then album number three is going to catapult these guys internationally. For now, they’re burning a quiet storm.