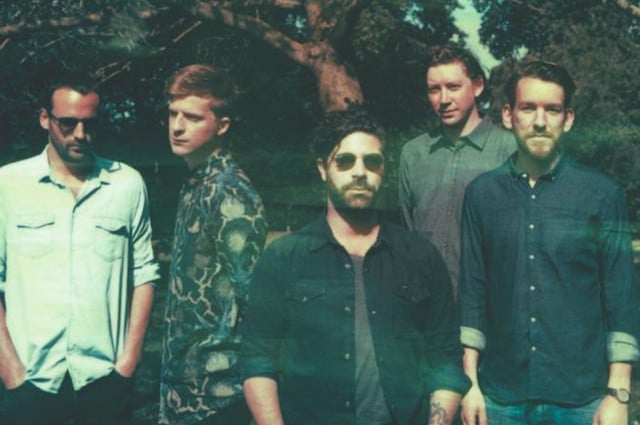 From an Oxford bedroom one decade to a London arena the next. The expansion of Foals is complete, but on the evidence of this tumultuous gig they are doing their best not to turn their backs on small-scale beginnings. But how to bring the subtleties of their early work to such a vast and cavernous acoustic as Wembley Arena?

Somehow they balance the scales. Singer Yannis Philippakis, a bundle of primal energy, pulls the strings – but equally the intricacies of fellow-guitarist Jimmy Smith, the prodigious drumming of Jack Bevan, the rock-solid bass of Walter Gervers and the virtuosic keyboards of Edwin Congreave give him the most solid of platforms on which to build.

Namechecking the band is important, because Foals are without question a team effort. Yannis may be the star and focal point, sweeping the crowd along – or getting swept up by them in closer Two Steps, Twice – but the joy and power of their music is communal.

The contrast between first and latest albums is striking but effective in concert. The Antidotes guitar lines, put to good use in Balloons and Olympic Airwaves, thrum with activity and percussive intent, the airy atmosphere suggesting other cultures much more vividly than Kula Shaker ever do.

Alternatively the foursquare hits What Went Down and Holy Fire are equally thrilling in their direct approach. These and Inhaler pulsate with energy and adrenalin, feelings that underride even the graceful beginning of Spanish Sahara or the majestic A Knife In The Ocean, What Went Down’s closing track. This is the night’s high point, where the surge of the surf is thrillingly told through massive, distorted swells of guitar.

Foals are the band with almost everything. They have tunes and driving rhythms, but also guitar parts whose origins lie some way towards the minimalism of Steve Reich. The versatile rhythm section can ape Stone Roses one minute (Mountain At My Gates), Led Zeppelin the next (Snake Oil) while remaining highly original. They may be a stadium-sized band now, dominating Wembley Arena with apparent ease, but the excesses are commendably few and far between, restricted to a striking light show and a barrage of ticker tape at the end. And all this without big hitting songs like Cassius and This Orient.

Support, in the form of good friends Everything Everything, is almost as successful. The band’s wordy tricks are surprisingly effective in the arena setting, revealing an underbelly of twisted funk not always obvious in their recent Brixton Academy triumph. Latest album Get To Heaven is the focus, No Reptiles its soaring, shimmering highlight – after which Distant Past gets misty eyed and heads for the dancefloor. This is a band with much to say and an increasingly invigorating way of saying it – and tonight both sets of wordsmiths have successfully scaled the summit of playing their largest venue to date. Who can hold them back?