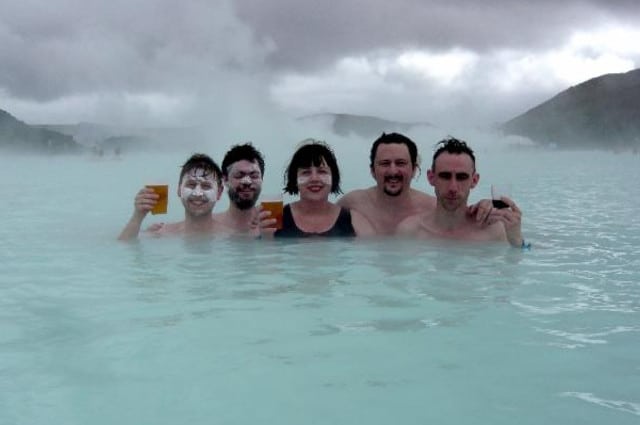 Withered Hand, one of Fortuna POP!’s many bands

At the risk of this reading more like a eulogy than a review, it’s impossible to reflect on these gigs without being slightly downbeat and nostalgic.

The series of shows – over five nights at venues across London – was dubbed ‘Twenty Years of Trouble’, a nod to the years the Fortuna POP! record label has clocked up (it was founded in 1995). During that time it has established itself as the quality stamp for indiepop, that jangling, melody-heavy, DIY middle ground between twee and punk. And soon it is to be no more.

Since the label’s founder/owner, Sean Price announced its closure, as he readies himself to move to Japan – via a column, nay a letter of sorts, in the programme at last summer’s Indietracks festival – there’s been a steady outpouring of grief. Who will take a chance on these bands? What about the annual Winter Sprinter festival which has, in recent years, acted as a showcase for so many acts? What now for the indiepop scene? The sense of responsibility must’ve been unbearable.

From Allo Darlin to The Pains Of Being Pure At Heart via Evans The Death, Martha and The September Girls, scores of bands have found a happy home at the London-based label over the years. And they’ve come out in force to bid him – and it – a fond farewell. Simon Love, The Butterflies Of Love, Darren Hayman, Comet Gain, Tigercats and Milky Wimpshake, are among the bands playing at this long farewell.

Thursday night’s show, at Bush Hall, really reflected the breadth of Fortuna POP!, despite the label’s seemingly narrow remit. The bill features the classic melancholic indie of The Wood-Be-Goods; former Weather Prophets and The Loft frontman Pete Astor; queer synthpopsters The Ballet and the life-affirming, anthemic guitars of Withered Hand. They sound worlds apart, but somehow they fit together like a slightly scraggy yet complete jigsaw puzzle.

It all comes to a head on Sunday night when, at a packed out Scala, the bands who are arguably Fortunate Pop!’s current hottest property play. Chorus Girl, The Spook School, Joanna Gruesome and Martha all play blinding greatest hits sets – with a few of them referencing the elephant in room: what next? While some labels might feel like natural homes for some of the label’s acts; Specialist Subject, Alcopop!, maybe…it’s hard to imagine another label bringing such a varied and chaotic community of bands together in the way Fortuna POP! has.

Sunday night’s show ends with a rendition of 4 Non Blondes‘ What’s Up, which sees Price propelled into the audience for his first ever crowd surf. He then invites the wider Fortuna POP! crew on stage for an emotional farewell, during which, in lieu of a speech, he reads out tear jerking lines from Big Star‘s Take Care, before leaning into the mic to say: “Right! We’re all off to the Lexington to get drunk!”

If one were to write a proper eulogy for Fortuna POP!, it probably wouldn’t be much different to that final scene.