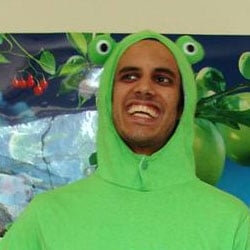 Breaking music down to its very essence might, initially, not give the average music listener or writer much to ponder. Music’s blank canvas can probably be expressed more readily by scientists and mathematicians than by the artistic. And yet Four Tet’s Kieran Hebden continually inspires and endears with the kind of sonic austerity that appears as formulaic waves of sound on fidgety computer programs long before it emanates from speakers as something anyone might perceive as art.

Hebden’s latest album, There Is Love In You, is his most 4/4-mechanical and consequently least complex effort yet. Less Aphex Twin-influenced than previous albums, Love harks back to the British and American dance music era of the late ’90s and early ’00s that spilled over into Ibiza for a few months of the year. The majority of the record plays like a homage to the house producers and DJs (Sasha in particular) that Hebden presumably idolised when dance music had a scene worth raving about.

A triumph of meticulous detail, rhythmic texture and intelligent restraint, Love exhibits a preference for subtlety when many would impulsively plump for overkill. But this isn’t an album without a soul. Even the album’s title and front cover do enough to suggest that, while there’s an appreciable lack of strings and crashing cymbals, Hebden hasn’t forgotten that dance music or being in love with a scene (or someone else, for that matter) isn’t all about 2AM euphoria. Although anyone can dance quite happily to much of the record, Love calls to mind the eyes-down or eyes-closed head and guts music of the Goa trance and progressive house genres; music that’s far less throwaway and more intellectually tangible than clubbier forms of house made to strictly move, sweat and Get Happy to.

In a typically hot, sticky and packed-in Manchester Club Academy, Hebden’s brief is obviously a little more limited. Although he’s stood behind a couple of laptops, he might as well be DJing behind decks at Plastic People, the club night where he gave many of the tracks on Love trial runs. After a protracted introduction, the gorgeous and immediately identifiable female vocal from Angel Echoes enlivens the crowd as hands are raised and cheers and whistles bring a warm smile to Hebden’s face.

Following a sped-up As Serious As Your Life from his earlier album Rounds, Hebden concentrates on giving the crowd what it wants. Both Sing and Love Cry are given extended outings, taking the club into raptures. But beaming faces turn to slightly bemused ones as the night finishes rather abruptly. House music and rock venue closing times aren’t the most comfortable of bedfellows, it has to be said. Ironically, after Hebden vacates the stage, a crowd waits for an encore that never comes.

Earlier, with a scarf oddly wrapped around his chest, someone slightly resembling Bib Fortuna plays tracks from his latest album. Happily, the thick techno basslines from Black Noise (Four Tet’s current rival for electronic album of the moment, and possibly the year) confirm that the well-dressed man is indeed Hendrik Weber – AKA Pantha Du Prince, Four Tet’s support for this tour.

If There Is Love In You is dance music without much garnish then Black Noise is richer and more indulgent. Akin to the music of the now defunct European trance scene, Black Noise is equal parts chiming melody and well-produced techno – something like a marriage of Paul Van Dyk and Brian Eno. Tracks are long, ethereal and reward patience with something sonically that’s pretty special. Two ways to approach electronic music. Two albums that will stand out, come the end of the year.