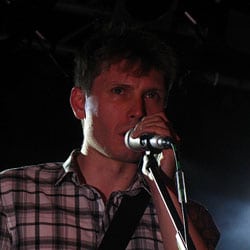 It’s time for the verbiage of African influences and Xenomania production diversions to cease. More than three years after their poorly received last album, Franz Ferdinand’s third album is ready for public consumption.

Tonight their public would get a taste of that album, called Tonight. It was all about the moment.

Worryingly for the Franz boys, support act Of Montreal grabbed the moment with gusto and put on an eyepopping show that gave the Glaswegian quartet rather a lot to better.

Of Montreal’s magnetic front man Kevin Barnes is known for stripping off on stage. Tonight he spared London’s blushes, removing glittery costumes from just his top half and singing through a face embellished first with make-up, then with cream (shaving, double… it wasn’t clear which). With an ensemble cast of mime artists and a wardrobe to furnish Priscilla, Queen Of The Desert, Barnes and his accolytes were so visual it was surprisingly easy to forget to listen to them.

Barnes’ chiselled features had eventually to give way for the no less chiselled visage of Alex Kapranos, a man surely with space in his attic for a self-portrait. In the years away his waist has not expanded and his face has yet to acquire lines. He looks like he takes to corniches in a cabriolet.

Despite the presence of synths on stage it’s clear straight away that Franz are not about to jump on 2009’s synthpop bandwagon. They kick off with a new one, No You Girls, that picks up from pretty much exactly where they left their ear for hits. It’s instantly recognisable as a Franz Ferdinand track – you can shamble drunkenly along to it, but it’s no more Xenomania than anything from their first two albums.

Send Him Away turns towards Africa for inspiration, but never quite leaves Europe. These sound like tentative explorations curtailed. Old hits are of course wheeled out too. Matinee is the first of them, but there’s little audience reaction. After Of Montreal’s boggling visuals, the extraneous stuff is banished and Franz Ferdinand, for all their catchy tunes, still give the impression of being preciously serious about their music.

Kapranos seems disconcerted by the lack of reaction, chastising his audience for being “polite” and finally eliciting some whoops. There are more for Do You Want To, one of the band’s most recognisable tracks, and finally the ice seems to be thawing. It’s a timely reminder of what originally caused people to hold Franz Ferdinand in high regard.

Take Me Out follows and cements the good vibes, but all these guitar-dominated numbers are played at the expense of the new album’s most interesting track Lucid Dreams. It’s not played at all. Pity.

The new record’s lolloping first single Ulysses closes the main set with a veritable rack of hooks, but of course they’re soon back for an encore of the still addictive This Fffire as the last of a triad of angular, shape throwing numbers to which Kapranos duly throws shapes, pirhouetting at one point and playing his guitar behind his head with backlighting.

Balloons and streamers, and the band collectively bashing the drumkit as though it’s been very naughty, herald the end of the party. They’ve kept a difficult audience on side after years away and looked as though making girls dance was something that still mattered to them. On this evidence, the comeback is still rattling merrily along on rails.