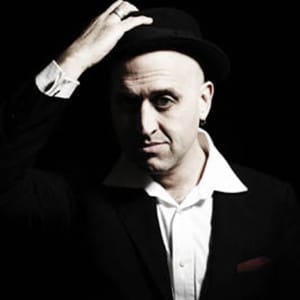 Tonight’s venue couldn’t more appropriate for Franz Nicolay – tucked away in a side street off Brixton Hill, it’s a packed boozer, plastered in posters and stickers left by bands who’ve already taken to its awkwardly crammed corner stage.

As punters file in, the man himself sits behind a table displaying an impressive array of merchandise, mapping out his prolific career. He looks tired, having driven up from last night’s show in Plymouth by himself; it’s very much a scene from this 15 date UK tour, which sees the Brooklyner driving himself from city to town, sofa surfing on the way. There’s something of an old fashioned storyteller about him; he’s living it as well as singing it.

A punk troubadour, Nicolay specialises in full-throated songs that splice a cabaret, circus-type world with the pains of real life. He’s a grafter, a multi-instrumentalist who’s been a member of The Hold Steady, Guignol and World/Inferno Friendship Society among others. And he’s an absolute delight to watch live. He has a sparkle in his eye and as many witty tales and bridges as he does songs. He’s a true entertainer whose works are joyfully brought to life on stage. As the audience cheer when he appears, he raises an eyebrow, quipping: “I think ‘woo’ too.”

For the next hour or so, he walks us through the characters and scenes that shape his considerable back catalogue, chatting away between songs to make sure we keep up. “I recommend writing songs that are fiction so that people don’t get offended… Saying that, this next song is absolutely true; it happened in Southampton…” he tells us, before launching into The Hearts Of Boston, with its distinctive refrain, “Never Trust A Man Without A Horror Story”, and layers of rumbling accordion.

He invites requests from the crowd – a fairly standard thing to do, but with Nicolay it’s risky. He often tours with a band, and his records – in particular his latest, To Us The Beautiful – very much rely on a bigger sound than even he, armed with an accordion, acoustic guitar and banjo – can produce. He also makes use of other vocalists. But he seems to enjoy this challenge; as he told us in a recent interview: “[touring solo means] I have more control over the dynamic of the show. I don’t have to use a set list. I can have more songs available to me on any given night.”

But it can be problematic. A song in case is Imperfect Rhyme – a popular audience request from the new record. Instead of being excited that someone has asked for something from a one month old album, Nicolay looks briefly panicked. His version tonight is stunted, as he forgets a verse. Luckily its rousing chorus makes up for it and all is quickly forgiven. The audience are happy to help out too, providing collective backing vocals for the beautiful Talk To Him In Shallow Water.

Other highlights include Did Your Broken Heart Make You Who You Are?, an almost unbearably personal version of I Had A Good time Tonight, which sees him coping with missing his wife on tour and an audience request of Frankie Stubbs’ Tears (which is served up with a typically Nicolay tale: “The first time I played this here, a guy gave me his jacket with a Leatherface patch on it. I still wear it…”)

His final song for the night is the triumphant, six minute protest song – the title track from his 2012 album, Do The Struggle. After which he carefully packs away his kit, before resuming his place behind his merchandise table. A drink in hand, his fans flock to chat. And he couldn’t look more pleased.