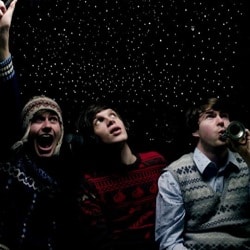 Shakira’s hips don’t lie. Ed Macfarlane’s hips don’t tell the truth. They tell of servingpina coladas to a bevy of Brazilian beauties at the Club Tropicana, where the dress code is shirts andloafers and it’s always 1988.

Which isn’t really something that Friendly Fires partake in – asidefrom the loafers. Anyway, let it be said, the Friendly Fires front man can dance. And, after a breathless few months, he’s got a lot to dance about.

An omnipresent presence atfestivals, murmurs of Mercury glory, the kind of slow-burning success that doesn’t really happenanymore – built on word-of-mouth; people listening, liking and passing on – Friendly Fires havenow become large enough for them to play to several thousand people in a large round shed, andfor it not to be a particularly big deal.

Although they didn’t exactly sound perfect tonight. There’s something about the Roundhouse thatseems to make everyone sound a little bit soupy. Maybe, given the bazillions spenton refurbishing this fantastic circular space, 40 more should’ve been spent onspeakers.

No doubt it’ll sound note perfect when you fork out your hard-earned lolly to download it from iTunes,but as someone who was there, spending half a gig clawing at your ears in the mistaken beliefthat someone had strapped a pair of pillows to the side of your head whilst you weren’t lookingisn’t fun.

And another thing. To the joyless bastard in charge of the graphical backdrop, find some otherjob where your verbatim associations between songs and sights actually are appreciated or,alternatively, show some artistic cojones. Jump In The Pool garnered an unchanging picture of apool. White Diamonds, a black background with some white rhombuses. The kind of monochrome thingthat you’d find innocent-bystander-endangeringly dull as a screensaver.

Not fair, and not accurate, because Friendly Fires aren’t dull. They don’t sound terrible.Despite all these burdens, which we’ll assume weren’t self-inflicted, this was a hugelyentertaining night. Although they did everything possible to stop it being an ‘event’ (appearingon time; playing for only 50 minutes) you just can’t argue with Friendly Fires’ ability to get a crowdgoing.

Skeleton Boy, despite containing your lyric “your love is all”, and being performed by a band whoowe a yelping, cowbelling nod to The Rapture, confusingly doesn’t sound anything like Love Is Allby The Rapture. Instead, it sounds like someone’s taken You’re Not Alone by Olive and turned itinto a blinding, hands-in the air anthem.

Jump In The Pool, distractingly literal backdrops aside, is dutifully sung back in word perfectfashion, while the epic rush of Paris is as euphoric as Wednesday nights get, this side of yourlocal monotheistic Bakhti-yoga session. Complete as it is with the kind of chorus that you feelduty bound to raise something – anything – to.

There’s an impressive robustness about Friendly Fires. To be this much fun under this set ofcircumstances certainly suggests there’s going to be no reason for them to stop dancing any timesoon.