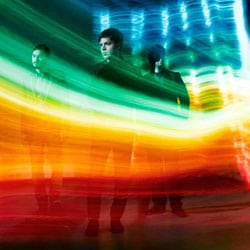 The weather in London these past few days has been nothing short of glorious and it’s the kind of climate where Friendly Fires’ debut album sparkles. Their combination of all things funk, Balearic pop and all manner of hip-shaking goodness was perfect for it. As they roll into the capital to preview their forthcoming second album Pala, part of the crowd wishes that this was an open-air party rather than a gig consigned to the basement of XOYO, which is so hot and stuffy it’s on the verge of being a sauna.

Not that you’d notice the sweat-filled air given the rays of light beaming across the stage and over the room. Given the smallish venue, the band have done rather well to create a lighting show that makes the space seem far bigger than it actually is. The most important thing is that there’s still room for singer Ed McFarlane to dance so well that it’s an almost an insult to those who are incapable of such impressive moves. When he’s in full flow it’s hard to take your eyes off of him.

The set was dominated by newer cuts, all of which sound promising and with every potential to be as successful as their previous work. Blue Cassette, with delightful crooning from McFarlane, was an early favourite, bearing some resemblance to Jump In The Pool, and Show Me Lights will also be a crowd-pleaser in the months to come. True Love is a tune that sprints with a soaring chorus (“All I want, is to feel, true love”) and Pull Me Back To Earth has similar qualities, with falsetto dominating its chorus. Too many of these tracks use the trick of following a moment of silence with a drop, but they work more often than not.

But with nearly all 800-odd people largely unfamiliar with the new fruits of the band’s labour, it’s the old favourites that ignite the crowd. The grooves of Lovesick get everyone on-side instantly whilst On Board and Skeleton Boy get treated as long-lost friends. It’s the trio of hit singles that garner the most arm-waving and body-shaking: Jump In The Pool, Paris (of course) and Kiss Of Life (complete with super-funky outro) are utterly euphoric.

All in all, 2011 looks like being very kind to Friendly Fires. Their energy was infectious and the smiles beaming across all of their faces suggest that they’re delighted to be playing live again. The new songs all sound like they could be mega hits, the older material is still incredibly fun and danceable and they know how to get a party going. When more people are familiar with Pala, the St Albans trio will have them eating out of the palms of their hands at the summer festivals and beyond.