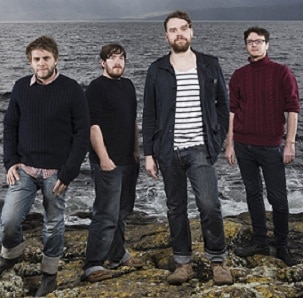 You can see where Atlantic are coming from; tracks like The Modern Leper and Square 9 – which bookend the main set tonight – sound like XFM-playlisted hits manque. That the band remains until this point a largely cultish concern might be down to their dark and frequently profane lyrics. (Indeed, The Modern Leper might be one of the most self-lacerating songs set to tape.)

The title track of the new EP isn’t an obvious expression of newly-inflated commercial intent. It’s a five-minute-long, postrock indebted slow-burner with no clear chorus and lyrics that apparently concern domestic abuse (and which also drop two big f-bombs along the way). No matter – it’s also one of the most beautiful things they’ve recorded to date.

It could well be that the band is holding back the big hitters for their as-yet-untitled fourth album, expected next year. The sole offering from that forthcoming attraction, Oil Slick, is a pummelling, big-sounding song which sounds like the band could have their sights set on venues many times bigger than this one.

Then again, maybe it’s a red herring. The new material is greeted attentively, but it’s when the band perform the (relatively) old stuff that the gig becomes something special indeed. Old Old Fashioned, The Twist, Swim Until You Can’t See Land, Fast Blood, Nothing Like You and Good Arms Vs Bad Arms are all rightfully greeted like old, sweary, lovable friends.

Adding to the beery bonhomie is Scott Hutchison’s audience interaction. Were the word not so debased through its association with city boys and (allegedly) racist footballers, one would describe him as a master of ‘banter’; suffice to say he’s a naturally funny guy who adds to the cheery atmosphere with sharp comebacks and self-deprecating song intros.

(Mostly) miserable words sung in a wholly joyous atmosphere: live music doesn’t get much more contrarily enjoyable than this.