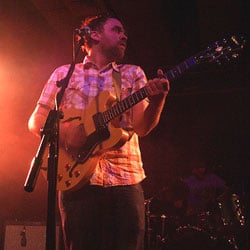 Scott Hutchison and his Selkirk mates who make up Frightened Rabbit faced the biggest crowd of their lives at a packed Scala.

The sell-out audience replete with more than a usual number of the FatCat-signed foursome’s countrymen, and checked shirts, was in expectant mood for a band whose music is nearly as huggable as their name.

They’d been warmed up nicely by new labelmates and compatriots We Were Promised Jetpacks, who were playing one of their first gigs in the big smoke ahead of the July release of These Four Walls, their debut album.

Early set nerves were quickly banished as singer and guitarist Adam Thompson’s forthright vocals gathered in more and more arrivals from the bar. Often stepping away from the mic yet still audible over his rhythm section, keyboards and his own guitar, his accented roar was a confident, impassioned anchor to the band’s material.

That material is mostly uplifting, occasionally soaring and compares with that of Glasvegas – not least because of the accents and build-up in volume. But wailing guitars and black leather are not We Were Promised Jetpacks’ stock in trade. Their powerful, catchy pop has more range, more mileage. Hook-laden single Quiet Little Voices, with its anthemic chorus and contagious rhythm, was an obvious highlight. But they have plenty of others just as intricately crafted.

Frightened Rabbit’s second album The Midnight Organ Fight was given a new lease of life by the release last month of live album Quietly Now…, and anyone who’s picked it up would already have an idea of what to expect from the band live, whose songs and banter are from the playful imagination of stubbly Scott Hutchison.

Occasionally they remind of King Creosote‘s raw, lonely set-up, none more so than on the opening minutes of the emotive Backwards Walk and its memorable line “you’re the shit and I’m in knee deep in it”. Good Arms Vs Bad Arms ranks among the contrasts to such sparse evocation, packing in harmonic segments ripe for singalongs. At one point a mandolinist pops up – during Old Old Fashioned, was it? – but it’s Scott’s propensity for memorable central lyrics that leave the longest lasting impression. Take this gem from Keep Yourself Warm: “It takes more than fucking someone you don’t know to keep yourself warm.”

In amongst plentiful and cheerily morbid banter Hutchison tells a merrily little tale about his mother’s reaction to his moving to Fife, across the Forth – apparently the phrase “moving to Fife” was regarded as a euphemisim for jumping off the bridge. Suddenly, Floating In The Forth’s musings on suicide could be taken in good cheer and with a spot of self-lacerating hindsight from its jovial writer. “I’m trying to ingratiate myself with a song about killing myself,” he laughs, shaking his head.

The end of the set gave an inkling of how they might have ended up on FatCat. With all four band members going for broke, drumming of a grandiose Sigur Ros nature sweeps the stage, cymbals crashing like waves against cliffs. The drummer responsible, Grant Hutchison, at the end all but thumps his chest like a primate before tossing his sticks into the crowd, the last of the four to leave after a face off with Scott and his guitar.

With whoops and claps ringing in his ears Scott returns solo, sporting an acoustic guitar, for an unamplified version of Poke. Some in the audience are unable to resist indulging in a spot of backing vocals, drowning him out immediately. He smiles, shakes his head as laughter erupts and the backing vocalists fall quiet again, allowing the charged atmosphere to return.

The rest of the band reappear during the applause and close out with a life-affirming singalong of a song from a life-affirming band. Their third album due later this year, Frightened Rabbit show every sign of being ready for a breakthrough.