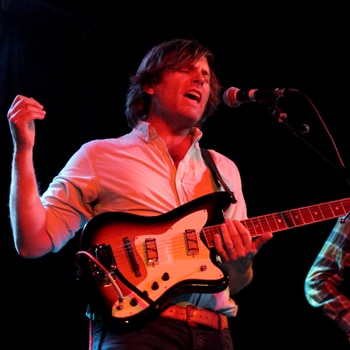 It could well be that Fruit Bats are one of music’s best kept secrets. Starting life as a solo outlet for Eric Johnson back in 1997 they’ve been a fully functioning band since around 2000. Since then they’ve slowly grown in stature, signed to Sub Pop, released a handful of well received albums (if perhaps under appreciated by a wider audience), and become something of a cult concern in the process.

Tonight’s set is culled largely from the recent past, and having recently released fifth album Tripper it’s unsurprising that they start with a raft of new songs. You’re Too Weird is a wonderful opener, although it’s fair to say that it is somewhat at odds with the majority of Fruit Bats material. Ordinarily lumped in with any number of Folk Rock bands, You’re Too Weird occupies a different space altogether. With its almost falsetto vocal and easy laidback groove there’s very little folk on show proves that the song writing of Johnson is versatile and deftly quirky. If anything there’s a hint of 70s rock on display with distinct Elton John and Bee Gees influences. Johnson is pitch perfect, and on fine form from the off despite some phantom feedback springing from his vocal mic. He might not cut the dashing suave 1980s figure that graces the wonderful tongue in cheek video for the song but he’s clearly trying with his shirt undone to reveal a tuft of chest hair and a pair of blue jeans teleported straight of the hips of Springsteen. Despite this outward air of sophistication, he’s not beyond breaking into his patented “monkey dance” which comes in handy later in the set as he attempts to divert attention away from the fact that he’s lost his tambourine.

After such an auspicious start, almost anything else could fall flat, yet the moment Tony The Tripper kicks in it’s clear that this is a phenomenally tight band with an abundance of killer tunes. Once again Johnson’s immaculate voice is the main focus, holding the attention as the tune smoulders gently before bursting into life. Heart Like An Orange heads back into folk territory, driven along with a series of fluid bass lines, and tight plucked guitar figures. A series of songs from the band’s previous album The Ruminant Band follow, the pick of the bunch being the laid back strum of Flamingo and the wonderfully summery melodies of My Unusual Friend. Following a spirited version When U Love Somebody, a wonderful West Coast stomp infused with a touch of hoedown thrown in for good measure, the band leave the stage. Or at least they try to. They get as far as the stairs before heading back for an encore with the war cry of “fuck the disco!” and launch into Dolly, a quirky rock’n’roll number that inspires an outbreak of dancing. It’s perfect life affirming stuff, and a reminder at just how fickle life can be. With songs like these Fruit Bats should be commanding larger audiences and greater acclaim.