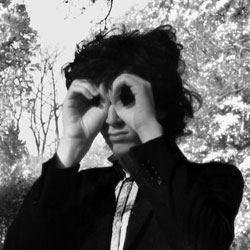 This 19-year-old Londoner is such an accomplished songwriter that on record he sounds like he’s been churning them out for aeons.

In fact it only took Ben Garrett, aka frYars, a few months since leaving school last year to show what he’s made of musically with the Ides and Perfidy EPs – both released to rave reviews and blog hysteria in pretty quick succession.

But he still has quite a way to go if he wants to do the same in a live setting.

Garrett has only done a handful of gigs and it shows as he nervously takes to the stage following sweet, electro-folk support from the tall and speccy James Yuill and a dull as dishwater set from Yves Klein Blue who unleash Libertines-esque, ska-tinged indie by numbers and cringe-worthy rock star posturing on a mercifully small crowd. The place is packed out by the time our headliner arrives but a lack of stage banter and his slight awkward demeanour result in offerings that are, though addictive, intelligent and admittedly note-perfect, lacking a little in energy.

For the most part, however, the music is enough to carry him – Olive Eyes making for a sublime electronics-driven opener, while The Ides and Happy both sparkle as Garrett’s rich, velvety croon echoes around the room backed by a tight trio of talented musicians. And the newies are just as powerful; one untitled track evokes the spirit of Clap Your Hands Say Yeah in its jangly melancholy brilliance and Jerusalem boasts a soaring chorus which is nigh-on impossible to remove from your head after just one listen.

The singer looks pretty adorable too, dressed down in tracksuit bottoms and plain t-shirt, his distinctive tight clump of curly black hair nods along in time to each song as he taps at his trusty keyboard. The Novelist’s Wife is tonight’s last song and Garrett performs it solo and stripped down, with just some piano tinkles to accompany him. It’s a dark-sounding and genuinely quite moving finale driven by clever and compelling lyrics which are typically frYars – it is in this area that he really excels.

While he may not yet look truly at home playing live, it’s surely only a matter of time before confidence comes, because with a growing back catalogue as exceptional as this, Garrett deserves to command stages and music collections alike.