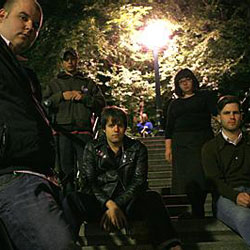 Having not heard a great deal of Canadian hardcore punk six-piece Fucked Up before tonight, you might say that having little idea what to expect and going in blind may have not been the smartest option.

But hey, it’s hardcore punk; how different can it be. It all sounds the same, right – most songs under two minutes and at an absolutely blistering pace?

Well, not completely. But then again Fucked Up are hardly conventional.

Eschewing the short-and-sharp standard practiced by the vast majority of their peers in the genre, they fully indulge in the experimental, with much of their back catalogue seeing song lengths more fitting to post-rock. A six minute hardcore punk song? Well I never.

It’s not just the chest-thumping wall of raucous sound that is crushing with Fucked Up, it’s as much the physical presence of gargantuan six-foot-plus lead barker – the inappropriately named – Pink Eyes.

(N.B. His eyes may well have been pink but you can go to hell if you think I’d get anywhere near them out of choice). For the best possible description of Pink Eyes – aka Mr Damian – think of Les Savy Fav‘s Tim Harrington plus about 20 pounds, with even fewer inhibitions, a voice to match his size, about three times as psychotic, and even more unashamedly excessive (yes, it is possible, amazingly).

If Pink Eyes were an animal he’d be a grizzly bear, and a chronically irate one at that. The rest of the band – all five of them – are almost irrelevant in such a setting, one which soon evolves into a bit of a bar room brawl, with a soundtrack of power-chords at break neck speed, thundering bass and pounding skin hits which you fear are never far from cracking the cranium.

It’s fair to say that so far in my time as music journalist the times I have feared for my safety have been non-existent, but tonight is the first time. Looking down as I scribble in my notebook is a mistake; within seconds Pink Eyes picks an unassuming reveler up into a full-on fireman’s lift and stomps towards me – thankfully it’s a near miss.

The over-the-top antics continue throughout and get more and more outlandish; bars are scaled, a mock hanging is attempted and failed, and there’s even a joking threat to assault “every last asshole in here”. Assaulting encompasses being in contact with Pink Eyes’ more than ample, perspiration drenched gut, for the record.

Every brilliantly brutal and thundering track is a like a bear-paw to the face, with hardly enough time to recover your senses let alone retain your bearings; just as soon as Pink Eyes is re-united with his band he’s off again; the apprehensive of those present sensibly shuffle to the walls.

A sledgehammer rendition of Crusades is undoubtedly the piece-de-resistance, a hardcore-punk opus like few others, whilst the crowd are sent into a frenzy, arms whirling and legs flailing around the pit, and Pink Eyes looks like finishing up is low on his list priorities, but somehow he manages to stop himself. It’s brash, it’s bold, it’s brilliant, and surely never before has a band been as aptly named as Fucked Up. And Fucked Up are just how it should be.