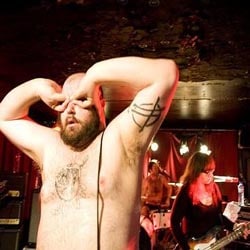 It’s Halloween, there’s a hardcore punk band in town, and someone’s come dressed as an iPhone. It’s not the most auspicious of starts, and there’s the very faintest fear that the Pitchfork stamp of approval could have sucked the soul from the Toronto hellraisers.

Certainly, the atmosphere at the Scala is a little lacking as Eagulls come on, singer George Mitchell dressed as Peter Sutcliffe, replete with mullet and sellotaped-on beard. Three songs in and they are removed to reveal a pleasant-looking young man who could easily infiltrate The Drums with little murmur, were it not for the anguished roar that emerges when he opens his mouth. The waves of bass-heavy rock’n’roll verge at times on the psychedelic, and the snatches of falsetto melody mark them out as a band to watch, even if they inspire no more than polite enthusiasm tonight.

When the troops that form the backbone of Fucked Up turn up dressed as babies, the venue is rammed. And when Pink Eyes, the biggest, hairiest, bounciest baby of them all, makes his entrance, any fears of a static or staid show are laid utterly to rest as he hits the barrier like a bear possessed.

The set draws heavily on material from their recent concept album David Comes To Life – a kind of American Idiot for the hardcore kids – and there is more common ground with the Berkeley pop-punkers than Fucked Up fans might care to admit. Not so much in their songs, which in a live setting lose some of their subtle edges and become ever-more energetic blasts of moshpit-inciting noise, but in their ability to turn a gig into an event and make a large venue seem so small.

“Halloween is not about taking my son trick or treating, it’s about playing concerts,” announces Pink Eyes near the start. And there’s a strangely paternal slant to his grizzly madman act. He genuinely cares for the kids in the pit; he wants everyone to have a great time and join in the games, and bestows a great sweaty bear hug to whoever wants one, even staying behind long after the lights go up to share the man love. He also has a canny sense of pacing; conducting a good-natured Halloween outfit contest from the back of the venue not only adds to the fun, but allows the crowd a breather before Ship Of Fools, a navy destroyer of a song with an enormous Who riff, lays waste to the Scala.

OK, so they’ll never headline Wembley, but they should come as close as a hardcore band ever should. Pink Eyes may never deviate from his throat threatening roar, but the music behind him is full of melody, and the crashing chords of Remember My Name and Son The Father, that open the set and the encore respectively, have a touch of the Springsteen about them.

In an era where smartphones and cheap digital cameras are sapping the life out of too many gigs, tonight is a triumph. The proof? The night starts with two security men manning the barrier. It ends with four.