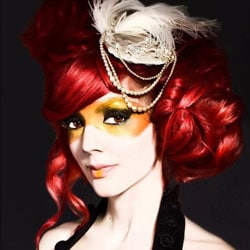 This concert is a celebration of Gabby Young And Other Animals signing to record label World Connection and the rerelease of their album, We’re All In This Together. There is also much to celebrate in the tenacious approach that got Gabby and her band to this position: starting her own record label, self-financing the album, devising a fan-club system comprising three echelons of ‘animals’ which provide fans with tickets, music and access to their sartorially-ingenious ingnue. A fairytale analogy is a good place to start in a story that seems to be progressing so well.

The Other Animals are the seven musicians who begin the evening alongside the lead singer: a brass section, a clarinettist with a saxophone strapped to her chest, a drummer in a splendid top hat, a double bassist, a keyboard player and a drummer.

They launch into burlesque-inflected gypsy swing number Ones That Got Away as Gabby conducts with an over-sized candy cane, a resplendent circus mistress in the midst of her players.

The look and the feel is as much a part of the Animals as the music. The ‘Gabadashery’ selling sparkly fascinators and sequin embroidered pants is a clue to that. Gabby herself wears a puffball blue dress like a giant body scrubber one might buy in Boots, resplendent with burnt orange Marie Antoinette hair. Her band, in earth tone work boots, waistcoats, braces, top hats and trilbies, fill the stage like the supporting cast from Les Misrables.

They parp and skiffle through the gleeful Horatio Interlude and Two By Two, gently swelling the ranks with the addition of a tuba here and an additional trumpet there (played by someone called Rory with a very enthusiastic fanbase of his own) and, towards the end of the set, a string section, leaving the metaphorical curtain to fall on a magnificent 17 of them, like a cut scene from Moulin Rouge.

But before that, there is time for Gabby to remind her devoted audience that she is a classically trained opera singer, and that her voice alone can carry the quieter songs beautifully. The lilting title track, We’re All In This Together, is plaintively plucked from a banjo while her clear, strong voice sings a song of inclusion. Too Young To Die tells of her brush with cancer; the stillness of the full stage adds a poignantly melancholy edge.

These gentle moments provide an opportunity to marvel at the organised chaos anew when the band spring back into action. The audience are physically prompted to join in as Gabby and saxophonist/clarinettist Charlie throw shaky percussion eggs and kazoos into the crowd.

After the frantic hubbub of Ask You A Question, the entire ensemble dutifully traipse offstage only to return a moment later – it takes the entire duration of an enthusiastic round of applause to exit and enter 17 musicians. The final song is a rousing waltz with a refrain demanding to know Whose House (are you in?). The transformation from west London arts venue to fin de sicle Parisian caf is complete.