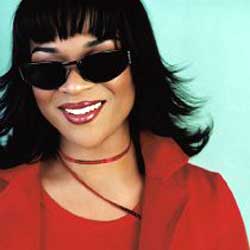 Gabrielle, the UK’s very own soul diva, returned to the vast Hammersmith Apollo for the second time in six months and, true to form, kept her shades and coat on despite the protesting suburbans before her in the audience. “Get it off!” yelled one. “You’d never come to my gigs again if I did,” was the giggling retort. We were left to speculate what multitude of sins were being hidden from us as the diva erupted into her set.

Gabrielle has recently released her Greatest Hits CD which, for someone with only three albums to her name, is not bad going. She of course had some time out after her initial success with Dreams and only really came back with the single Rise. Essentially, this was always a blatant rip-off of Knockin’ On Heaven’s Door – and at least at this gig she acknowledged the debt by launching into that very song half way through Rise. Sunshine and When A Woman were also aired.

Out of Reach was her big hit this year, taken as it was from the spectacularly successful film Bridget Jones’ Diary, but Out of Reach was performed very early on. As a result of this we thought we were in for a short set, but Gabrielle continued interminably with album material and what sounded like a medley of cover versions. We began to believe we were at an extended karaoke session at one point before she finally left the stage having delivered a polished performance that showcased her silky alto tones. She really is playing to the same crowd who listen to Lighthouse Family – her vocal characteristics aren’t dissimilar to Tunde from said collective.

Bizarrely, after a lengthy gap between the main set and the obligatory encore, Gabrielle appeared to be pushed out – literally, by two people backstage – to her public. Then the gig was over.

On our way out into the freezing December night, we negotiated our way around no less than five stretched limosines (presumably waiting to take people back to Essex in stereotypical style) and wondered if a polished performance was enough to make up for its predictability. But Gabrielle has her legions of fans – and her brand of light and slickly produced soul is several cuts above most of the manufactured nonsense presently populating the UK’s charts.