by Christian Cottingham
published: 9 May 2012 in Live Music Reviews
Tweet 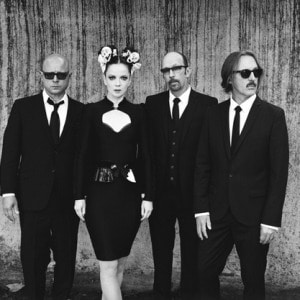 It’s mid-afternoon and East London is drowning, the air liquid and the ground a motion of raindrops and reflections against a palette of grey-brown. The gutters flow like taps, cigarette butts and sodden newspapers overtaking traffic as pedestrians fold themselves away from the sky.

Outside the Troxy fans are already massed, mascara’d eyes scanning from beneath hoods and clutched umbrellas for a glimpse of tonight’s performers. “London fans!” the band tweet, “Go inside!! Come back when doors open” but it does nothing, the crowd just digging in further against the winds.

Hours later, the doors finally open, and they’re clustered back from the stage, a mass of dark clothing and hair dye, ripped tights and buckles. Nine Inch Nails logos are everywhere, an unofficial sponsor. Just before nine o’clock the shrieking starts, from the front at first, then the sides, the balcony and the back: the darkening houselights elicit screams normally associated with a crowd being chaperoned by their parents. Garbage may have been gone for seven years, but their allure, it seems, hasn’t faded.

It never really stops, the screaming, ebbing and flowing and bubbling up throughout the ninety-minute set like feedback. In many ways it complements the band’s sound, a heady blend of menace, hysteria and desire. It’s mostly aimed, inevitably, at frontwoman Shirley Manson. Manson, the 90s poster-girl for alternative music, for a sexy Kerrang! – Garbage’s appeal was always locked into her, her bandmates relegated to a kind of pedigreed backing band, and nothing’s changed: from the moment she steps onstage all eyes are on her, and they remain there throughout.

She courts this, of course, clad like a burlesque dancer and teasingly working the fabric from her skin, and there’s nothing in Manson’s performance to suggest the insecurities and intimidations that she’s discussed in recent weeks. From the cut-up intro of opener Supervixen through the industrial stomp of Temptation Waits and Shut Your Mouth she inhabits her songs fully, a persona that veers from LA valley girl to Scottish bite with an energy and vigour that belies the band’s entry into adult years. Some of her stage banter feels awkwardly forced, sure, and at points she’s terrifying – introducing Only Happy When It Rains Manson fixes her gaze upon factions of the crowd, her tone blank as she utters “I see you people” again and again like a sociopath readying the blades – but in an era of increasingly plastic starlets it’s bracing to watch someone with actual presence again.

The others might just be shadows but there’s no ignoring the noise they make, from Butch Vig’s seismic pounding to Steve Parker’s familiar guitar squall, although the Troxy’s feeble PA can’t quite convey it with the force it deserves. The setlist, though, makes up for this shortcoming: a twenty-one strong Best Of that only really falters at the forgettable 1999 Bond theme The World Is Not Enough. Wisely it’s weighted to the past – we’re all here for regression, right? – although the smattering of new tracks that punctuate the set suggest that Garbage haven’t lost their knack for planting catchy grace notes amidst their industrial clatter.

Highpoints are many, from the siren-song of Milk to the barbed melodics of Stupid Girl and Cherry Lips, bubblegum pop with a heroin lace: predictably enough I Think I’m Paranoid gets the greatest response, Manson ceding vocal duties to the mass before her, their makeup and sweat commingling as they pogo the chorus. But it’s notable that these are cheers rooted firmly in the past – this didn’t seem so much of a comeback gig as an impeccably-rendered memory-hole, the band and crowd alike conjuring another era. This was a great gig, certainly, but do Garbage have a place beyond nostalgia, beyond an audience that would have screamed just the same had the band merely sat on the stage drooling into wooden bowls? That’s a question for later, after we’ve all stopped dancing.