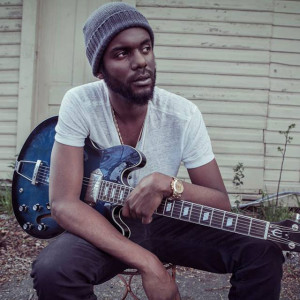 It’s a summer’s evening on the Strand, and Malian émigrés Songhoy Blues are delivering a joyously kinetic set, with pulsing bass and drums and scything, scuttling lead breaks pushing at the edges of the blues and stretching the shape of this venerable genre forward, sideways and out straight into the hearts and dancing shoes of a chattering Friday night crowd. Frontman Aliou Touré tells us they now see London as their second home and when they end their support slot with Soubour, from their well-received Music In Exile, we don’t want them to leave. Tonight’s show at Somerset House is part of the Summer Series, now into its 15th year: always a slightly odd affair, it’s a little like going to a festival in the grounds of a period drama, but one with constant reminders from the series’ sponsor to ‘realise the potential.’ One man that may not need telling twice to do that, whatever it might mean, is Austin’s own Gary Clark Jr. When you’ve been dubbed “the future” by the most powerful man in the world – President Obama having described him thusly after a White House event – you might not feel that you have to prove yourself, but Clark seems determined to do so from the outset: “You’re gonna know my name by the end of the night,” he sings on the slow, brooding Bright Lights. A totemic song for the Texan, it dates back to his self-titled EP, released in 2010, but was re-recorded for 2012’s major label album Blak And Blu, from which most of tonight’s set is drawn. A spirited Ain’t Messin’ Round is up next, a Stax-inspired stomp, with Clark declaiming “I don’t believe in competition/Ain’t nobody else like me around,” over distorted guitar stabs taking the place of triumphant horns. It’s notable just how rough and raw-sounding his take on the blues is, compared perhaps with other current big-selling, Grammy-approved US acts: more Jon Spencer than John Mayer, and fitting well into the space opened up by the likes of Jack White and The Black Keys. This comes over so much more in this setting than on Blak And Blu, and that album’s diversions into smooth R&B are largely eschewed here. When My Train Pulls In builds dramatically, Clark trading licks with his band’s guitarist, King Zapata, who is dressed in a large poncho and wide fedora, as if the Man With No Name swapped six shooters for six strings. The down-tuned, sludgy riffing of Numb has the after-office punters nodding their heads, and the front-porch acoustic stomp of Next Door Neighbour Blues is given a thrilling full band treatment. The pace and intensity barely drop for a moment during the main set: even on the lengthy solos of the late BB King’s 3 O’Clock Blues he holds the crowd’s attention, as tempting as it may be to gaze upon the House’s impressive neoclassical architecture or discuss plans to see that exhibition here on The Jam they’ve heard good things about. After ending with Don’t Owe You a Thang, Clark performs alone as an encore, previewing new songs Church and The Healing – “When this world upsets me/This music sets me free.” His band then return for the steady falsetto soul of Please Come Home before a final, tumultuous You Saved Me. At the end of a week that brought a less-than-popular new Budget and a tube strike in quick succession, it was not inconceivable that these Londoners would be ready to feel the blues, and tonight we were treated to two uniquely satisfying takes.