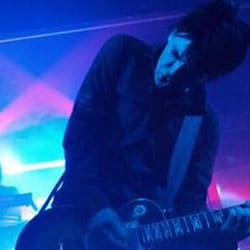 It seems there’s a strong desire among some gig goers to roll back the years and see old albums played in their entirety.

When Don’t Look Back started doing such things with The Stooges it seemed like a really good idea. To some degree it is – after all, over the last few years we’ve got to see Sonic Youth reimagine Daydream Nation, Slint run through Spiderland one last time, and this summer sees the coming together of My Bloody Valentine for a rendition of Loveless.

Gary Numan is no stranger to reworking old material – he recently played Telekon in its entirety. But it’s odd that an artist who gave us the sound of the future should look to the past for his recent tours. The nostalgia market gets the better of everyone.

No matter, for tonight sees Numan playing his classic album Replicas and expectation is high. As always the audience is packed with Numanoids, his loyal fans who have been with him on every step of his career. Every song is greeted with the baying of “NUUUuuuuMAAN, NUuuuuuMAAN” like a football chant generated by a chorus of the dispossessed.

It’s easy to see why Numan attracts the kind of fan that many would describe as “outsiders”. His music (particularly from the Replicas/Telekon period) was a kind of isolated rallying cry to the dispossessed. You can hear it in the songs tonight; the likes of Me! I Disconnect From You resonate wildly with the audience, its twitchy paranoia made large in the hall. It’s immediate, inclusive and yet seems to speak to everyone on a very deep individual level. Even the instrumental electronica of I Nearly Married a Human somehow sends shivers down the spine. This might be nostalgia, but it is far from kitsch.

Replicas might be the album that many electro bands cite today as a major influence, but what is sometimes forgotten is the album’s rock aspects. This suits Numan’s current way of approaching songs. His most recent album Jagged reclaimed Goth Rock from the likes of Marilyn Manson and Nine Inch Nails and integrated it into Numan’s own sound. Tonight’s reworking of Replicas has a much more rock edge to it than the album ever did. Watching Numan mumble his vocals and then attacking his guitar with rock star vigour, you almost forget that he’s just turned 50 this year. He’s got more energy than bands half his age, and from the way he plays you can tell these songs mean as much to him as to his fan base.

Wrapping things up with a distinctly gothed up version of Are Friends Electric? it’s not long before he’s back to treat us to a few tracks not from Replicas. Having not been on the Numan set list for some years, Cars makes a surprise appearance, presumably as a crowd pleaser and for those here on the strength of The Mighty Boosh patronage. It’s lacking somehow, but it is good to hear it again. He then heads further back in time to pluck Every Day I Die from the first Tubeway Army album, and then back to present day with Prayer To The Unborn from Jagged neatly book-ending his career.

All of which proves that, as far as songwriting goes, Numan still has plenty left to give. This may have been a thrilling glimpse of the past, but the future still seems just as exciting.