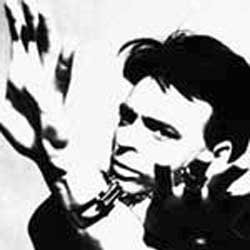 Gary Numan‘s first studio album of original material since 2000’s Pure was released this week, and tonight’s packed gathering at Kentish Town’s Forum was billed as the album launch. It featured an enduring characteristic of Gary Numan gigs – the militaristic chant of “NOOOOOOO-MAN! NOOOOOO-MAN!” from the enthusiastic and fiercely loyal audience.

Right arms pumping up and down, as if in tribute to some totalitarian leader, these Numanoids are an assortment of goths in black, pervs in PVC and – still – a sizeable number of relatively dull dressers in scruffy jeans and anoraks, teenage to fiftysomething. Numan’s longevity and recent resurgence attracts industrial rock fans to his newer material, electrophiles for his late ’70s Tubeway Army spell and all sorts of people in between.

Numan’s sound these days comes from a place familiar to Nine Inch Nails and Prodigy fans – angry guitar stabs and high end synth shrieks in the full-on choruses and eerie, echo-laden verses shot through with pulsing, robotic rhythm. It is a dark world, and for tonight various cameras flew about recording it all, presumably for a future DVD release.

Numan himself, appearing after a lengthy lights-led build-up, might be hailed as the electro godfather but tonight he was a singing gothfather, on stage a compelling cross between a spiritually fascinated Trent Reznor and Sally Bowles. Clad in black and with make-up in place, he struck a lithe figure, throwing star shapes, sidling around his stage in circles like an unfed panther, retreating backwards into shadows and smoke, coming forward to pout at the front row from atop a monitor amp.

One of his guitarists also plays with Prodigy, and was off doing that tonight. His stand-in appeared in full skinhead regalia, complete with ripped blue jeans and bovver boots. He bounced across the stage as though choreographing a dance routine, at various points hogging attention reserved for his front man. His energetic, rough-hewn appearance contrasted visually with Numan’s stylised poses and theatricality to watchable effect. Behind them, the back line consisted of two synth players, a bassist and drummer.

Jagged is, according to Numan, “a bedroom album”, but tonight it translated well to the live stage. Purposely without singles length tracks, most of the songs clock in around five to six minutes, and after they were all aired, little time was left for older material.

Haunted, the midpoint of the album, was a particular highlight, alongside the robotic, industrial make-up of Halo. Both allow Numan’s instantly recognisable voice to chilingly whisper verses and howl chorus. Later, Melt’s searching refrain “sometimes I wonder if God laughs at me… sometimes I wonder if a soul can cry” put beyond doubt Numan’s lyrical preoccupations.

But matters of the soul aside, in the centre of the audience a big white fluffy bunny was being waved about, and by the end of the set another cuddly toy had been hurled towards Numan. For all the deep rock star motifs of the set, he had the good grace to rescue it and take it with him as he acknowledged applause for his new material – a small gesture, but one indicative of a man who cares about his fans. Famously, of course, he even married one.

Jagged aired, the “NOOOOOOO-MAN!” chants began again, precipitating a brief encore, starting with a blistering rendering of A.R.E. Friends Electric? Numan’s staple signature piece throughout his long career, recently popularised all over again by Sugababes, the current rendering’s arrangement slots in to the brooding, industrial soundscape that characterises Jagged.

Of his last album, Pure, nothing was heard at all, and even Cars was for once left out. The set closed with a Tubeway Army number by 10:30pm. Anyone expecting a greatest hits homage to himself from Numan evidently has a while to wait yet, and while back catalogue omissions may have disappointed some, tonight’s performance was by an artist still enjoying his craft.