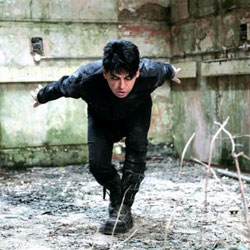 It’s extraordinary to think that electro as we know it is 30 years old. Of course that depends on your take on the style, but the assembled hordes of North Greenwich were tonight of the mind that Gary Numan’s The Pleasure Principle was where it all began.

Its author, of course, has moved on musically and personally since then. Yet there was a laudable desire on the part of Numan and his band to recreate the original sounds from the album with as much attention to detail as possible.

This meant that slow melodic lines from Numan’s synth floated above brilliantly executed drum fills, while guitarist Chris McCormack found himself shoring up the sound with a one-fingered bass on his keyboard, as fascinating and slightly humourous to watch as it was deceptively difficult to play.

What was also surprising was how some of the music is slower than you might expect (if we assume you know the album). That may of course come from hearing M.E. in its sped-up form, used as a basis for Basement Jaxx‘s Where’s Your Head At? What the reduced tempo did was emphasise how surprisingly graceful this music is, refuting any notion that electro is a cold, emotionless animal.

The album was performed in its entirety, virtually without a break, and made a considerable impact. Once finished, there was a sea change, with most keyboards save the hallowed Virus replaced with guitars – and suddenly Numan, and his band in particular, were more at home.

There’s a real punch to the new Gary Numan sound, and in this case with the melodies of Down In The Park and Pure it was possible to see how he could appeal to both fans of Nine Inch Nails and even Linkin Park. Dark, dramatic soundscapes were raised from the depths, often to return whence they came, while Numan and his two guitar wielding protagonists prowled the stage as if looking for some action.

There was a moving tribute to Numan’s old band mate Paul Gardiner, who died of a drugs overdose in 1984, which was given in the shape of Complex. This featured another former cohort, Chris Payne, playing a graceful and affecting violin line.

Things came to a head, however, with a stunning version of Are Friends Electric?, introduced by a stately piano but soon bolstered by heavyweight guitars, punching their weight with impressive heft. While many of the fans towards the back left after this they still missed a treat, the two encores of We Are So Fragile and A Prayer For The Unborn combining grace and power before Numan offered his heartfelt thanks to London. In turn, London gave him a rousing reception. He’d earned it.