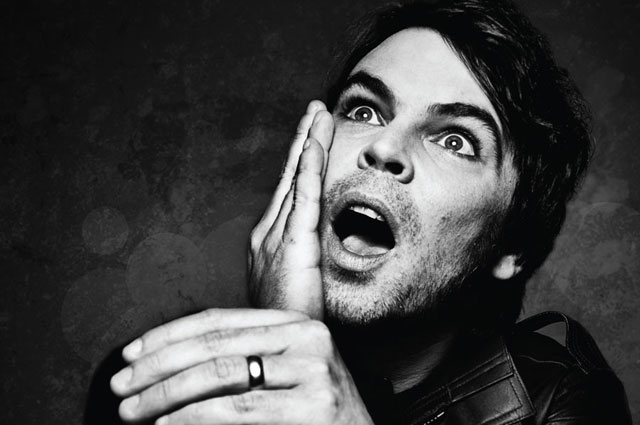 Modesty is one of the first attributes you notice about Gaz Coombes. As this gig progresses that observation is soon followed by admiration, as he confesses this is one of the biggest gigs he’s ever done. The Forum crowd is rooting for him and he draws from that, confidently delivering songs from a number of guitars or seated at the keyboard.

It is perhaps a surprising admission, but is revealing too. Having been in a band as big as Supergrass for 20 years, you might reasonably think Coombes can deliver these gigs as second nature, even though Supergrass were never given the full credit they deserved for the records that came after the wonderful I Should Coco of 1995. Sometimes we are far too spoiled with our music here in Britain.

But the revelation reveals that as the memories of the band fade a little, Coombes has really stepped up his own musical career, and that it means more to him now than ever. With an experimental thread running through his music, there is more obvious and direct emotional input, and this becomes evident as soon as he arrives on stage at the Forum. For a while the audience stand completely unacknowledged, the front man wrapped up in ensuring everything sounds right. A rendition of Needle’s Eye from this year’s Matador, his second album, remind us that his piercing voice sounds as good as ever – but that now the songs are deeper and stronger.

Coombes and his band are a tight unit, but they don’t often get to rock out with pure abandon, often changing speed during songs that dart this way and that. Because of this a curious tension builds, released at moments like the soaring apex of Needle’s Eye – “don’t let nothing tear us apart” – or the headstrong chorus of Detroit. Here the tension is lyrical, Coombes singing, “There’s panic in my heart, Oh the times I feel it, it’s tearing me apart”. The deeply poignant The Girl Who Fell To Earth strikes a resonant chord with every heartstring around the Forum, most of the crowd listening intently, while a similar intensity and tempo marks Seven Walls, the sparse texture pointing all attention towards the vocal.

There is, quite rightly, no Supergrass material tonight, for Coombes has in his locker two extremely fine albums – and is now building a solid arsenal of his own anthems. White Noise is one of those, the lyric “I’m always trying to tell you, I’ve got problems that I can’t work out” particularly meaningful. The soaring 20/20 illustrates how exposed Coombes’ vocal has become, suspended above nothingness.

It is a fine gig, and the vocalist is delighted with the euphoric response. He is part of the way through his second big musical journey, and the signs are he will be in this one for the long haul too.