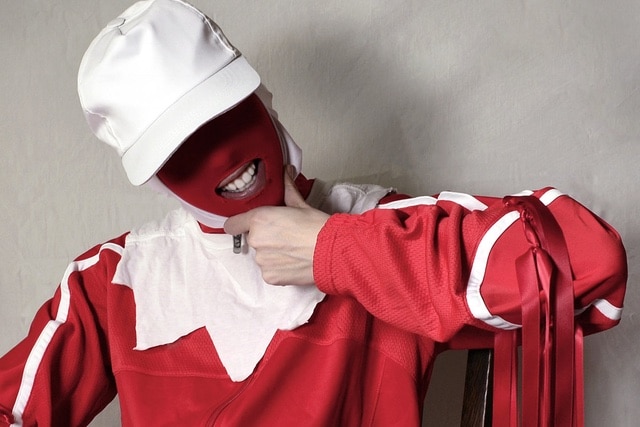 In typically British fashion, the stock response to shambolic calamity is to grin and laugh at the disaster which is unfurling. Particularly if that disaster impacts you. That’s all the better. Self deprecation is so much better than normal deprecation. What fun. What japes. What joy. For Elizabeth Bernholz, the shambling calamity of a nation sliding into parody formed into bewilderment, fear and, ultimately Pastoral, the latest and possibly greatest album she’s made as Gazelle Twin.

On it she’s also reincarnated Gazelle Twin into a new character. What was a blue tracksuit clad, nightmarish vision of childhood trauma on Unflesh is now an impish jester, peaking out from the bucolic fields of England in bright red garb. Faceless apart from a toothy smile.

Tonight Pastoral is the basis to be reworked with NYX: a ‘drone choir’, composed of opera singers, contemporary musicians and producers and led by vocalist and composer Sian O’Gorman. This is one of a series of performances they’re involved in, with various artists, behind which is the stated idea of replacing digital instruments and field recordings to create a euphoric collective experience for those watching.

Visually, that means that Bernholz maintains the red, but the character appears more Bride Of Satan than giggling fiend. For the choir flanking her, five on her right and four on her left, it’s more black veils / professional mourners at a state funeral. So it’s odd, it’s disquieting and it’s generally off-putting. And for a record at least tangentially about Brexit there is a certain sense of: what the fuck is going on. Really and, more so now than ever, what the fuck is going on? Which is, you know, kinda on the nose.

The opening, fogs and faceless voices swooping from left to right, is a sepulchral electronic walk “across England’s mountains green” – literally, as through the fun the snippets of pristine female voices form what at one time used to be Vangelis’ Jerusalem. Folly becomes more human. On the album the disembodied vocal gave it a questioning tone. Someone who genuinely didn’t know trying to work out “what century is this / what species is this?”. But here, the voices are rhetorical and plaintive and wholly sadder. Both Better In My Day, with arias from either side battling the chattering whispers, and the pitch shifted cut’n’shut voices of Throne, are weird and disconcerting. As were the originals: weird and disconcerting, and impossible to place.

In some way, that may be slightly detrimental. Given the discombobulating tone of the source material, it was always going to be hard to recreate something so jarring. Once something sounds otherworldly, you’re less concerned about precisely which other world it’s from. Still, it’s an impactful and makes for a memorable if short show, certainly one which further demonstrates what a remarkable record Pastoral is.